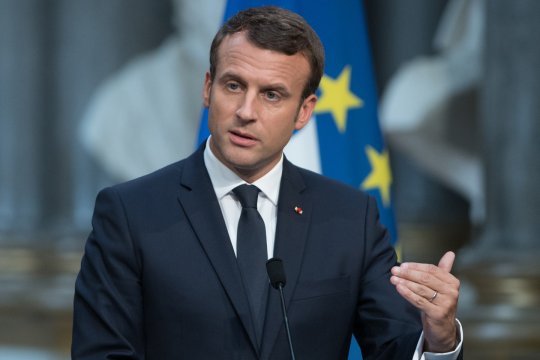 On November 6, French President Emmanuel Macron reiterated his call for creating a "European army," "real pan-European armed forces." According to Paris, the EU needs an army to protect itself, “taking into account Russia, China and even the United States” [i]. Speaking at the European Parliament a few days later, German Chancellor Angela Merkel generally endorsed Macron’s idea reiterating Berlin’s proposal for the creation of a European Security Council. US President Donald Trump and NATO Secretary General Jens Stoltenberg were quick to criticize the Franco-German initiative, emphasizing the need to maintain the priority of the North Atlantic Alliance. Austria and the Netherlands have also spoken against.

High-ranking officials in France and Germany have been increasingly in favor of bolstering the “European defense identity” since May 2017 when, in the wake of the first NATO summit, attended by the newly-elected US President Donald Trump, Angela Merkel said that Europe could no longer rely on America. Even though this caused an initial stir among European politicians and experts, the idea has since gained traction becoming a mainstream one. The outcome of the 2018 NATO summit only heightened Europeans' fears that, after the end of the Cold War, the geopolitical interests of the United States in Europe are to undermine Europeans’ competitiveness in the world.

Moreover, in the context of current transatlantic relations, i.e. due to the upcoming changes in US foreign policy following the midterm congressional elections and the easily predictable clash with Democrats in the House of Representatives, fraught with bogging down the president’s legislative agenda, the international arena is becoming a place where Donald Trump can showcase his political adeptness to his.

Moreover, restoring trust with Europe and other traditional allies can not only smooth out inter-party frictions in Washington, but can also generate a positive emotional response from the American public. Having this in mind, Europeans would certainly need to show their determination to move towards strategic autonomy as an additional bargaining chip.

Another important tactical factor for the EU leadership and the leading EU countries is the coming year 2019, when Europeans will be electing a new president of the European Commission, president of the European Council, head of the ECB, and hold elections in May for a new European Parliament. The informal coalition of advocates of revival of national sovereignty is gaining strength in the EU. Backed by the governments of several Central and Eastern European countries, one of the leaders of the current Italian government, “nationalist” Matteo Salvini, may challenge the “globalists” led by French President Macron and turn the European Parliament into a bastion of euroskeptics already next summer. Under the circumstances, the agenda for creating a common army allows EU leaders to replace the subject of national sovereignty return with the one of gaining sovereignty for Europe.

Meanwhile, the issue of pan-European military construction has been studied for quite some time now and with good reason too. Despite all its strategic might and active formal involvement in the war on terror, NATO has proved itself incapable of playing a significant role in combating new threats to European security such as local network terrorism and humanitarian challenges. The avalanche-like influx of hundreds of thousands of refugees, including victims of forced “democratization” of “rogue states,” some NATO members actively participated in, has left the European Union bitterly divided, precipitating Britain’s decision to leave the EU and even raising doubts about the very future of a united Europe.

Besides, Europeans have grown tired of being in a state of nervous uncertainty caused by Donald Tramp's “blackmail of Europe with the US’ withdrawal from NATO.” The current situation where without the US NATO practically loses its combat capability, turns Europe into America’s hostage when it comes to security matters. This also prevents the EU from acting more independently even in Europe, let alone the world.

“European sovereignty” is thus becoming a major priority for the EU leaders. In late August, Emmanuel Macron and German Foreign Minister Heiko Maas both emphasized the need for Europe to pay a new role and “strengthen” its position in the new balance of forces emerging in the world. Macron spoke about the need for the EU to “guarantee its own security,” and Maas mentioned a “sovereign and strong Europe” as a foreign policy priority for Berlin.

"I do not believe that China and the United States think that Europe has a level of independence comparable to their own. If we fail to build it, then we are preparing a dark future for ourselves," Macron warned [ii].

The two leading EU countries, Germany and France, are clearly concerned about the growing challenges to their leadership. Many in Europe traditionally perceive Russia’s and China’s growing assertiveness in the world as a “threat” and “increasing pressure.” However, even in NATO "with the exception of Poland and the Baltic countries, other members see no signs of Moscow planning an offensive. By contrast, NATO members in southern Europe insist on paying more attention to the southern borders of the alliance," the German daily newspaper recently wrote [iii]. Moreover, it was not Russia that set in motion the process of scrapping the INF Treaty Europe has benefitted from for many decades.

Meanwhile, Washington is clearly trying to drive a wedge between Berlin and Paris. And also supports euroskeptics throughout the continent. As a result, Germany is “balancing on the brink of a trade and economic war” with the United States, and from within the basic foundations of European unity are being challenged by “populists and supporters of authoritarianism.” Thus, Germany objectively needs a more "thorough" military policy in order to be "taken seriously", both in Europe and elsewhere in the world [iv]. In his turn, French President Emmanuel Macron seems to be quickly losing illusions about his ability to build “partnership” relations with the current occupant of the White House.

Finally, Paris, Berlin and Brussels have not yet abandoned their plans for further centralization of power in the EU. However, in this case Germany would inevitably increase its clout. Meanwhile, mindful of their extremely controversial “historical legacy” the majority of Germany’s neighbors, namely the “small” European countries, are increasingly gravitating towards the United States - even to the detriment of the European agenda. The EU needs a structure capable of providing its members with “political protection against each other” comparable to that of the US. Hypothetically, the “EU army” is capable of playing exactly such a role. In any case, Paris and Berlin are apparently mulling a similar option.

That being said, there still remain a number of serious obstacles on the way of practical implementation of the plans for independent military construction in Europe. Therefore, it is absolutely unclear if anyone in the EU is able to assume the role of the military-political leader of Europe. Britain has always been opposed to the idea of a European army. However, being the strongest military power among all EU countries, it has served as one of the main guarantors of the Union’s security. But Britain is now leaving the EU. The German defense policy is in a state of prostration, and some of the leading political forces now want to mend fences with Russia. France’s military resources are increasingly focused on fighting the terrorist threat, both at home and in Africa.

Besides, the EU’s two leading powers – Germany and France – are deeply divided over the issue of European military construction. Paris’s foreign ambitions, especially under the new president, are way bigger than Germany’s, fueled by the country’s nuclear potential, the status of a permanent member of the UN Security and the size of its GDP. In the case of Germany, however, any drastic unilateral military buildup can only add to fears of the revival of the “German diktat”. As a result, while generally supporting the French idea of the “European army”, Berlin is strongly opposed to its use outside the EU. France, in turn, is skeptical about Merkel’s ideas about the EU getting a seat on the UN Security Council and the formation of a European Security Council with a view to enhancing the EU’s role in global politics.

Not all EU members endorsed the recent initiatives put forward by Macron and Merkel. Austria has already officially rejected the idea of a European army, citing its neutral status, and the Netherlands has proposed maintaining NATO’s leading role in European defense policy. In the US, there is an opinion that the European project is on the brink of collapse. Under these circumstances, Washington is being invited to present NATO as a new unifier of Europe since even Hungary, Poland and Italy, which are getting increasingly skeptical about the EU, the idea of NATO membership remains "very popular" [v]. And last, but not least, Poland’s persistent desire to deploy a US military base on its territory outside the framework of the formal mechanisms of the North Atlantic alliance is an indirect sign of mistrust of the military prospects not only of the EU, but even of NATO.

At this point in time it is hard to foresee what exactly could have unpredictable consequences for European security – the EU, which is cracking at the seams and “grasping” at NATO’s “straw, or an EU “reformatted” under the auspices of an autonomous military machine with an ambitious French “driver” and a solid German “engine”. It seems that acquisition by the EU of its own military capability could help Europeans get rid of a number of geopolitical hang-ups, above all vis-à-vis Russia. At the same time, this would not enable Brussels to singlehandedly “maintain or stabilize peace” on the continent. Acting alone, Western organizations, such as NATO or the European Union, cannot adequately respond to security challenges, because they do not include all European countries. Unilateral military alliances or coalitions only weaken the “unity of the common security space.”

Russia’s position remains constructive, unchanged and consistent: European security is indivisible, and attempts to “ensure its security at the expense of others” are doomed to failure.

[ii] https://www.inopressa.ru/article/28Aug2018/lefigaro/macron.html  Meanwhile, as early as on June 14, Macron called the US France’s “main ally” and an “inevitable partner” in matters of national security.