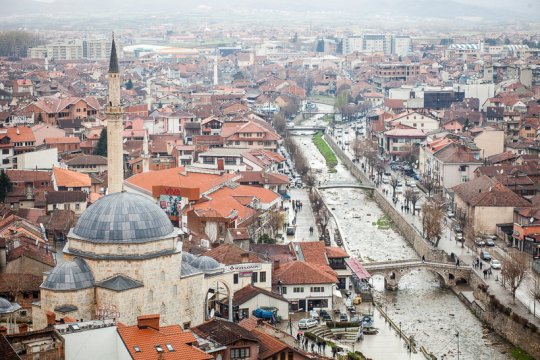 The European Union is planning to hold an important summit on Kosovo in October this year with a view to get Belgrade and Pristina to normalize bilateral relations. French President Emmanuel Macron and German Chancellor Angela Merkel will pose as guarantors of the deal. Reports say a senior US official may take part in the Paris summit as well. The participation of the American side was strongly advocated by the authorities in Kosovo, headed by President Hashim Thachi.

If this scenario goes ahead, Serbia may face pressure from both the USA and the EU. The West plans to require Belgrade to not only de facto recognize Kosovo but to confirm the course for European integration - which, according to Brussels, means departure from a comprehensive partnership with Russia and from the signing of a free trade agreement with the Eurasian Economic Union (EAEU) scheduled for the end of October.

Given the situation, Serbian leaders are set on consolidating Belgrade’s position in the forthcoming talks by reducing international support for Pristina. To this end, Belgrade is trying to persuade countries that previously recognized Kosovo’s self-proclaimed independence to reconsider their positions and withdraw their statements. Serbian Foreign Minister Ivica Dacic has already announced in wake of consultations on the sidelines of the UN General Assembly that the number of countries that recognize Kosovo’s independence will dwindle by the end of this year. According to Dacic, such countries will make up less than half of the world community.

According to the Serbian Foreign Minister, the Serbian delegation led by President Aleksandar Vucic succeeded in holding talks in New York with representatives of about a hundred states on withdrawing recognition of Kosovo’s independence. “The President spoke with representatives of some states about strategic issues, about a dialogue with Pristina, but there were also many meetings dedicated specifically to the status of Kosovo and Metohija. As the president announced, our citizens can be sure that in the near future the number of countries that will withdraw or “freeze” their recognition of Kosovo will increase,”- Ivica Dacic said. [1]

In recent years, the number of countries that recognize Kosovo’s independence has decreased, though so far mainly due to small American and African states. Among them are the Comoros, Dominica, Suriname, Liberia, Sao Tome and Principe, Guinea-Bissau, Burundi, Papua New Guinea, Lesotho, Grenada. [2]

The persistency with which the US and the EU is trying to “press” for the normalization of relations between Belgrade and Pristina and force Serbia to cut down on its active cooperation with Russia has yet again pushed the Serbs into streamlining their national foreign policy priorities. According to available data, Brussels is ready to slap more conditions on Belgrade, including the most painful of the Balkan issues, not only on Kosovo, but also on Bosnia and Herzegovina. For one, as Serbian Minister of Technological Development and Innovation Nenad Popovic said,  one of the conditions for Serbia becoming a member of the EU could be recognition of the “genocide” in Srebrenica.

This is confirmed by Zoran Milosevic, an expert at the Institute for Political Studies in Belgrade, who sees the new condition as nothing unexpected, since some EU member states, and also Switzerland, have passed a law that envisages criminal liability for the denial of the so-called "genocide in Srebrenica." Some  European countries are already following suit having drafted the relevant bills to be submitted to parliament. “Something of this kind was proposed by the High Representative of the international community in Bosnia and Herzegovina, Valentin Inzko. What is the point of adopting laws in defense of this counterfeit on the genocide in Srebrenica if they do not make a condition for Serbia's membership in the EU?” - Zoran Milosevic points out. The mere word “condition”, he says, signifies that Serbia “is treated as a minor who needs to grow to perfection and fight tooth and claw to enter the EU”. Serbia “accepted this burden of its own free will” the day its parliament passed a resolution according to which the country's strategic goal is European integration, ” - said the Serbian expert.

He also made it clear that it was by no means accidental that Brussels never announced the full list of conditions for Serbia’s membership in the European Union: “If they did, it would tie the hands of pro-Western Serbian politicians. So they release more and more conditions gradually, one after another. First, it was about recognizing Kosovo – whether this is a condition for EU membership or not. It turned out that it is. Now it is about the recognition of "genocide" in Srebrenica. It is said that Serbia’s entry into NATO will also be a condition for joining the European Union. And, as in the previous cases, we are wondering if such a condition exists or not. As a result, it will turn out that there is. ” [3]

Where Brussels’ pressure on Belgrade is particularly noticeable at present is Serbia’s intention to sign a free trade agreement with the EAEU at the end of October. According to the Minister of Trade of Eurasian Economic Commission (EEC) Veronika Nikishina, negotiations between the EAEU and Serbia on the creation of a free trade zone are over with the parties involved preparing to sign the agreement on October 25. Nikishina says the document will be signed in Moscow by the prime ministers of the five member states of the EAEU, the Prime Minister of Serbia Ana Brnabic and the Chairman of the EEC Board Tigran Sargsyan. Even though Serbia has agreements on a free trade zone with three of the five EAEU members - Russia, Belarus and Kazakhstan, the transition to a common free trade regime has several advantages, emphasizes Veronika Nikishina: “Three bilateral deals that were signed earlier and were not fully identical are being harmonized, giving Armenia and Kyrgyzstan the opportunity of preferences in preferential trade. ”

Also, a trade agreement provides access of the EAEU members to the Serbian market: “For example, it concerns certain kinds of cheeses, some strong alcoholic drinks, and cigarettes from Armenia, Belarus, Kazakhstan and Kyrgyzstan, which could not enter the Serbian market under the free trade regime. And it also spreads on various types of engineering products that have also been removed from bilateral agreements.” “In other words, we give a fully-fledged free trade status to Kyrgyzstan and Armenia and improve the existing bilateral free trade arrangements for Belarus, Kazakhstan and Russia,”  - the Minister for Trade of the EEC emphasizes.

According to Serbian Deputy Prime Minister and Minister of Trade, Tourism and Telecommunications Rasim Lyayic, an agreement with the EAEU may allow the country to increase its export volumes by nearly 1.5 times. According to the minister, in 2018 Serbia’s trade turnover with the EAEU countries amounted to about 3.4 billion dollars, of which 1.1 billion accounted for exports, mainly to Russia. Exports into the EAEU will increase to $ 1.5 billion within a few years after the agreement comes into force, the Serbian Deputy Prime Minister predicts. [4]

Naturally, the EU is more than concerned about Serbia’s trade and economic policy following a different direction. Brussels has already warned the Serbian government that a free trade agreement with the EAEU could harm integration with the EU. “You can’t follow several directions at once,” - said Slovakian Foreign Minister Miroslav Lajcak, thereby warning Belgrade and expressing the position of his counterparts in the European Union: “If you are serious about Europe, you must make decisions that bring you closer to it, but this move is totally out of line. ” [5]

Meanwhile, Serbia maintains composure and has no intention of giving up on the plans. Explaining his country's decision to conclude an agreement with the EAEU, Rasim Lyayic said that it follows economic agenda alone: "It is not about politics, but about trade." [6]

The EAEU is calm about warnings addressed to Serbia, - Veronika Nikishina says: “Until Serbia becomes a full-fledged member of the European Union, it has full autonomy in its trade policy. "In our agreement there are no obligations on the formation of a trade regime between Serbia and the European Union, which is absolutely impossible to imagine." Nikishina made it clear that until Serbia joins the EU, "we are trading with it in a regime we consider appropriate, and we will upgrade this regime." As for Serbia entering the EU (which is a matter of remote future), in this case “all agreements of this kind, including our agreement, naturally, will have to be terminated,” - Veronika Nikishina says. [7]

Nevertheless, there is no doubt that pressure on Belgrade, both in terms of recognizing Kosovo and in connection with relations with Russia and the EAEU, will boost considerably in the coming weeks. In these conditions, the Serbian authorities will obviously have to assume a more determined position with regard to the country’s list of national priorities.