EU - Turkey: friends at a distance 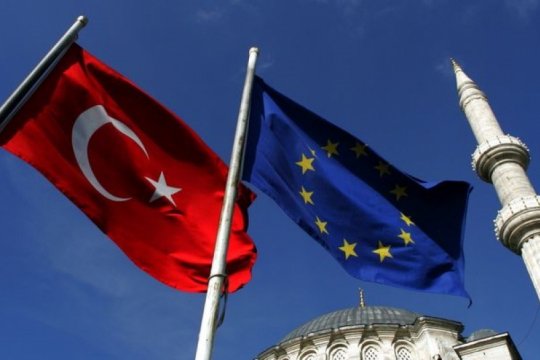 The recent conflict over Turkish drilling vessels exploring for oil in the exclusive economic zone of the Republic of Cyprus has triggered another wave of debates between Turkey and the European Union. For Turkey, membership or non-membership in the EU has long passed the political and economic format, having developed into a nationwide dilemma.

In brief, the story began in 1963, when Turkey, following the commandment of the founder of the Republic of Turkey, Mustafa Kemal Ataturk, wished that Turkey would become part of the “circle of advanced countries”, became a state associated with the forerunner of the EU - the European Economic Community. In 1987, the country officially applied for membership in the EU, in 1999 it was awarded the status of candidate. Six years later, Turkey entered into negotiations  on joining the “united Europe”, which means a discussion got under way on the implementation of standard Copenhagen criteria that determine the readiness of a candidate country to become a full member of the European Union. However, in 2009, after the Republic of Cyprus blocked the discussion of a number of criteria, the negotiation process was stalled. Officially, due to Turkey’s failure to comply with the requirements for EU candidates.

In 2013, the brutal quelling of protests against the ruling regime which broke out in Instanbul and Ankara under environmental slogans provoked harsh criticism from European countries. In response, the then Prime Minister Recep Tayyip Erdogan said that Turkey was no longer concerned about joining the EU. The mass repressions that followed the suppression of the rebellion of the military in 2016 caused a new wave of discontent with the Turkish authorities from the West. According to Erdogan, Turkey no longer needed membership of “united Europe”. In recent years, however, the Turkish leader has been giving it to understand that  enetering the EU is a strategic goal of the country.

The year 2019 marked an expected sensation in relations with the EU: in February, the Foreign Affairs Committee of the European Parliament called for suspending negotiations on Turkey’s membership in the European Union.

A month later, EU Commissioner for Enlargement and Neighborhood Policy Johannes Hahn, while making it clear that for the EU Turkey remained “a highly important strategic partner”, did not fail to remark that “the most honest decision” would be to agree with Ankara to stop the EU membership process. Simultaneously, the European official pledged to act on the Union’s commitments to reimburse Turkey the expenses of accommodating 3.5 million Syrian, Iraqi and Afghan refugees, who stayed on the territory of the country. [i] Ihcidentally, Brussels has so far transferred to Ankara less than half of the six billion dollars it had pledged .

Manfred Weber, who at the time ran for President of the European Commission, called for honesty as well: “What comes first in relations with Turkey is honesty. We favor partnership, friendship, but it is time to stop the membership process. "[ii]"The suspension of negotiations with Turkey is not enough, the process should be stopped completely. Turkey is not Europe for us and will never be.” These words belong to Deputy Prime Minister and Minister of the Interior of Italy Matteo Salvini. [iii]

Despite the conciliatory statements by a number of European politicians, such as the head of the EU delegation in Turkey Christian Berger and the press secretary of the European Commission, Margaritis Shinas, the position that Turkey can not become a member of the EU is attracting more and more supporters.

The line (at least, the temporary one) was drawn by the Expansion Package 2019 prepared by the European Commission and presented on May 29 by EU High Representative for Foreign Affairs and Security Policy Federica Mogherini and European Commissioner for Enlargement and Neighborhood Policy Johannes Hahn. In the part devoted to Turkey, the European Commission, while praising  "productive dialogue and cooperation" in the settlement of the refugee problem and yet again describing Turkey as an "important partner", said: "At the same time, Turkey continues to move away from the European Union in matters of rule of law, respect for fundamental rights, power-sharing." It was concluded that in the present situation it made no sense to continue negotiations on the country's membership in the EU. [iv] Soon afterwards the European Commissioner for Budget, Günther Oettinger, summed up: “Even though we treat Russia, Turkey and the United States differently, they have one thing in common - none of them like the EU, and all of them prefer to deal with individual countries of the community. "[v]

Turkey’s top leadership and the Turkish Foreign Ministry have reacted emotionally, accusing the EU leaders of insincerity and double standards, describing the EU decisions as meaningless, unfounded, unfair and even disgraceful. Erdogan claims that only after Turkey joins the EU will the continent see “peace and stability,” and the EU will become a “global player.” [vi] He  assures European partners that “Turkey will continue to exert efforts to enter the EU in defiance of those that are trying to drive Ankara out of the European family," because, he says, the EU needs Turkey more than Turkey  needs the EU. [vii]

Despite the occasionally sharp rhetoric, Brussels and Ankara continue to pursue a dialogue. As stated by Turkish political analyst Zeynep Alemdar, neither Turkey, nor the EU, nor some individual countries of the Union can afford to break off relations in the economic, energy, security and migration spheres. [viii]

While in the years of the Cold War, Turkey was assigned the role of a country that led in the struggle against the “evil empire”, now, as said by Turkish expert on European affairs Beryl Dedeoglu, it is invited to become a buffer between Europe and countries of the East, which are producing more and more refugees. To this end, writes Dedeoglu, the EU yet again pushes Turkey away in order to accuse it of breaking off from “European values.” [ix]

Generally speaking, it can be stated that for Brussels the best option would be for Turkey to stay a EU-friendly state outside the EU. This is what European politicians speak about quite openly.

As for Turkey, despite repeated statements on the need to join the "European family",  EU membership is hardly in the interests of the country's current political leaders. The European Union hinges on the prevalence of common European interests over national ones, whereas the entire history of Turkey determined the unique place of nationalism in public consciousness. In Turkish society, “decisive opposition” with Europe and more broadly, with the West, adds to the popularity of the Turkish authorities. The country's leaders themselves understand the futility of the negotiation process: “The only reason why Turkey has been denied membeship in the EU is that we are a Muslim country,” - said Recep Tayyip Erdogan last February as he appeared on the TV channel A Haber. [x] According to this logic, there is no way Turkey could become member of the European Union, since it will not become a Christian country in the foreseeable future.

Meanwhile, given that the EU accounts for about half of Turkish exports and for about a third of imports, Ankara cannot afford to “break relations with Europe”, even if it wanted to. But it clearly does not want to: alliance with the West (take NATO membership!) strengthen Turkey’s positions in the dialogue with Russia and countries of the East. Just as partnership with Moscow enables it to assume a more independent approach in relations with Brussels and Washington.

So far, Ankara has succeeded in maneuvering between these two poles of power. However, it is becoming increasingly difficult for it to continue to do so.