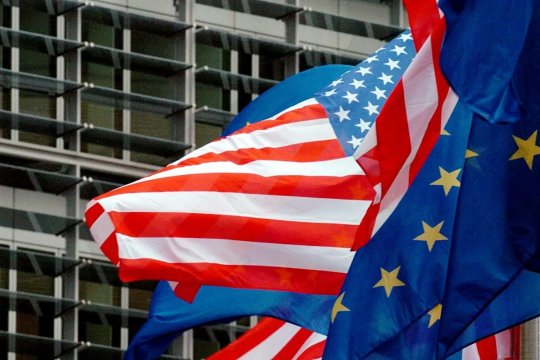 The article analyzes new trends in the development of the transatlantic partnership, laying bare the contradictions and problems that have recently been complicating the allied ties between the US and the EU.

Donald Trump's presidency has led to a noticeable cooling of relations between the United States and the European Union. Most European analysts view the Trump administration’s approach to relations with the European Union as destructive, since it proceeds from the assumption that European integration is directed against the United States and that the "disunited states of Europe" thus pursue their own strategic interests. This means that the US now prefers to build privileged bilateral relations with individual countries, depending on their geopolitical and regional status and foreign policy priorities, which is clearly reflected by Washington’s support for Brexit.

Signs of an unprecedented complication of transatlantic ties abound, as was clearly confirmed by the June 20, 2020 videoconference by the foreign ministers of 27 EU member states, attended by US Secretary of State Mike Pompeo, and which the authoritative French newspaper Le Monde very aptly described as a “dialogue of the deaf.” [5]

The United States’ approach to tackling the COVID-19 pandemic differs notably from the EU’s. While the European Union believes that the vaccine, which is currently being developed in various countries, should belong to all mankind, Washington wants to have exclusive access to it with an eye to monopolizing its use in the world. Trump has tried to persuade the German firm CureVac, developing a vaccine for coronavirus, to move its research work to the United States, and ignored a call from various international organizations to reconsider the US decision to break off relations with WHO, and a joint appeal to this effect from European Commission President Ursula von der Leyen and the EU’s High Representative for Foreign Affairs and Security Policy Josep Borrell.

The Protecting Europe's Energy Security Act of 2019, introduced by a group of US Senators, provides for harsh sanctions against anyone involved in the construction of the Nord Stream 2 gas pipeline. The bill expands existing US sanctions related to the provision of pipe-laying vessels and applies to all companies involved in the pipeline’s construction, operation and maintenance.

If enacted, the bill will affect more than 120 companies from 12 European countries, since seaports, legal and insurance companies will suffer too. It also stipulates that if the construction of the pipeline is completed, sanctions will be applied also to specialized organizations that certify it.

The EU’s reaction came quickly. In her July 1, 2020 address to the Bundestag, German Chancellor Angela Merkel minced no words openly describing Washington’s extraterritorial sanctions against Nord Stream 2 as illegal. Her statement was all the more significant since it coincided with the start of Germany’s presidency of the EU Council for the next six months. Commenting on the country’s foreign policy priorities for this period in light of the US pressure on the EU, Foreign Minister Heiko Maas laid out the EU's sovereign strategic and tactical position: “We do not intend to be guided by anyone; we want to go our own way and actively influence geopolitical agenda.” [2]

The German MPs were much less diplomatic though.

“We are convinced that the time of diplomatic restraint is now over. To protect European interests, the German government and the European Union should introduce countermeasures and consider the use of retaliatory sanctions, for example, against US shale gas. The real threat of serious retaliatory sanctions is the only way we can possibly resolve the conflict. This is the only language Donald Trump understands,” Timon Gremmels (SPD faction’s speaker on gas policy) and Markus Töns (SPD faction’s speaker on trade policy) stated. [4]

The lack of unanimity of positions on Iran has become a serious sticking point in EU-US relations. France, Germany and even Washington’s closest ally Britain have criticized the new American sanctions against the Islamic Republic, demonstrating their opposition to the US intention to nix the landmark nuclear deal with Tehran, reached in 2015.

Disagreements within the US-EU-NATO geopolitical triangle have escalated sharply, with French President Emmanuel Macron publicly describing NATO, where the US plays a leading role, as being “brain dead.” After his oft-repeated demands for Germany to almost double its financial contribution to NATO were essentially ignored by Berlin, Trump decided to cut the US military contingent in Germany by 9,500 troops on the pretext that the US was overburdened with ensuring Germany's security.

For all his unpredictability, Donald Trump is pretty much consistent when it comes to his stance concerning the transatlantic military-political partnership. Attentive observers will recall that when speaking in the press about his support for one of the candidates for the US presidency three decades ago, Trump said he was unhappy about American resources going to protect rich allies that did not invest enough in their own defense and essentially benefited at Washington’s expense. Therefore, he insisted that United States should stop paying for a world order that primarily accommodates the needs of other countries, even if they happen to be America’s allies.

After the Polish government said it would welcome a full-fledged US military base on its territory, manned by the US troops being withdrawn from Germany, Trump invited Polish President Andrzej Duda to visit the United States just a few days ahead of this year’s presidential elections in Poland.  The US meddling in the 2020 summer election campaign in an EU country was as obvious as it was unceremonious. Moreover, it sent a clear message to Angela Merkel as a reminder of her refusal to come to Washington for the G7 summit in June.

In a research project “State of the World 2020. The End of American Leadership?" a team of French political scientists expressed their conviction that “militarily, the EU must get rid of the illusion of a protective American umbrella by providing its own collective defense. America’s strategic distance (from Europe – M.N.) fits into the long-term perspective. Consequently, dependence on NATO can threaten security on the continent.”  [3, p.181]

The foresight of Cyril N. Parkinson, the author of the famous "Parkinson's Laws," who, decades ago, predicted a crisis in relations between the United States and Europe, has proved surprisingly accurate. In comments to his “Laws…” Parkinson explained that if the West wants to survive, it must achieve a certain unity and rally its ranks, which is not even mentioned now. If links begin to fall out of this goal, it will not happen in a border state, where tension always persists, not in countries that desperately cling to their elusive sovereign status - a breakdown will occur where there is seemingly complete grace: in Brussels or Washington "[1, c.318]

However, speaking about the end of the transatlantic partnership would be a far-fetched exaggeration. Today, the time-tested allied relationship between the EU and the US, based on fully or partially shared values as well as ideological, political and economic priorities, is being tested by serious international challenges and threats and, simultaneously, by initiatives coming from the Trump administration that are particularly painful for the EU. Even though the interests of the parties diverge and the format of their relations is changing or being modified, in the present geopolitical context this is unlikely to erode the bonds of transatlantic partnership, much less to precipitate any major crisis. Meanwhile, amid a protracted crisis of the liberal model of the world order, the competitive partnership between the US and the EU will keep hitting snags, but this will still not become a mainstream antagonistic trend in their relations.