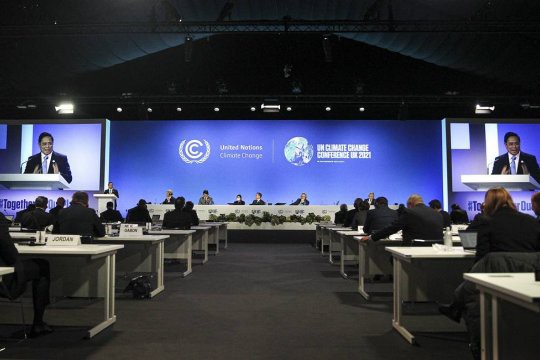 In the course of the 26th United Nations Framework Convention on Climate Change (Conference of the Parties, COP26), the United States and the European Union demonstrated a seemingly shared view on the “green” transition policy. Nevertheless, the two members of the Atlantic community have substantial differences over measures to overcome the negative effects of climate change.

The current, “green”, transformation of the energy and technology practices of the humanity promises as massive geopolitical upheavals as before. As we remember, "the coal revolution” secured the British Empire a leading role in global affairs, while “the oil revolution” enabled the United States to oust Britain from the position of a global hegemon.

Although the United States and Europe have been doing their utmost to maintain their domineering role in global finance and economy, the west-oriented globalization model is experiencing an ever increasing imbalance. Therefore, the US and EU international policy has come to center on the “climatic threat”. Biden has declared climate change one of the main threats to the US national security. Many, but not all, members of the European Union welcome such a policy.

The United States and Europe demonstrate a particular unanimity of approach when it comes to claims to third countries, which are required to assume commitments on an early reduction of emissions and decarbonization of their industries, first of all, the coal industry, and the oil and gas industry. Given that China and India are number one “coal” pollutants, western reports say, Washington and Brussels have joined effort to accuse China of “outsourcing carbon emissions”.

During the COP26 summit, the United States and the EU also formed a tandem to support The Global Methane Pledge, a draft agreement on the reduction of methane emissions. The emission of methane, a substance far more harmful in terms of its impact on global warming than carbon dioxide, is to be cut by 30% to the level of 2020 by the end of this decade. Accusations in connections with this have thus been thrown not only at China, but Russia and other oil and gas suppliers.

A third direction of the “green” policy where the positions of the Americans and most Europeans, particularly officials in Brussels, coincide, is the demand that a large-scale economic development of the Arctic should be prevented at all costs. The request is nothing new. The European, along with the United States, form a united front against the lawful position of Russia, which considers the Arctic Sea Route a national transport artery. In the recently publicized Arctic Strategy Brussels supports Biden’s election campaign slogans in which he calls for a complete ban on the industrial development of mineral resources of the Arctic.

Finally, the West’s decarbonization strategy presupposes measures to secure higher prices for conventional sources of energy. As a result, the US and Europe are set on raising oil and gas prices so high as to encourage the development of renewable sources of energy and energy-saving technologies and prevent the strengthening of top fuel suppliers amid “temporarily high prices”.

Meanwhile, the “green” transition, which will cost about 100-150 trillion dollars “over the next 30 years” [i], means a dramatic restructuring of the global economy. As history shows, competition between key centers of power in transition periods aggravated, rather than eased. Today, each country or a group of countries is supposed to elaborate and put into effect a climate policy which would reinforce their own positions, in the first place.

The Euro-Atlantic region is no exception. A whole number of potential division lines in relations between America and Europe could come to the surface. For one, the carbon tax on imports that the EU is planning to impose will hit US suppliers too. No wonder then that Biden, despite his rhetoric on the revival of bilateral relations, is against the EU’s carbon tax in its present shape. As for the Republicans, they won’t even hear of it. According to realistic-thinking experts, for now, there is a clash  of two points of view in the US: supporters of “cosmetic” measures in decarbonization, and those who “don’t believe in climate change, such as Bush, and Trump”.

At the end of October, the US Supreme Court accepted a case which could radically restrict the power of federal authorities regulating power plant emissions. 20 states, and also groups of industrialists, are appealing against a lower court ruling which would empower the Federal Environment Protection Agency to impose restrictions on carbon dioxide emissions by coal-using power plants. In 2016, the Supreme Court overruled the Clean Power Plan, proposed by President Obama.

As also became clear these days, the Biden administration, even though succeeding in getting the party supporters in the Congress to back a bill on the new 555-billion-dollar climate change policy, the White House had to sacrifice a number of key provisions on speeding up the development of “green” energy generation technology. «…Europe will thus be unable to promote its ideas too far. Its projects will either transform into an overt means of political pressure, or Europeans will have to assume a tough policy regarding the United States, which could trigger yet more tension in the western world».[ii]

Brussels understands that the «green» energy policy provides the European Union with a chance to foster its strategic positions in a dialogue with the US. This is because unlike the military and strategic ones, Europe’s economic and technological potential is comparable to the American one. In the summer of 2020, the EU published the Hydrogen Strategy, aimed at replacing the traditional sources of energy with energy generating facilities on the basis of hydrogen. One of the goals openly declared by Europeans is to “create a global hydrogen market on the basis of the euro”.

Indeed, the European Union has been complaining about the need to use the dollar for the purchase of energy carriers. Moreover, some claim that after abandoning the Gold Standard, America made it a point to turn the global oil market into a spot one where prices are formed in the course of stock trading. Such a transformation made it possible to strengthen the dollar as a major global reserve currency. Since the 2000s Washington has been trying to push for a similar policy on the global gas market. So, European companies are feeling it ever more important to protect their interests from extra-territorial sanctions imposed by the USA.

Technologically speaking, there are no pure hydrogen reserves anywhere on Earth, so the production of this promising source of energy is "a relatively costly, resource-intensive and, in most cases, extremely dirty process”. The five hydrogen production technologies range from the “black” – the most harmful to the environment, to the “green” – the cleanest. Two technologies, which the dirty ones compared to the “green”, are the “grey” and the “blue”, which rely on the use of a fossil fuel – natural gas, Irina Kezik says on Vedomosti. Meanwhile, one of the main points on the agenda of the “green” energy plan is who will pay for it? The United States has far more natural gas than Europe. Over the past ten years Britain and the EU have spent “trillions of dollars” subsidizing the development of renewable sources of energy, the share of which has increased dozens of percentage points. However, the weather abnormalities of last summer forced the EU to urgently reset the gas and coal generation. A surge in demand for gas in Europe has stimulated LNG export from the USA, while prices have risen dramatically throughout the entire global LNG market. As a result, the American gas first went to Asia, where prices have always been higher than in Europe.

As it happens, Europe’s years-long efforts and huge investments in renewable sources of energy have made it vulnerable and yielded profit to though “friendly” but still foreign suppliers of conventional fuel. Ultimately, methane that American gas suppliers carry into Europe may reduce to zero the EU’s emission reduction efforts as, according to International Energy Agency estimates[iii], the US oil and gas industry occupied number two position in 2020 on the emissions of methane – a gas that produces the most harmful effect on global warming.

Thus, the parties concerned will likely discuss measures to ensure the “purity” of various hydrogen production methods and develop national hydrogen production technologies. Here, we need to recall that what made the first “volleys” in Trump’s trade war against China in January 2018 was import tariffs on solar battery panels. Will the two coasts of the Atlantic manage to agree on the rules of the game after reducing imports from China “for strategic considerations”? The history of numerous trade wars between the US and the EU puts into question their cloudless relations in such a significant from all points of view area as the formation of a new energy policy for decades ahaead.

Realism tells us that appealing to a noble motive – to prevent a catastrophic rise in global temperatures, provides, along with other things, a brilliant opportunity to pursue that very protectionist policy that was characteristic of Trump’s presidency, even though less overt but more covert – through establishing requirements to the imports, which should meet the high “green” standards. Both the USA and the EU are exceptionally skillful at protecting the domestic market in such a manner.

In many cases, the new “green” technologies increase production costs. It’s one thing if the EU and the US jointly push for new “eco-safe” standards, and it’s another  thing if Europeans shell out for decarbonization in full whereas the Americans choose not to hurry.

The stakes for the European Union are extremely high: after succumbing to US pressure, it risks irreversibly losing the status of one of the world’s top – range economic hubs. Success of protectionism and sanction pressure policy will undoubtedly inspire Washington. So what shall American companies’ competitors do then? «Leave the stage at first demand from overseas?» The USA has competitors “everywhere”. A variety of industries would have to ““cut back” to please the American economy».[iv] Endless concessions will entail new demands.

Ultimately, the narrative of a struggle against :climate pollutants” may easily be applied to countries which are formally part of the western camp. For example,  the European Commission leadership supports Biden on a complete ban on the development of natural resources in the Arctic. However, such a ban deals a direct blow on the interests of such EU members as Denmark, Finland and Sweden. In a recent article by Stuart Patrick published in Foreign Affairs the author calls for restricting the national sovereignty of states “in the name of “global climate order””, Russian expert Boris Mezhuev remarks. The principle “duty to protect” could thus be used to counteract the “sovereignist regimes that find it unnecessary to observe any commitments in relation to their natural resources”.

The pace of the development of renewable energy technologies and the financial and economic prerequisites for their introduction and functioning is number one uncertainty factor when it comes to the rate and scale of the “green” energy transition. No one can say for sure how long the period of subsidizing the  transition to the “green” sources of energy will last. Will America and Europe succeed in coordinating their “green transition” interests in situations when good intentions prove powerless before the laws of nature and before the economic law of demand and supply?