Eurasian integration: from economics to creation of a center of power 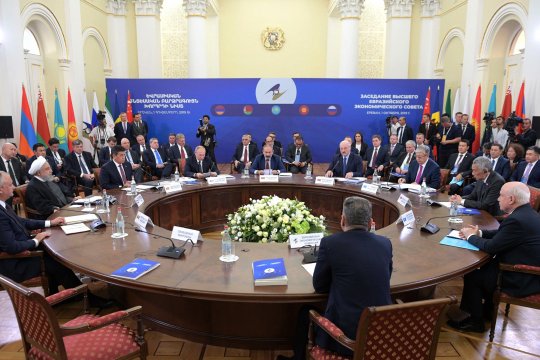 Russia’s President Vladimir Putin had every reason to congratulate his Armenian colleague Nikol Pashinyan with the outcome of the summit of Eurasian Economic Union (EAEU) leaders that was recently held in Yerevan, where many promising decisions were made, bringing Iran, Singapore and Uzbekistan closer to this international organization.
Creation of various economic associations amid the ongoing process of globalization and toughening competition is a global trend nowadays. And still, the reasons for this process in Eurasia are as much economic, as they are existential.

The “traitorous” decision by the Western Christian powers during the Crimean War to side with the Ottoman Empire, which was widely perceived as a force hostile to the Christian world, came as a shock for Russian society, and above all, for the elite of the Russian Empire, which, throughout the 18th and 19th centuries, had been working hard to expand "the window on Europe," opened by Peter the Great. The Europeans’ deep-seated rejection of Russia as part of the European world, often spilled out into open hostility.

The Crimean War underscored Christendom’s split along ideological and political lines, which began with the separation of the Roman Catholic and Orthodox Churches in 1054. The rapprochement between Russia and the European powers during and immediately after the Napoleonic wars proved a rather short-lived (and atypical) episode in the history of East-West relations. Before very long, however, Russian society managed to develop an "antidote" that cured the psychological trauma caused by the war: "Russia has only two allies: its army and Navy," as Emperor Alexander III famously said. Moreover, the complex of “otherness” vis-a-vis Europe quickly turned into a matter of pride for many Russian thinkers, such as Nikolai Danilevsky ("Russia and Europe"), Leo Tolstoy ("War and Peace"), Alexander Blok ("Scythians"), to name just a few.

While Danilevsky presented Russia as the leader of the still emerging Slavic "cultural-historical type," the classical “Eurasians” with their idea of "Russia-Eurasia" believed that the cultural code of the Russian people is closer to the Turkic than to the West-Slavic one. What the “Eurasians” failed to delve into, however, was religious difference between the Russian and Turkic peoples, most of the latter being Muslims.

The ambitious experiment of building communism on a planetary scale further alienated Russia from the West, but brought it closer to the countries of the "third world,” primarily those in Asia. During the 1990s, Russia once again reached out to the West, only to be cold-shouldered by it.

This is exactly the response the West gave Turkey at the turn of this century and, just like the Russians before them, the Turks transformed their own complex of rejection from the West into a matter of pride. Today, according to various polls, up to 94.5 percent of Turks view the United States a hostile country. Anti-Americanism (coupled with anti-Western sentiment) is similarly on the rise in much of the Eurasian continent - from China all the way to the Middle East.

Meanwhile, the “Eurasians” theorized about a fundamental idea the entire future of “Russia-Eurasia” was to be built on. Today, most of the Eurasian countries’ foreign policy paradigm is overshadowed by their postcolonial syndrome and their desire for a more equitable world economic order.

"The recurrence of arrogant neo-colonial approaches, where some countries have the right to impose their will on others, is rejected by an absolute majority of members of the world community," who seek “a more meaningful role in taking key decisions," Russian Foreign Minister Sergei Lavrov wrote in an article titled “The world at a crossroads, and the system of international relations of the future."[i]

This goal can only be achieved by joint efforts and closer integration in the Eurasian space, where complex supranational integration formats, such as ASEAN, SCO, the Customs Union and the Common economic space (Russia, Belarus, Armenia, Kyrgyzstan and Kazakhstan) are already being established. Despite the complexity of the search for a mutually acceptable combination of the interests of very dissimilar countries (unlike in the case of the European Union), which have different civilizational affiliations and some even have running conflicts, this process is still moving ahead.

And yet, despite all their specific features, these countries still have very much in common: as a rule, a powerful state ("public") economic sector, a long tradition of statehood (unlike Europe, not necessarily national) and, as a consequence, a traditional view of state power as something bordering on sacrosanct. And also an inherent rejection of the Western worldview with its mass culture, "rational," almost materialistic, religion, and the substitution of morality by the criminal code, as the harshest critics of the West claim. Comparing Russia and Europe, the Russian historian Mstislav Shakhmatov stated: "The state of truth and the state of law are two different worldviews: the former is characterized by religious pathos and the latter - by material aspirations (...). [ii] Almost a century later, this maxim still rings true with many Eurasian societies.

Integration in our pragmatic century should start with a search for shared economic interests (by the way, the European Union grew out of the European coal and steel association). Speaking at the 2016 international economic forum in St. Petersburg, President Vladimir Putin pitched the idea of creating a large Eurasian partnership which, besides the CIS countries, would also bring on board China, India, Pakistan, Iran, and other countries.

Russia, which is a melting pot of a plethora of ethnic groups and cultures, has every reason to claim the role of a "natural" driving force behind the process of Eurasian integration. According to Turkish political analyst Ferhan Bayir, today "even the ruling Justice and Development Party in Turkey, which is rooted in political Islam, is edging closer to Russia as it increasingly opposes the United States... Even more so Iran, which is not just getting closer to Russia, but is actually working together with it in many parts of the region." [iii]

Europe became a self-sufficient (though flagging) power center even before it united politically, and Eurasia may well become another such center. Since political unity, including in future, is unlikely, the participants of this integration process could still learn how best to respond together to external challenges, just like Russia, Turkey and Iran managed to collaborate in the Syrian conflict.

It would certainly be great if all countries of the continent (like just anyone else too) could learn to be friends and work together, but awareness of common interests (and, in the era of globalization, of destinies too), can hardly extend to all of Eurasia. Therefore, when we talk about the hypothetical Eurasian community as a center of power, we would have to exclude China, which itself is a power center and the core of a separate civilization. As for India, it will hardly show much interest in close integration as Hindustani civilization is a vivid example of an introverted and self-contained one.

Putting aside the term "center of power," creating a community of countries with shared economic interests in Eurasia is quite possible. This project will not be hampered by any political incumbrancers, if only its participants agree to find compromises as they go. It won’t be easy, but, as they say, a journey of a thousand miles begins with a single step…