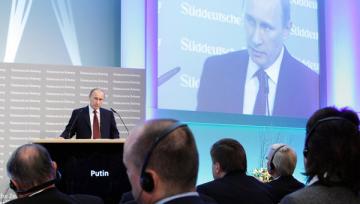 One might be tempted to regard Russian premier V. Putin's paper “A new integration project for Eurasia: The future in the making”, which saw the light of day in Izvestia on October 3, 2011, as the presidential front-runner's sketchily laid out program, but upon scrutiny that appears to be only one part of a wider picture. The opinion piece momentarily ignited wide-scale controversy in and outside of Russia and highlighted the ongoing clash of positions on global development.

Regardless of interpretation details, the reaction of the Western media to the integration project unveiled by the Russian premier was uniformly negative and reflected with utmost clarity an a priori hostility towards Russia and any initiatives it floats. Mao Zedong, though, used to say that facing pressure from your enemies is better than being in such a condition that they do not bother to keep you under pressure.

It helps to understand why, at the moment, Cold War-style headlines are constantly popping up in Western media and what perceived threat the West discerned in Putin's recent Eurasian integration. The obvious explanation is that, if implemented, the plan would come as a geopolitical challenge to the new world order, to the dominance of NATO, the IMF, the EU and other supranational bodies, and to the undisguised US primacy. Today's increasingly assertive Russia suggests and is ready to start building an inclusive alliance based on principles providing a viable alternative to Atlantism and neoliberalism. It is an open secret that these days the West is putting into practice an array of far-reaching geopolitical projects, reconfiguring Europe in the wake of the Balkan conflicts and against the backdrop of the crises provoked in Greece and Cyprus, assembling the Greater Middle East based on serial regime changes across the Arab world, and, as a relatively novel design, implementing the Asia project in which the recent disaster in Japan was an active phase.

In 2011, the intensity of geopolitical dynamics was unprecedented since the collapse of the USSR and the Eastern Bloc, with all major countries and international bodies contributing. Moreover, the current impression is that military might somehow became a legitimate instrument in international politics. Just days ago, Moscow drew avalanche criticism after vetoing the UN Security Council resolution which could authorize a replay of the Libyan scenario in Syria. As  a result, US permanent envoy to the UN S. Rice slammed Russia and China over the veto, while French foreign minister Alain Juppé declared that “it is a sad day for the Syrian people. It is a sad day for the Security Council”. During the heated UN security Council debates on September 5, Syrian representative lambasted Germany and France, and charged the US with perpetrating genocide in the Middle East. After that, S. Rice accused Russia and China of hoping to sell arms to the Syrian regime instead of standing by the Syrian people and stormed out of the meeting, and French envoy Gérard Araud opined that “No veto can clear of their responsibility these Syrian authorities that have lost any legitimacy by murdering its own people”, leaving an impression that murdering people, as in Yugoslavia, Afghanistan, Iraq, and Libya, should be a NATO privilege.

Moscow's Western “partners” are outraged whenever Russia, in concert with China, puts obstacles in the way of the new world order. Syria, albeit a regionally important country, only fleetingly tops the agenda, but Putin's ambitious plan for the whole Eurasia - “reaching a higher level of integration – a Eurasian Union” - had to be expected to evoke deep and lasting concerns in the West. Moscow openly challenges the West's global dominance by “suggesting a model of a powerful supranational union that can become one of the poles of today's world while being an efficient connecting link between Europe and the dynamic Asia-Pacific Region”. No doubt, Putin's messages that “the combination of natural resources, capital, and strong human potential will make the Eurasian Union competitive in the industrial and technological race and the race for investor money, new jobs, and advanced production facilities” and that “along with other key players and regional institutions such as the EU, the USA, China, and APEC, it will ensure the sustainability of global development” sounded alarming to Western leaders.

Neither the collapse of the USSR and the bipolar world nor the subsequent proliferation of pro-Western “democracies” marked a final point in the struggle over global primacy. What followed was an era of military interventions and displacements of defiant regimes with the help of information warfare and the omnipresent Western soft power. In this game, Eurasia remains the main prize in line with John Mackinder's geopolitical imperative by which “Who rules East Europe commands the Heartland; who rules the Heartland commands the World-Island; who rules the World-Island controls the world”.

In the late XX century the US became the first-ever non-Eurasian country to combine the roles of the world's top power and the final arbiter in Eurasian affairs. In the framework of the new world order doctrine, the US and the West as a whole see Eurasia as a zone of key importance to their economic development and growing political might. Global dominance is an openly stated and constantly pursued goal of the Euro-Atlantic community and its military and financial institutions – NATO, the IMF, and the World Bank - along with the Western media and countless NGOs. In the process, the Western establishment remains fully aware that, in Z. Brzeziński's words, „America's global primacy is directly dependent on how long and how effectively its preponderance on the Eurasian continent is sustained”. Sustaining the “preponderance”, in turn, takes control over Europe, Russia, China, the Middle East, and Central Asia.

Untamed Western hegemony in Europe, Central Asia, and, to an extent, in the Middle East and even Russia used to count as an unquestionable outcome of the past couple of decades, but at the moment the situation appears fluid. Western, Chinese, and Russian watchers alike are predicting an imminent failure of the neoliberal globalization model embedded in the new world order, and the time is coming for the political class to adopt the view.

By opening up opportunities to shield original models of national development from Atlantist pressure and to maintain real international security, Putin's new integration project holds a major promise for Russia and its allies, and thereby presents Russia's foes with a serious problem. Neither Russia nor any other post-Soviet republic can survive in today's world single-handedly, and Russia as Eurasia's key geopolitical player with economic, political, and military potentials unparalleled across the post-Soviet space can and should stake a bid for an alternative global architecture.

The West's allergy to Putin's plan is therefore explainable, but, regardless of the opposition the project is bound to run into, of the weakness of some of its elements, and of the potential difficulty of putting it into practice, the Eurasian integration project grew out of the life of the post-Soviet geopolitical and cultural space and is consonant with current global trends. Surviving, preserving the economic and material foundations of national existence, keeping traditions alive, and building a secure future for the children are the objectives the Eurasian nations can accomplish only if they stay aligned with Russia. Otherwise, isolation, sanctions, and military interventions awaits them.