Europe: Change of Ruling Elites on the Horizon 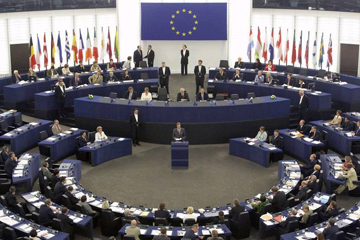 As the tide of the Occupy Wall Street demonstrations sweeps across European cities, the impression is growing that the future holds a lot of unexpected for the EU. The protests which are carefully coordinated via social media can't but evoke memories of the recent uprisings in North Africa and the Middle East, especially since the coordinators readily cite parallels between the gatherings in Tahrir Square and Times Square. However, much more is at stake in Europe than elsewhere considering that the rotation of the European ruling elites made imminent by the economic crisis can translate into profound political transformations in the entire West.

On October 23, Switzerland will hold watershed elections, which are expected to turn into a triumph for the far-right Swiss People's Party. Its projected score – over 30% - is unprecedented for the European right, and Swiss watchers stress that the strong show may destroy the long-standing and essentially consensus-based balance of power among Switzerland's leading political forces. At the moment surveys give the Swiss socialists under 20% of the vote, enabling Swiss People's Party chair Toni Brunner to generously offer putting together a coalition government. The surging popularity of the far-right in Switzerland mirrors wider European trends, and the agenda spelled out by the Swiss People's Party including staples like the ban on mosque construction, automatic deportation of immigrants with criminal records, and calls for stronger Swiss identity represents the Europeans' natural response to the mounting problems confronting them. As of today, immigrants account for 22.9% of the population of Switzerland, and the key demand pressed by Brunner and his supporters is that Geneva should subject to an immediate revision its free travel agreement with the EU and otherwise cap immigration. The Swiss People's Party plans to get Switzerland to hold a nationwide referendum on immigration which it hopes will reinforce arguments in favor of a drastic anti-immigration reform.

The EU went a long and difficult way to pen the Lisbon Treaty but the anticipated benefits such as confident economic growth, financial stability, or at least common European defense and foreign-policy space failed to materialize before the economic crisis started raging in Europe and the battles over democracy for Muslims in its proximity sent flows of refugees to the EU. As a result, the feasibility of the European unification project is being increasingly called into question, one of the consequences being that prospects appear dire for those of the European elites which staked their political careers on Eurointegration.

The defeat of A. Merkel's Christian Democratic Union in the March elections in the German state of Baden-Württemberg, where the CDU stayed at the helm for 58 years, and the success of the green opposition could be interpreted as an early warning that serious changes were brewing in Europe. In November, the financially embarrassed Spain will hold snap elections which, in the wake of the recent mass strikes, can easily propel opposition to power in the country. The May local and regional elections in Spain already left the ruling socialists largely unseated. The government overhaul is an accomplished fact in Slovakia, the last of the EU countries to OK the bail-out plan known as the enhanced European Stability Facility.

Europe will face an electoral crash test in 2012-2013 when elections will be held in France, Germany, and Italy. In all cases, the opposition parties will build their campaigns around a predictable set of themes including the old elites' inability to foresee the crisis or take timely measures to handle it, the collapse of multiculturalism and the erosion of the European identity, and, on top of the above, the lack of a coherent policy in dealing with Europe's neighbors from Libya and the Balkans to Russia and Ukraine. The problems could perhaps be tolerated if taken separately but bundled they add up to a serious case for a political facelift in Europe.

In the late 1990ies, Z. Brzezinski wrote that upon absorbing most of East and Central Europe the formally integrated EU may inadvertently  evolve into a conglomerate of quarreling nation-states. Judging by the bitter disputes between Paris and Rome over North African refugees or the angry exchanges between Hungary, Slovakia, and Romania whose grievances are evidently rooted in history and involve distinctly nationalist components, Brzezinski's forecast should be credited with perfect accuracy. Interestingly, these days conflicts of comparable intensity – involving the more active of the population strata and incited via the pervasive social media – are playing out within individual countries. Alarming tendencies like pitiable voter turnout, untamed radicalism, and Euro-skeptics' outstanding gains surfaced in 2009 during the European parliament elections. The subsequent national elections, especially in Scandinavian countries, underscored the rise of radicalism in Europe.

Not long ago the financial system of Europe which barely recovered from widespread and ocasionally violent protests suffered a new shock. Oddly  enough, this time rating agencies were not the trouble-makers: the shock was induced by A. Merkel's statement made ahead of the October 23 EU bail-out summit. In a clear attempt to cool hightened expectations of potential aid recipients, Merkel refered to them as dreams that may never come true. A major market slide – beginning in Asia, then spreading to Europe – followed shortly.

Merkel says the search for solutions to the crisis problem will continue into the next year, but chances are that by the time the mission will be taken over by new governments not burdened with the obligations to which their predecessors used to subscribe.