Europe: from mistrust to mutual understanding 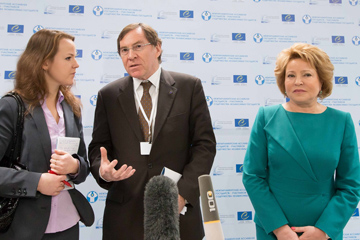 An international conference on "The role of parliamentary institutions in building a Europe without dividing lines" was held in St. Petersburg by the Inter-parliamentary Assembly of Member Nations of the Commonwealth of Independent States (IPA CIS), and the Parliamentary Assembly of the Council of Europe (PACE). This year, the PACE and the IPA CIS mark the 15th anniversary of the signing of the Agreement on Cooperation.

"The fact that this conference is conducted by the two major parliamentary organizations of our continent, inspires optimism and confidence that eventually we will be able to overcome the existing barriers and create a common legal and humanitarian space in Europe,"  stated the Chairman of the IPA CIS V.I . Matviyenko, at the opening ceremony.

"We attach great importance to the cooperation with the Council of Europe as part of its parliamentary dimension, PACE, which is the oldest parliamentary institution on the continent,” continued V.I. Matviyenko. “In general, our cooperation is productive. But one has to admit that not everything is going smoothly ... Unfortunately, the dividing lines in Europe still remain today. And they exist, above all, in the minds of some European parliamentarians and politicians. The stereotypes of the Cold War show remarkable vitality, and are expressed in the demonizing of partners and the finding of geopolitical enemies in the east of the continent.”

“I believe that it is time for all of us together to begin the formation of a positive agenda that does not divide, but unite the efforts of parliamentarians working together against the destructive logic of the division of Europe on the basis of old and new democracies, on "teachers" and "students."

“We urge the consolidation of our efforts to find answers to challenges and threats common to all Europeans. Among them are: terrorism, uncontrolled migration, drug trafficking, extremism, nationalism and neo-Nazism, "non-citizenship", intolerance and discrimination based on ethnic, religious, cultural and other characteristics," the Chairman of the IPA CIS V.I. Matviyenko appealed to the conference.

In response, the PACE President Jean-Claude Mignon, cited the PACE and the IPA CIS as an example of a long term serious partnership. Conducting such meetings and discussions, in his opinion, makes this cooperation more and more effective. "We must do everything possible to achieve a Europe in which we can believe. Our main goal is to build a common space of cooperation without dividing lines, from the Atlantic to the Pacific," said Jean-Claude Mignon.

Solving such a massive task can only be achieved by moving toward each other and reinforcing our intentions with concrete actions. This idea was developed by the Chairman of the Verkhovna Rada (parliament) of the Ukraine V.V.Rybak: "The Ukraine is considering the integration with European structures and cooperation within the framework of the CIS, as two complementary processes. We must admit that despite the obvious achievements of European integration, its fruits have not yet become a more common heritage. Of the four freedoms on which the European Union is based on a continental scale, the most important privilege for Europeans remains unrealized: the freedom of movement of people without visas and other restrictions. Without this, the construction of a united Europe will remain merely a good intention. That is why, perhaps, we should together, with the participation of the Parliamentary Assembly of the Council of Europe, the European Parliament, the Parliamentary Assembly of the States, and members of the CIS, as well as the national parliaments of European countries consider the development of a "Charter for a visa-free Europe." The construction of a united Europe without dividing lines will facilitate and implement the principles of economic cooperation on the continent. The Ukraine is interested to enter into a free trade zone with the European Union and at the same time, in the eastern direction, to reduce custom barriers and barriers to trade and economic cooperation with the countries of the Customs Union," said V.V.Rybak.

The theme on the abolition of visas was also supported by the Deputy Chairman of the House of Representatives of the National Assembly of the Republic of Belarus, VA Guminsky, who said that the visa regime was a relic of the Cold War. "All of us are members of the European family. We are however different, and this is our strength. "

This argument did not give rise to objections on the part of the PACE delegation, indeed, it became a cause for the discussion on the topic of human rights and the norms of pluralist democracy in the former Soviet Union. Counter arguments and specific examples, including the question of "non- citizenship" of the Russian-speaking population in Latvia and Estonia were presented, in turn, to the representatives of the European Union. As a result, the inter-parliamentary debate on this topic continued in an atmosphere of mutual trust.

A member of the Committee of the Parliamentary Assembly of the Council of Europe on Political Affairs and Democracy, Andreas Gross, shared his thoughts on the subject: "Trust is the key word. In politics, we often use phrases such as "confidence-building". The countries of the CIS have a heritage from the past: totalitarianism. There is a popular saying in Russia: "Trust, but verify" ... So beforehand you need to cultivate the confidence to overcome mistrust. It takes time. And this time, one needs to use correctly. That's why we have to be able to speak about and listen to other opinions ourselves. We are ready to share a common experience. Words are not enough, an overall positive experience is the best soil for the cultivation of trust. Parliamentarians should establish good communication links not only between themselves but also between the citizens of their countries, as they are the "small bridges," the conduit between institutional organizations and citizens. Sometimes within the Council of Europe, we feel that distrust is a major problem. It really is the core of all the other problems. Let us work together to make efforts to achieve a 180 degree change in this issue," concluded Andreas Gross.

Continuing the theme of trust, the first deputy chairman of the Foreign Affairs Committee of the Federation Council of the Russian Federation, V.M.Dzhabarov, was more specific: "The development of events in the world shows that we are at a critical and crucial stage of the transformation of the entire system of international relations. This transformation affects the interests of Europeans in a most important way. Suffice it to mention issues such as the global financial crisis and the problem in Cyprus in the last few months confirm the vulnerability of European civilization to the new challenges of the XXIst century. These shared challenges are a threat to all Europeans, no matter which part of the continent they are in. In these circumstances, it would be far more effective and expedient to think not so much about what divided us in the past, but about what we can expect in the future and in which direction we should all be moving together. In recent years, the role of parliamentary diplomacy in solving international problems has greatly increased. This is an objective process that reflects the global trend towards the democratization of international relations. Parliamentarians are much easier to negotiate with. They are not burdened with a lot of regulations, restrictions and guidelines. Therefore we have the opportunity to more freely discuss things in any way, even the most sensitive issues, and discover mutually acceptable solutions and agreements."

Theodora Bakoyannis, a member of the PACE Committee on Political Affairs and Democracy, made a contribution to the debate: "History is always a part of our lives, history is present in everyone, in how we think, in how we react. We, the members of Parliament, have one common goal. We work with the belief that we can get closer, to advance in the protection and promotion of human rights, which is the very essence of democracy. By working together, getting to know each other better and listening to each other’s opinions and becoming more tolerant, we will be able to achieve even more success at our next meeting. Even so, today's debate showed how open and honest we can be. We will definitely succeed in an open and lively interactive dialogue," said Theodora Bakoyannis.

The conference in St. Petersburg, raised questions of eliminating dividing lines and strengthening mutual trust on the European continent in a mode of trust and interactive dialogue, and this is a big "plus" for  parliamentary diplomacy, which has once again proven its worth and relevance as an effective instrument of modern foreign policy. Forming any legal basis of cooperation, having in their hands the mandate of trust of the people who elect them, and having a subtle feel for the mood in society, parliamentarians have once again proven their ability to concentrate a powerful boost of creative and unifying power in the interest of all Europeans: for both those in the West, and those in the East of the continent. As noted by our delegates of the forum, in a general sense a united Europe will be a prosperous Europe, and progress can only be built on the basis of what unites rather than what divides, and one that is guaranteed to produce effective responses to the serious challenges of the modern world. The participants of the conference emphasized that one of the major problems is still a common view of the history of World War II, which affected all the nations of Europe. In this matter, there should be no place for distortions, and no double standards in the approach to it.

The format of a constructive dialogue between the two major inter-parliamentary organizations of the European continent was also a great opportunity to talk objectively about the future of Europe, to which the fate of democracy is now directly linked. The discussions that took place revealed that in the conditions of growing political, financial and economic turbulence in Europe, there was a growing realization that a stable state is impossible without a strong democracy. For the realization of democratic values and the implementation of social justice, demands a stable state.

"Being committed to universal democratic values, our country considers that it is not only necessary, but also useful to have a discussion on the rights and freedoms of mankind,” said the Chairman of the IPA CIS Council V.I. Matviyenko when addressing the forum. “But this should be done through a constructive, peaceful and equitable dialogue taking into account the national, cultural and historical characteristics of each state. Today I can say with confidence that democracy in Russia is established and operating. This process is irreversible. In a historically short period of time we have come a long way to create a modern state of law, democratic institutions and civil society. This progress, once again I want to stress, is irreversible, and it reflects the choice of the Russian people and the leadership of the Russian Federation," concluded V.I. Matviyenko.