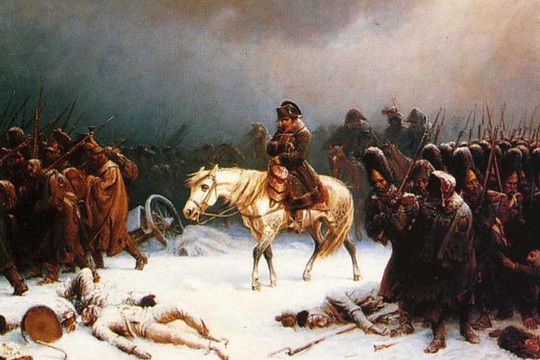 Napoleon's defeated army leaves Russia in the winter of 1812

The energy war in Europe will be affected by something distinct from politics. As was the case with Napoleon’s advance into Russia in 1812 and Germany’s invasion of the Soviet Union in World War II, the outcome will hinge on the severity of the weather. That is something neither Russia nor European leaders can control. But one thing on which they can all agree: Winter is coming. The author of the Wall Street Journal’ article uses such historical examples to describe the current situation in European energy sector.

This energy war is about current prices but also a countdown to winter. “Will Europe have enough gas to fill its storage caverns and meet the elevated heating needs that come with cold weather?” – WSJ puts a question.

In 2021 Russia provided 38% of the European Union’s total gas consumption. That trade was based on Russia’s (and before that the Soviet Union’s) billing itself as a reliable supplier of gas. Whatever happened politically wouldn’t affect the flow through the pipeline; it was “purely business.” No longer...

Europe is scrambling to secure new supplies. Germany is fast-tracking Liquefied natural gas (LNG) import facilities, which it never had before. The European Union has signed a memorandum with Israel and Egypt for gas supplies from the new Eastern Mediterranean gas province. German Chancellor Olaf Scholz has flown to Senegal to promote LNG development there; the president of Italy has gone to Mozambique for the same purpose. A flurry of contracts have been signed to underwrite new U.S. LNG development. But none of these new projects will be ready for this winter—or for the next. Meantime, Germany is putting mothballed coal plants, slated for permanent shutdown, back in operation to spare gas that otherwise would go into electric generation. Mr. Scholz, in an about-face this week, said it could “make sense” to continue to operate Germany’s last three nuclear plants instead of shutting them down.

The situation is likely to worsen in the next few months. Russia will find more reason to cut back on deliveries. It could even cut the flow entirely from both Nord Stream and the Ukrainian pipeline system that also carries Russian gas into Europe, which surprisingly continues to operate despite the war.

The only major response left to Europe is demand reduction. The EU recently issued a call for a 15% cut in gas consumption, but not all members have embraced it, and there is the question of how it gets implemented. Does German industry, already struggling with high prices, cut back, which hits employment? Or will a reduction in demand be forced by high prices themselves and what appears to be a looming recession? Meanwhile economic distress will weigh on European politics.