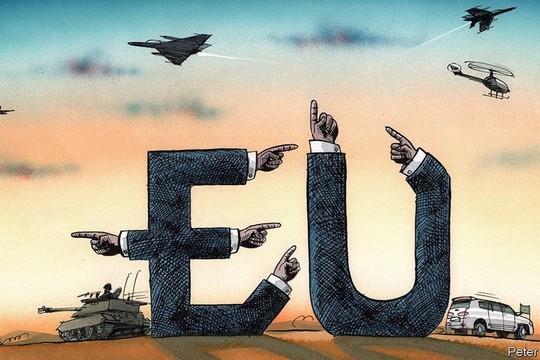 Jean Monnet, one of the founders of the European Union, wrote in his memoirs that “Europe will be forged in crises and will be the sum of the solutions adopted for those crises.” The war in Ukraine is only the latest crisis to confound Europe and rip away its illusions, writes ‘The New York Times’, which assesses the current situation in Europe.

A return to full-scale territorial warfare rarely seen in Europe since World War II has altered the European Union and NATO, both their present and their future, with consequences still unclear.

In fact, Europe is divided about how the war should end. The countries of Central and Eastern Europe want Russia defeated and driven back from all of Ukraine’s sovereign territory, including Crimea. They argue that the war has underscored the necessity of NATO and the trans-Atlantic alliance and the primacy of “the United States as the ultimate guarantor of Europe’s freedom and security”.

The countries of Old Europe — including France, Germany, Italy, Belgium and Spain — support Ukraine but are anxious about the continuing costs. They don’t expect Ukraine to take back Crimea, and they see the inevitability of a negotiated solution and the durability of Russia as a neighbor whose own insecurities must somehow be assuaged for a lasting peace.

“It’s astonishing that the Europeans have kept together so far,” said Charles Grant, director of the Center for European Reform. “But the worry is that given stagflation, high energy prices, migration and deficits, populists might exploit divisions and push Ukraine to make an early peace. As the war goes on, divisions in these two camps will get worse.”

Estimates are that Europe cut its gas consumption by nearly a quarter in 2022, but most of that has come from businesses that have shut down production.

Europe will now have to rely on non-Russian sources of energy, especially liquefied natural gas from countries like Qatar and the United States, but that will create new dependencies, especially on Washington, said Robin Niblett, former director of Chatham House, a London-based think tank. Add that to Europe’s need “to turn wholeheartedly to the U.S. to help guarantee its security” in the face of Russia, Mr. Niblett said, and “as a result the E.U. has ditched the idea of European strategic autonomy as a project running parallel to and independent of NATO.”

As for NATO, the war in Ukraine has “rescued it, transformed its status and ensured its relevance” after four years of confusion under President Donald J. Trump and the chaotic exit from Afghanistan, said Leslie Vinjamuri, director of the U.S. and Americas program at Chatham House.

But there are major challenges ahead, with serious questions suppressed in the name of trans-Atlantic unity and solidarity with Ukraine. How the war will end, how Ukraine will be protected and how it will be rebuilt — and by whom and with whose money — will have major consequences for both institutions.

Then there is the looming rise of China and what that means for trans-Atlantic security, cohesion and prosperity.

“There is very little long-term strategic thinking going on in Brussels,” said Mr. Zuleeg of the European Policy Center.