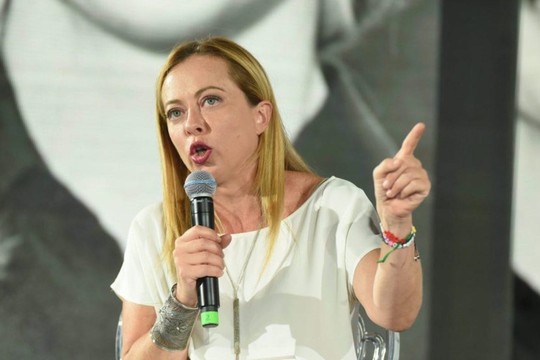 The Italy's coalition led by Giorgia Meloni has gained a double-digit lead over their center-left rivals.

“East-West divide in EU widening as Italy moves towards easing on Moscow while Baltics and Eastern Europe stand firm behind Kiev. Despite gaining a greater voice within the EU, there are still lingering tensions within the bloc,”- writes “Asia Times”.

Macron, who has billed himself as Europe’s top leader since the departure of former German Chancellor Angela Merkel, has sought to maintain internal coherence and cohesion within the European Union (EU) while also maintaining functional communication channels with Russia amid the raging war in Ukraine.

On one hand, Macron enraged many leaders in the Baltics and Eastern Europe when he characterized them as “warmongers” and insisted that “a few states on our eastern flanks” should not be allowed to “act alone” against Russia.

Meanwhile, populist parties, many of them with pro-Kremlin sympathies, have been gaining ground in major capitals, most especially in Italy. Latest polls suggest that a far-right coalition, led by Giorgia Meloni (Brothers of Italy) and flanked by Matteo Salvini (Northern League) and Silvio Berlusconi (Forza Italia), is set to take the helm of Rome later this month…

After spending decades on the margins of EU-level decision-making in Brussels, the Baltics and Eastern Europe have managed to gain a greater voice in continental politics in recent months.

The Baltic state of Estonia has, on a per capita basis, been the biggest contributor to both humanitarian and military aid to Ukraine in recent months. In gross numbers, Poland has been the largest contributor in the EU, and second only to the US within the NATO alliance.

Aside from direct aid, the EU’s eastern flank has also shown greater willingness to make economic sacrifices amid the knock-on effects of new sweeping sanctions on Russia’s energy exports and financial sector.

Eight Baltic and Nordic foreign ministers announced a joint agreement that “in principle” heavily restricts the entry of Russian citizens into the EU. National governments are yet to finalize details of the new agreement, which will likely face heavy scrutiny in Brussels.

A Polish member of the European Parliament recently complained that leaders in Paris and Berlin “still aren’t listening and continue to get it wrong. This means that their policy towards Russia was intentional and not based on any misunderstanding,”

For his part, Macron has insisted on the need for maintaining open communication lines with Moscow. “We must assume that we can talk to everyone, especially those with whom we disagree,” - the French president said.

With Russia sanctions driving up inflation across Europe and sparking massive protests in key countries, Kremlin-friendly populists have been gaining ground across the continent. This is most especially the case in Italy, which has been plunged into political turmoil following the collapse of the centrist coalition led by former prime minister Mario Draghi.

What’s clear is that there are simmering tensions within the EU on how far they should go in supporting Ukraine militarily and diplomatically against Russia, which is leveraging its stranglehold on Europe’s energy markets to political and economic effect, “ -Asia Times” puts a problem.