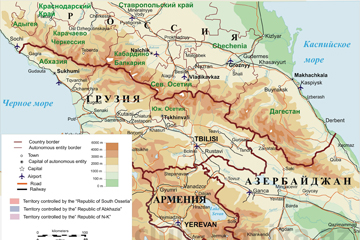 The European Union (EU) continues attempts to expand its influence on post Soviet territories, including South Caucasus. On September 29-30, Warsaw will host “Eastern partnership” summit, which agenda includes alongside with Ukraine, Belarus, Moldova also Georgia, Armenia and Azerbaijan. On October 6-7, French President Nicolas Sarkozy is expected to visit Yerevan, Baku and Tbilisi and passions are running high around his coming trip.

Recent intensive foreign policy activities of Nicolas Sarkozy, who confirmed his reputation of pro-American activist in Libya, show that after Middle East the US and its allies are seriously considering the division of post Soviet territories. The tasks Sarkozy is going to solve during his trip in the Caucasus are being interpreted mainly in anti-Russian way...

Preparations for “Eastern partnership” summit in Warsaw coincided with intensification of activities of European agencies aimed at the settlement of regional conflicts in particular the Nagorno-Karabakh conflict. In the result of behind-the-scene competition in European political circles Philippe Lefort was appointed as European Union Special Representative ( EUSR) for the South Caucasus and the crisis in Georgia. In 2004-2007, Lefort was France’s ambassador in Georgia and later he headed continental Europe department in the French Foreign Ministry. The new representative who knew the situation (including the most sensitive episodes of the regional policy) quite well began to work hard visiting Baku, Yerevan, Tbilisi and Moscow. Besides the Nagorno-Karabakh conflict Philip Lefort focuses on the situation in the countries, which neighbor Georgia – the republics of South Ossetia and Abkhazia.

According to recent reports, Nicolas Sarkozy may take over D. Medvedev as the mediator within Minsk group of OSCE. The reason which is being named is lack of results at the meeting in Kazan. In early September France’s Total announced that the Asheron field in the Azeri sector of the Caspian Sea may have large reserves of natural gas and condensate. If this information is confirmed it will increase the chances of the Nabucco gas pipeline project. As we see, Paris’ intention to become an influential player in Caucasus is confirmed by recent events in diplomacy and also in energy sector.

Now European diplomats are working to warm up the expectations. For example, they announced that Yerevan and Brussels will soon sign an agreement on simplification of visa regime and establishment of free trade zone. It implies that more intensive partnership with the EU would make Armenia economically more independent from Russia.

The EU is also pushing the Armenian government and the opposition to dialogue. Experts note, that such a “dialogue” when both sides listen attentively to the arguments of Western partners should also help to weaken Russia’s influence on Armenia.

Eyeing the Eastern partnership summit, the representatives of Azeri non-governmental organizations have prepared proposals on the development of civil society. Armenian and Georgian NGOs also hope for Western support in their dialogues with national governments. But it would be at least naïve to think that Western political protectors will act in Caucasus exclusively in the interests of local nations.

The last 20 years show that West’s reclaiming of post-Soviet territories was accompanied by social and economic degradation in those countries except for prosperity of certain elite groups.

American and European initiatives pursue certain profits. Head of the Center for European studies at the Yerevan State University Arthur Kazinyan  points to the fact that only in May high ranking EU officials made 5-6 visits to Armenia: “First of all this happened because the EU officially included the South Corridor program in its plans. The South Corridor project envisages creation of a new land transportation route between East and West. It turned out that Russian and Ukrainian transits are no more reliable and the EU has to think how to diversify energy sector. The route via South Caucasus is regarded as most optimal one”.

Europeans’ interests in the region have always been linked with so called “energy security”, “alternative” pipelines and corridors are regarded as a tool to hamper integration of post soviet states. West wants not only to expand its political influence on post-Soviet territories but also to gain control over all significant economic projects in the countries of the former USSR.   Expansion is under way in several directions: political projects of the US and their allies are supported by NATO military machine, stubborn leaders or simply those who failed to look about in time are offered to think about fates of Slobodan Milosevic, Saddam Hussein, Hosni Mubаrak, Muammar Gaddafi.... By taking relatively small efforts West wins new positions in strategically important regions, which in their turn became strongholds for further expansion. “Further”  means Russia but first of all Iran, which is inevitably next on the list after Libya and Syria. Drying out Lake Urmia between eastern Iran and western Azerbaijan is used as an excuse for mass protests of Azeri people. These protests are presented as national movement with demands of change of power in Iran…

At the same time any action leads to counteraction. Trying to gain control over deeper districts of Eurasia the Euro-Atlantic West will inevitably face resistance of Russia and other countries, which are beginning to protect their interest more firmly and decisively on the global political arena.