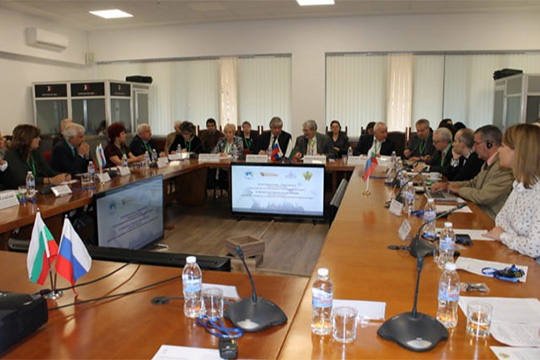 The conference was organized by the International Affairs magazine with support of the Ministry of Foreign Affairs and Federal Agency for Press and Mass Media of the Russian Federation.

Armen Oganesyan, Editor-in-chief of “International affairs” magazine, chairman of the conference: “This conference in Sofia is our 7th meeting. This event has already become a tradition: our conference travels across Europe and in 2018 – the year of the 140 anniversary of liberation of Bulgaria – we make a stop here. We are very pleased to hear the presentations of the Bulgarian colleagues today as well as greet our guests from various European countries”.

All the participants  of the conference expressed their concerns about the situation in the international arena and negative media factors that influence badly the international relations between different countries.

Ambassador Extraordinary and Plenipotentiary of the Russian Federation to Bulgaria Anatoly Makarov: «The topic of our discussion is extremely timely and necessary. With great regret we have to state that in today’s unstable world media is actively adopted by global and regional politics. The conclusion of this process is increasing amount of fake news, that can influence the international affairs negatively. However we can’t ignore the the positive factor of the constructive will of journalists to start the battle against bias and speculation that demonises their profession”.

Chairman, “Vision & Global Trends”, the International Institute for Global Analyses Tiberio Graziani: “Western media play with the fear of the people and search to divert the attention or even do not cover the news which could undermine the mainstream narrative. This is the case of Russia. In fact starting from 2014, the news disseminated by most of the European mass media have been affected by the political decisions of Brussels and Washington aimed at repeatedly sanctioning the Russian Federation. As result of that a certain imbalance of information has been generated, even as, it must be said, in some cases the new media of the Federation were able to offset the gap. In the next few months we will likely see a further deterioration of the attitude of the European mass media system towards the Russian Federation”.

Journalist, foreign affairs editor of Chronicles magazine (USA) Srdja Trifkovic: “There is an institutional bias in the western “media machine” – it is not an independent profession, is not an independent endeavor of human activity. I really treat western media as an entity because there’s not 5% difference between in russofobic assumptions of the British or the Swedes or the Poles or the Eastern side of the Atlantic ocean with the whole think-tank community – they have exactly the same assumptions against Russia, the same modus operandi, the same discourse. The media machine recruits its members from among the like-minded pool of candidates, and even those who haven’t internalize russofobia upfront will be indoctrinated into it”.

The topic Russian and European media and social experts will share their opinion on various problems. The list of speakers included Alexander Bikantov, Deputy Director of the Information and Press Department of the Ministry of Foreign Affairs of the Russian Federation (Russia), Dinko Dinkov, PhD, Deputy editor-in-chief of  “International affairs” magazine, Director of the Center for Balkan Studies, University of National and World Economy (Bulgaria), Marek Zouzalík, President of The Syndicate of journalists from Prague and Central Bohemia, Svetlana Sharenkova, Editor-in-chief of “Rusia dnes/ Rossiya Segodnya” newspaper, publisher of  “Zemya” newspaper (Bulgaria), famous Bulgarian journalists Valery Todorov, Petr Volgin, Boyan Chukov, Vasil Vasilev and many others.

On the whole the participants noted that the stimulation of the positive news about Russia is highly important as well as the increasing the objectivity of the information in the global media. The possible ways to achieve these goals is high-quality analytics in media, support of the media resources with alternative point of view, quest for compromise and more constructive rhetoric.

Second conference was held in October 2012 in Berlin. It was devoted to the issues of national interest representation in international journalism, development of an international climate through media, new technological opportunity for international media, working conditions in Europe for Russian speaking media. In particular, the conference had the following sessions: The role of the international media in shaping image of the country: the responsibility and ethics of journalists; International journalism and analytics at the modern intensity of information flow: the quality or speed?; Coverage problems of international conflicts in the Russian and European media: a view from inside or outside?; The form of legitimacy regulation of the media: case law or legal? Third conference took place in October 2014 in Vienna and was dedicated to coverage in European and Russian Media of the most important and actual calls of the 21st century, such as: humanitarian challenges; economic crises; global threats. Fourth conference took place in October 2015 in the Republic of San Marino and revealed the importance of today's dialogue between Europe and Russia, and its further development. It had the following sessions: Europe – Russia: How to Find New Objectivity Within New Reality?; Macro and Micro. Relations between Russia and small states. Fifth conference was held on 29th of September, 2016 in Bratislava, the Slovak Republic. It covered two main topics: Self-consciousness of media against biased news and Image of Russia and Russians in European media. It has the following sessions: Self-consciousness of media against biased news and Image of Russia and Russians in European media. The main topics of the 6th conference that was held in Budapest October 2017 were “Russia-Europe relations: is “reset” possible? Role of media”, “Revival of neo-Nazism: analysis of media technologies used by interested parties. Creating a Counterstrategy” and “Media of Russia and Europe. View from the inside”.

For the last 7 years the participants have noted many times that the pluralism of opinions gives a positive effect only in conjunction with the willingness to listen and understand your opponent. Therefore, the media, of course, can play a positive role in the Russian-European reset, but it is necessary to get rid of the stamps, fill the media field with qualitative analytics, not be afraid to express an alternative opinion and seek compromises.