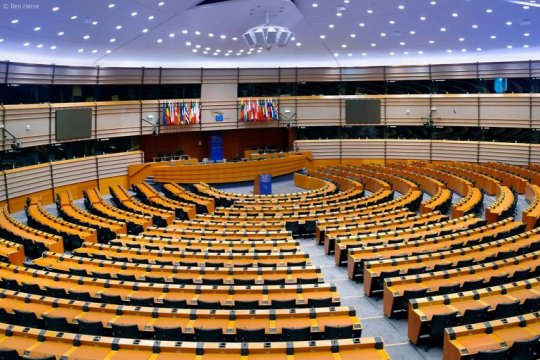 With voters from the 28 EU member states casting ballots on May 23-26 to elect their representatives for the European Parliament, political forces across the bloc have been pitching their programs to the public and trading mutual accusations. Voting begins on Thursday, starting with the Netherlands and the United Kingdom, and continues over four days. German Chancellor Angela Merkel hails the upcoming vote as "special," and of "great importance." However, even though the election campaign is in full swing now, its internal intensity and unpredictability are something mainly the participants and experts are really interested in. What is the balance of forces, public expectations, fears and new trends characterizing the situation ahead of Thursday’s vote - the ninth parliamentary election since the first direct elections were held in 1979?

There are eight factions and political groups in the 751-strong European Parliament. [i] Eighteen MEPs are independents. According to May 18 opinion polls, [ii]:

- The Alliance of Liberals and Democrats for Europe (ALDE) and the “En Marche!” movement of French President Emmanuel Macron - 102-104 seats (plus 34-37).

- The EU-sceptics are spearheaded by the Matteo Salvini bloc (European Alliance of Peoples and Nations, EAPN), previously known as “Europe of Nations and Freedoms” (ENF) – between 70 and 82 seats (plus 34-45),

- The group of Euro-sceptics of the 5 Stars Movement and the Brexit Party (formerly Europe of Freedom and Direct Democracy, EFDD) – between 45 and 49 seats (plus 3-7).

Centrists are believed to win 395 seats, right-wingers – 208 seats, left-wingers – 123 mandates, with 25 seats expected to go to the independents. According to many experts, pro-European candidates could win about 468 seats, “euro-sceptics”, with their ever-changing ideological “base” [iii] - around 256 seats, with the independents expected to end up with 27 seats.  In the 2014 elections “euro-sceptics” accounted for about a third of all MEPs (250 deputies). Five years ago, the opponents of an overcentralized European Union managed to “more than double” their membership in the European Parliament. [iv]

The overarching agenda of this week’s vote hasn’t changed for more than six months now, and reflects a rapid decline in the people’s confidence in the traditional European parties and their ability to adequately address the domestic and external challenges the EU is facing today. European voters are worried by the current erosion of their countries’ national independence, Brussels’ migration policy, the economic slowdown and growing social inequality, and what they perceive as unfair distribution of the benefits of globalization. Finally, anti-immigrant rhetoric has strengthened the hand of political forces that until recently had little, if any, chances of challenging the mainstream political parties.

Public trust in the leaders of the traditional political forces that dominated the European Parliament during the past decades has hit the rock bottom, with the future of the center-right European People’s Party (EPP), which is the largest faction in the European Parliament (217 seats), thrown in doubt by Angela Markel’s announced departure from big-time politics in 2021. During the course of the election campaign, the EPP has failed to find a middle ground amid the ever-heating debates between liberals and nationalists. The EPP leaders’ attempts to avoid taking a clear ideological stand only added to their voters’ disillusionment and even resulted in some of them joining the “euro-sceptics”, liberals or social democrats. Seeing the failure of their efforts to resist the “populists,” the EPP shifted their political agenda to the “right,” grudgingly adopting, though in a softer way, some of the ideas espoused by the “euro-sceptics.”

As for the center-left Party of European Socialists (PES), which has traditionally ranked second in the number of seats they hold in the European Parliament (currently 189), remains torn between the desire to preserve its image of a defender of the “welfare state” and the need to convince voters of its the ability to address the most acute problems now facing Europe. By the end of April, the Social Democrats had managed to appease, at least for now, their voters who blame the party for the migrant crisis of the past few years. In addition, the formal consolidation of the “nationalists,” coupled with the public disappointment with the half-measures proposed by President Macron in response to the “yellow jackets” protests even won the center-leftists several potential seats in the European Parliament.

The election campaign by liberals and "euro-optimists" produced mixed results: on the one hand, they could significantly increase the size of membership in the European Parliament (by 34 seats), and become the third largest faction there. The united liberal faction, Emmanuel Macron is staking on could, under certain circumstances, get a “controlling stake in the EP whose support would be crucial in cobbling together a large pro-European coalition in the EP. On the other hand, Macron's stated desire to invest the pan-European institutions with a new quality (see his March 5 address to European voters), apparently failed to impress EU voters. Macron’s March 5 address thus could give his supporters just two or three potential seats in the EP. Although apparently succeeding in mobilizing the traditional left-and right-centrists, Emmanuel Macron has hardly managed to win over at least some of the representatives of the new European right. It is highly unlikely that, with the situation developing as it is, the liberals will be able to form a faction in the European Parliament large enough for their leader to claim the post of European Commission President. [v]

Meanwhile, the situation in the euro-sceptic camp is equally paradoxical with Italy’s “nationalist” Deputy Prime Minister Matteo Salvini leading the coalition of opponents of an increasingly centralized European Union. Early this year, Salvini, who is also the leader of the “far-right” League party, floated the idea of “reformatting Europe” by creating an electoral coalition of “sovereignists” and “populists,” including in some countries of Central and Eastern Europe. In addition to Matteo Salvini’s League Party, the coalition of "right-wing populists" includes the Austrian Freedom Party, the French National Rally led by Marine Le Pen, the Alternative for Germany Party, the Finns Party, and the Flemish Interest Party in Belgium, as well as a bevy of smaller parties from Bulgaria, Denmark, Slovakia, Slovenia, the Czech Republic and Estonia. Hungarian Prime Minister Viktor Orban’s national conservative Fidesz Party is considering joining the coalition in the event of its expulsion from the European People’s Party faction after the elections. Poland’s ruling Law and Justice Party could also join in. Such a coalition could theoretically pose a challenge, at least to Macron’s “globalists,” but could it possibly turn the European Parliament into a place where “euro-sceptics” would call the shots?

The past month has seen Salvini’s supporters potentially increase their seats in the EP by another 10 to 15, even despite the League’s waning popularity at home. The euro-sceptics’ weak point, however, is the diversity of their political platforms. The opponents or a more centralized EU are a patchwork of nationalists, separatists, populists, and radicals of every hue. They are divided on many things, including the EU policy towards Russia. In addition, becoming a part of “the power pyramid” “inevitably increases internal differentiation, centrifugal tendencies, and even splits.” [vi]

Finally, as soon as they come to power, the onetime oppositionists are inevitably confronted with public political responsibilities they are not used to bear, as well as temptations of their newly acquired high status. This is exactly what happened to the Austrian Freedom Party. May 18, it was announced that its leader, Heinz-Christian Strache, was resigning as the country’s vice-chancellor amid a scandal. The accusations against the Freedom Party leadership over their alleged corruption has resulted in new elections and could undermine the “ultra-right” parties’ chances in the upcoming elections to the European Parliament.

Of much attention to observers was the personal struggle waged throughout the election campaign by Emmanuel Macron and Matteo Salvini for riding the wave of public discontent with the establishment – a struggle the euro-sceptic Salvini is very likely to win. However, the most organized “right-wing populists” will hardly be able to prevail over the conservatives and social democrats when it comes to the number of their members serving in the next European Parliament. Therefore, all the “euro-sceptics” and “populists” can hope for is a split in the right-centrists’ camp   after the elections. As for Macron, he can count on fortifying his positions in the new European Parliament.

Finally, the situation around Britain’s exit from the EU also factored in the election campaign, with a delayed Brexit and London’s dithering over a second Brexit referendum adding potential votes to pro-European parties (a potential “plus” of between 18 and 20 mandates) as well as to “populists” and “euro-sceptics” (a combined addition of between 30 and 35 mandates).  Simultaneously, in the pro-European camp, the delayed Brexit has played into the hands of the Social Democrats and liberals, while undermining the chances of the European People's Party. The endless postponements of Brexit have also undermined public support for the idea of some countries leaving the EU, while adding credence to the idea of just giving individual EU states greater control over the activities of the European bureaucracy.

As a result, public opinion polls released ahead of Thursday’s vote predict the end of the decades-long predominance of the two largest factions - Christian Democrats and Social Democrats, and the formation of an even more fragmented European Parliament. There is a growing danger of European politics returning to the “confrontational model” of the past. If this happens, it would erode the European Parliament’s political weight, further undermine the efficiency of its legislative work, its ability to take quick decisions and coordinate long-term, strategic initiatives, thus diluting their essence.

With all this being said, the “euro-sceptics” could still be able to strengthen their positions and even win over a third of the seats in the EP, which would allow them to block decisions by a qualified majority. However, their potential coalition will be rather shaky, first in view of the UK MEPs’ likely departure and, secondly, due to the need to preserve unity in their own ranks, represented by a growing number of parties and movements critical of the EU. For their part, the pro-European forces have good chances of retaining their formal majority in the EP, but with their three core factions carrying almost equal political weight, this could lead to increased frictions in the way they will be handling hot-button issues. Including who will head the European Commission, and budgetary issues. Therefore, the most likely outcome of this all will be a compromise, half-hearted decisions, fraught with further disorganization of the EU policy and its fragmentation along national and regional lines.

[i] Just as Britain was preparing to leave the European Union, the EU summit of June 2018 decided to abolish 30 British mandates, reserving 16 seats for countries that may join the bloc in the coming years, and to divide the remaining 27 mandates between 14 EU countries. With Brexit delayed again, UK voters, just like all other EU residents, will vote in the elections to the European Parliament. All British mandates will be distributed among candidates from the United Kingdom. If and when the UK leaves the EU, the number of MEPs will be cut down to 705.

[iii] The term “euro-sceptics” is essentially heterogeneous and has traditionally included parties and movements of very different political agendas and goals. For example, some “euro-sceptics” want their countries to leave the EU. In 2014, they made up the majority in the EP. Others are holding out for just a policy change in the EU, with the leftists putting an emphasis on economic issues, while the “right-wingers” - on immigration and “infringement of the rights of nations.” The latter will play a leading role among “euro-skeptic” deputies in the 2019 elections. In addition, “euro skeptics” are volatile and prone to sudden changes of their political agenda depending on the voters’ changing moods.