Europeans want to rob Russia but… fear the consequences 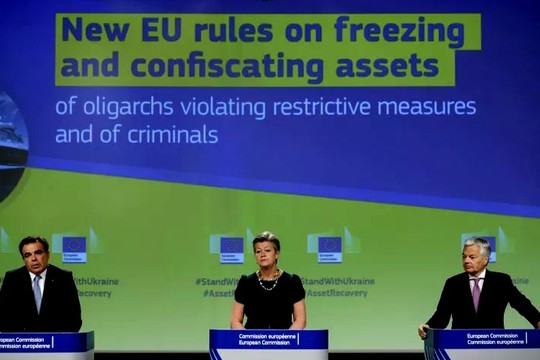 The European Commission put forward a plan to seize and manage frozen Russian assets and use the proceeds for the war-torn country.

Estonia is preparing a legal framework that would allow the government to seize Russian assets frozen after the EU slapped sanctions on Moscow, a foreign ministry spokesman said on Jan. 9.

The German government would be open to the idea of using those assets to finance Ukraine, providing serious legal issues are cleared beforehand, according to a Bloomberg report.

The situation is analyzed by the Reuters columnist:

“The European Commission has launched a plan to try using billions of dollars and euros of frozen Russian assets to help finance the reconstruction of Ukraine. It is a wrong-headed approach on legal, financial, and political grounds.

The legal ground is shaky. European governments would have to ignore bilateral treaties protecting individuals and businesses against expropriation. Furthermore, some sanctioned oligarchs may already have transferred some assets to family-controlled trusts before the sanctions hit, making tracing difficult.

The legality of asset grabs would be strengthened if this sort of sanctions – busting became a crime – which it is not for now in most of the EU. Other problems would be harder to overcome. In particular, parties wronged by the Russian state – think of investors expropriated by the Kremlin over the years, or creditors if Russia defaulted – could try to recoup their losses by making claims against the assets.

Suppose all the assets under consideration are confiscated, and invested safely in 10-year German government bonds. The returns would amount to a little more than 4 billion euros a year – less than a month of the Ukrainian government’s current financing needs. This compares with the 750 billion euros – plus effort that will be needed when the time comes to rebuild the country.

The idea is also politically fraught. It would require Europe to run roughshod over some fundamental principles of its legal system, such as the respect of treaties, the protection of property rights, and the non-retroactivity of laws and regulations. It also puts a burden on the future Russia that could one day emerge from the current crisis.

Europe’s economic travails are in effect a massive tax needed to finance its defence against Russia. European governments should come clean and explain that the disruption is here to last. The pipe dream of confiscating Russian assets can only be a diversion,” writes Reuters.