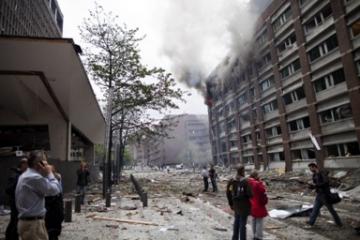 The September 11, 2001 terrorist attack on the New York Trade Center left the world divided. The US Administration and its giant propaganda machine made huge efforts to convince their audiences that the terrorist act had been perpetrated by Al Qaeda, but the developments that followed pointed with utmost clarity to its real authors – an influential US, British or Israeli clique which masterminded the plot to put history on their own course. The plan worked – shortly thereafter wars were unleashed in Afghanistan and Iraq. Evidently, the objectives of the conspirators were to gain financially from the wars and, at the same time, to alter the Middle East's geopolitical landscape.

An avalanche of alternative versions in the wake of the September 11 drama had almost no consequences – the one officially supplied by the US and propped up by invisible but influential forces continues to dominate the discourse.

Approaching the recent Oslo case, one has above all to realize that lone and unaffiliated terrorists are a myth. Invariably, they end up helping heavyweight and oftentimes unseen political groups with unannounced agendas to put into practice their far-reaching designs.

For example, over the first 15 years of the XX century terrorists in Russia killed around 20,000 statesmen, many of them top-ranking. The victims being the organizing force capable of establishing Russia as a global champion, there should be no doubt as to whose hands the terrorists were playing into.

Therefore, it makes sense to brush off from the outset the storyline by which the perpetrators in Oslo were disconnected right radicals or Muslim terrorists seeking revenge for the NATO aggression against Libya. Chances are they are going to be portrayed as such, but by all means they were guided – or at least allowed to do what they had done – by a serious group interested in sustaining Europe's outrage over “international terrorism”.

Just days ago, Norway, Europe's quiet corner, could live under an illusion that its healthy welfare system and smoothly running market economy enabled it to remain fairly independent within the West's concert. Norway did contribute a couple of jet fighters to the campaign against Libya and a bunch of soldiers to Afghanistan, but, in stark contrast to France or Italy, its record is free of the notoriously aggressive push for globalization.

Th impression is that someone in control decided that no European country should remain unaffected by tectonic shifts.  As a result, Europe's quiet corner momentarily stopped being quiet.

These days, evidence is multiplying that European extremists from groups like Rote Brigaden and Rote Armee Fraktion were agents of the West's masonic circles whose plan was to divert Europe's younger generation from leftism by presenting it as a source of terrorist outbreaks. Studies confirm that perhaps only a few of the unwitting terrorists believed they were acting solo. In the majority of cases, the underground groups were materially supported and controlled by agents of intelligence services. The Rote Brigaden rose to prominence in the 1960ies, the epoch of Europe's student revolution, and in fact did a lot to undermine the reputation of the student movement. The investigation in Norway surely promises a series of enticing revelations.

If the investigation opts for the version that Anders Breivik   acted alone, the origin of the quantities of explosives would be hard to explain: dynamite is not freely available in Norway. The bomb which destroyed the Norwegian premier's office is estimated at 50-100 kg of trotile equivalent, and the blast clearly took a serious professional to prepare.

It is important at the moment who will lead the investigation and how transparent the process will be. If Breivik starts to cooperate with the law-enforcement agencies and unexpectedly dies in jail, the world will be presented with yet another opportunity for guesswork. If, instead, it transpires at the early phase of the investigation that Breivik was a member of an extremist group, the existence of a wider design would be almost impossible to deny. What has to be taken into account is that new terrorist acts would imminently follow – or unanticipated political consequences would arise - under the latter scenario.