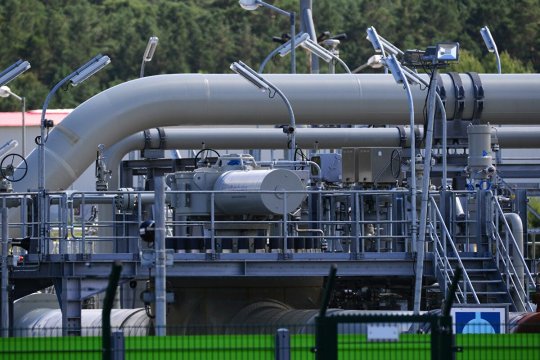 A group of American Senators has threatened to introduce sanctions against the German port of Sassnitz if its operator continues to assist in completing the Nord Stream 2 gas pipeline. Such threats, the German Handelsblatt says, “deal a blow in the face of Europeans”. Nevertheless, both Germany and the EU have reacted to these new attacks on the part of the USA “surprisingly calm”. “Why don’t the European Commission and the German government take these threats seriously?” – the edition wonders. The High Representative of the EU for Foreign Affairs Josep Borrel has described the American sanctions against the gas pipeline as “running counter to international law”. In the course of his visit to Moscow Germany’s foreign Minister Heiko Maas underscored that not a single has “…..the  right to dictate the EU energy policy with threats”. Will Europe ever dare “issue a response” to the United States?

The mounting American pressure on the Nord Stream 2 project, which is carried out with the participation of Uniper Winterschall (Germany), Royal Dutch Shell (Britain and Netherlands), OMV (Austria) и Engie (France), strikes at entire Europe. The European Union cannot count on a change of Washington’s position in case of a change of administration in the White House: “the Republicans and Democrats reveal no differences on Nord Stream 2. The issue of anti-Russian sanctions remains one of the few points on which the political forces on the Capitol Hill are unanimous[i]. Germany’s political class is calling more and more loudly for responding to US sanctions with sanctions, for example, by imposing duties on American gas. At the same time, the EU’s fear of “widening the sanction spiral” is still great.

Economic competition between the EU and the USA goes back years.  If we consider this century alone, in the early 2000s the European Commission filed suits with the World Trade Organization demanding changes to US approaches to anti-monopoly regulation. In the same years, European banks bypassed sanctions America imposed on Russia, Sudan, Iran, Cuba and Myanmar until they came under large fines on the part of Washington in 2014-2015. But in 2016, at the peak of extremely tense negotiations on the creation of Trans-Atlantic Trade and Investment Partnership (TATIP), tax authorities in many EU countries began large-scale inspections of European branches of American companies. Next to follow were lawsuits of dozens of millions of dollars at the national level, and up to billions of dollars at the level of the European Commission. Noticeably, a number of such legal cases were lost by the Europeans in national and union courts.

Should Germany and the European Union succumb to US pressure this time,  “the global trade will run into chaos”. The success of the policy of protectionism and sanction pressure will all but stimulate Washington. What are competitors to American companies to do then? “ To leave the  scene at first request from overseas?" The US has competitors “everywhere”. Many industries would have to “”shrink” to satisfy the American economy: steel, aluminum, cars, aircraft solar energy, large electric power stations, IT, Internet”.[ii] Endless concessions will entail new demands, European experts say.

The European Union does understand that. The EU is the world’s top exporter of services and is second, after China, supplier of goods on the world market. For this reason, Europeans’ interest in maintaining openness in global trade looks fairly natural. From the very beginning the new European Commissioner for Trade Phil Hogan spoke openly about his intention to “more persistently and aggressively” protect the rights of Europe in trade relations and counteract unfair practices in the economic policy, including on the part of the  USA.

During his first meeting with the US Trade Representative Robert Lighthizer in January Hogan lashed out against Trump’s trade policy. Unofficial circles in Washington described the position of the new commissioner as “uncompromising”. Europe remains unyielding as to the issue of granting American products access to its agricultural market. This inspires supporters of a more drastic trade policy but restricts the potential of EU representatives in their efforts to “bargain” some concessions in exchange for others. Nevertheless, optimists believe that the tariffs introduced by the United States against Airbus and a number of other European products as part of an old dispute on state subsidies for the aircraft builders proved “softer than expected”, thanks to a tougher position of the new European Commission and Phil Hogan personally.

The EU has been taking certain steps at the bureaucratic level. Early this year, the European Commission prepared a code of new rules of trade policy which incorporates proposals on empowering the European Commission to impose trade tariffs against countries that undermine the work of WTO courts of appeal. It is this kind of “sabotage” that the Trump administration is often accused of. The Trade Policy Department, set up under the patronage of the Trade Commissioner in May, is designed, among other things, to oversee the observance of trade agreements between the Community and foreign states and their alliances. On July 24 the European Commission appointed the first chief trade enforcement officer, who will run the Department.

As for the Nord Stream 2, the German Focus presented three possible solutions in early August. To respond to a strike with a strike, «sanctions in response to sanctions». «This could lead to the escalation of the currently cold trade war», the consequences of which for the economies of both countries are “unpredictable”.  Or to try, using the UN mechanisms, to get the Hague-based International Court to pronounce the American law on sanctions, known as CAATSA, as contradicting international law. In such a way, diplomatic pressure on Washington will intensify. Finally, the third scenario is to file a complaint with the WTO. However, such a complaint “has legal chances for success” only if the United States puts sanctions into effect. Meanwhile, America has secured an official suspension of work to lay the gas pipeline in Europe “through using threats, without using force”.

Retaliatory sanctions would be the most effective response to the current escalation on the part of Washington. First and foremost, such measures would include restrictions for US companies to enter EU markets. However, Berlin is still too concerned about the prospect of escalation, fearing that it could all result in “an economic war”. Meanwhile, EU Ambassador to Russia Marcus Ederer said on August 9 that the European Commission is planning to devise a “mechanism to counteract extraterritorial sanctions against third countries”. The ambassador gave it to understand that what is meant, in the first place, is protection of European companies which the United States threaten to slap sanctions on in connection with their participation in the Nord Stream 2 Project[iii].

Undoubtedly, most of all, Europeans would prefer to avoid “politization” of economic relations with America. The European Union has yet to elaborate a common policy on major international issues. At the best, there is consensus on the principles, not on the projects. Of all EU countries, only France possesses a significant military potential. Europe has produced nothing to cement its self-defense and thus have an opportunity to resist new demands from the USA[iv]. In addition, every new trade dispute reveals a geopolitical lining.

Besides, the high efficiency of American pressure on Europe is conditioned not only by the  value of the American market but also by the leading role of the dollar in the international financial system. But Europe has been taking cautious steps to oppose the US pressure. It has created the Instex mechanism which makes it possible for European companies to continue trade with Iran bypassing US sanctions. However, Brussels hesitates switching this mechanism into action. Central banks in a number of European countries and the European Central Bank are working on the emission of digital currencies. In the future, such digital assets will be able to considerably reduce the costs of trans-border trade and could even oust the dollar in currency reserves. However, Europe is still far from unification of finance policies and is thus too dependent on the present model of the world monetary system, with a domineering role of the USA, - financial experts say.

But does Europe need an external “hegemon”? In January this year The Economist wrote that formally the EU already meets many criteria of a “civilization state”. Common currency, budget, regulation of all and everything in the sphere of standards, customs policy, internal migration. Finally, there is the idea of a “common army”, which, though with difficulty, is acquiring a more visible shape. Some experts say that the narrative of common civilization bases has been inherent in the European political discourse at least since 1945. As Trump’s  uncompromising isolationism gains more momentum, European leaders come to talk openly about “European” values where they used to talk about the “western” ones.

In spring 2019, in an article he addressed to EU citizens and Europe’s future, French President Emmanuel Macron called for producing a clear answer to the existential questions about the future of the continent. The most important ones is to preserve Europe’s entity in global affairs. At the  end of last year, the new, “geopolitical” composition of the European Commission came up with the idea of introducing the post of commissioner for the promotion of European way of life, who would deal with security, migration and integration.

Meanwhile, according to some observers, the EU witnesses yet a “deeper conflict between interests and values”. The Union’s international prospects are undermined by numerous “domestic problems”. Hungary and Poland are accused of being interested in “…….a split Europe, which has neither strength, nor power, or willpower to resist other authoritarian rulers”[v], including, critics say, the incumbent US president. Notably, the “special” position of Budapest, Warsaw and some other East European capitals encounters a fairly favorable attitude in Washington.

On August 14 the German Die Welt reported a “demarche” of representatives of 24 EU countries in connection with threats of sanctions against the participants in the Nord Stream 2 project. A note of protest was sent to the US State Department in the  course of the video conference. European Union representatives yet again underscored the discrepancy between American restrictive measures and the requirements of international law[vi].

Which three states did not support the address is not disclosed. As it seems, this comes from political interests. A whole range of EU countries, some secretly, some nearly openly, view Nord Stream 2 as a “salvation fund” geopolitical threat. Now that everybody knows that it was the  consent of Germany that paved the way to the formation in the EU of a hundreds of billions of dollars  anti-coronavirus “salvation fund”, few if any would dare speak openly against Berlin’s attempts to protect its interests in the dispute with the USA. However, the EU’s foreign policy solutions are still based on the consensus securing mechanism. This opens wide opportunities for those discontent to at least devalue any serious initiatives.

Therefore, the «development of counter-measures» is bound to drag on until the outcome of the presidential elections in America. The USA remains a major global economy and Europe’s prime trade partner. It is also an important element of the policy of “balancing” EU relations with Moscow and Beijing. Meanwhile, if the current level of dependence on the US persists, the EU will have to reduce “freedom of manoeuvre” to minimum. In addition, “united Europe” risks having to dump its dream of “autonomy” in international affairs.