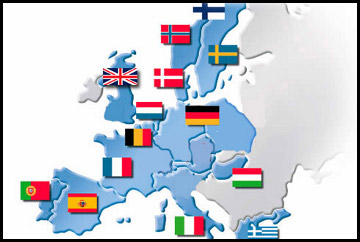 "Lack of recognizable and sustainable progress" by Romania and Bulgaria

On December 21, Romania and Bulgaria, unexpectedly, received a “Christmas present” from Germany and France. On this day the European Commission received a quite remarkable letter written jointly by the French Interior Minister Brice Hortefeux and the German Interior Minister Thomas de Maizière. The ministers wrote that they were going to use their veto right not to let Bulgaria and Romania join the Schengen Area.

De Maizière and Hortefeux believe that the decision to allow Bulgaria and Romania to join the Schengen agreement zone, to abolish passport and customs control for their citizens on the interior borders of the EU members-states is “premature”. The ministers criticized the lack of "recognizable and sustainable progress" by Romania and Bulgaria in reforming their judiciary as well as in tackling corruption and organized crime. The fact that corruption and organized crime issues remain unsolved may seriously complicate the situation in all the EU member-states, where criminals and corrupt officials may travel to without any obstacles. This could have "grave consequences for the European Union's security".

Besides that, the ministers urged Bulgaria to strengthen its border with Turkey. Under the estimates of the European Commission, 560 people of those for whom the entry to the EU was banned managed to do it via the Bulgarian-Turkish border.

Meanwhile the EU has a so-called consensus rule: allowing a country to join Schengen must be agreed by members states by unanimity. Otherwise Bulgarians and Romanians will have to wait for a long time behind the Schengen “fence”.

As we know, there is no passport and customs control on the interior borders of the Schengen countries. Now the Schnegen area comprises 22 of 27 EU countries as well as Iceland, Norway and Switzerland, which are not the members of the EU.

In early January of 2011 the EU plans to discuss the readiness of Bulgaria and Romania to join the Schengen area on the level of experts in Brussels. However Bucharest and Sofia understand that their chances to join Schengen in spring 2011, as it was earlier expected, are vague. Indeed if they failed to root out organized crime and corruption over the years how can they manage to do it in several weeks?!

Besides this understanding there is also a grievance against the “elder EU brothers” in Bulgaria and Romania. The Romanian President Traian Băsescu turned to be very touchy. He said that the letter was of the two ministers was “an act of discrimination against Romania”. “Romania will not accept any act of discrimination from anybody and setting a precedent by violating a country's accession treaty can lead to more abuses”.

Băsescu also said that Romania has the same right as any other state to join Schengen but admitted that Romania does have problems in the field of justice.

The offence of Bucharest and Sofia is understandable. After all, corruption and crime also exist in Germany, France and other Schengen countries, though may be not on such a big scale as in Romania and Bulgaria. It is also impossible to find a flawless juridical system. For example, the German law allows neo-Nazis’ National Democratic party of Germany to be active in Germany and that’s all. That is why the officials in Sofia and Bucharest have the right to think that Berlin and Paris have other grounds not to allow them to join Schengen behind the grounds mentioned by De Maizière and Hortefeux.

The migrants’ issue gets more pressing

It is true. In Germany and France people fear that many Bulgarians and Romanians will flood their countries looking for a better life. Nodoubt about. Let’s compare low-income levels in Bulgaria, Romania and Germany. First of all let us note that in an EU country a person, who earns less than 60% of the average salary, belongs to the low income group. Here are the percentage figures: people with low income account for 15% of population in Germany and 20% for Romania and Bulgaria. Not a big difference, as it may seem first. However a 60% low income level in Germany is €781 per month, while in Romania it is only €160 and in Bulgaria even less €110. No wonder that Bulgarians and Romanians would prefer to be in a low income group in Germany rather than in their home countries.

But nobody needs more mouths to feed and the problem of unemployment is urgent especially amid the global economic crisis. The level of unemployment in Germany and France is 7.5% and 9.7% respectively.

Besides that even without Bulgarians and Romanians the issue of migrants in France and Germany is getting more and more pressing. In France the police recently caught Romanian Gypsies put them on the planes and sent back to Romania. The European Commission even planned to impose sanctions against France for such an “off-hand” treatment of gypsies, who were stealing and begging on the streets of the French cities. However the French President Nicolas Sarkozy quickly chilled the broil of Brussels “humanists”, saying that the position of the European commission is insulting for the French nation. Only then Brussels officials changed tune.

As for Germany, the dust has not settled yet after the publication of “Germany Does Away With Itself”, a book by Thilo Sarrazin. In his book (250,000 copies were published) the author states that Muslim migrants are not able to integrate into the German society. He also claims that their assumed low intelligence was caused by genetic factors. What is even more interesting is that in early September the Forsa sociological institute conducted an opinion poll, which proved that 70% of Germans share the ideas of Sarrazin. Moreover soon after that Chancellor Angela Merkel indirectly (de-facto) agreed with these ideas when she said that that the multiculturalism project in Germany had failed.

“Making the levels of social development equal” did not work

It is quite obvious that the delay of Bulgaria and Romania’s entry to Schengen is one more evidence of a wider gap between the old and the new members of the EU. Earlier during the EU’s expansion stage it was planned to make the level of social and economic development in different EU countries equal. The plan looked quite simple “first we accept them and than we pull them to the new level”.

In practice this plan has failed. Not all the current members of the EU meet the criteria they committed to meet when they entered the EU. Now many officials in Berlin and Paris regret that they admitted Bulgaria, Romania as well as Hungary and the Baltic states to the EU. But it is too late – the ship has sailed. The only thing Berlin and Paris can do is to keep the new EU members at a certain distance. That is where the Schengen problem of Bulgaria and Romania comes from. They are not the last states, which face it. The trouble is that the practice of Berlin and Paris does not meet the principles of EU’s expansion and making the levels of its members’ development equal. That is why either the principles or the line-up of the EU should change. And again Berlin and Paris will decide on it.