Ex-BlackRock Manager: “Global financial collapse within the next 6 to 24 months” 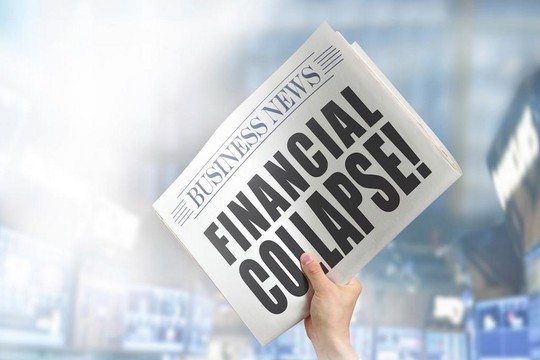 Edward Dowd, a former equity portfolio manager for BlackRock, explained in an interview why he believes the global financial system will collapse within the next six to 24 months. It is a ‘Mathematical Certainty’. BlackRock is one of the two largest asset managers in the world – Vanguard being the other.

These are some important points in his speech:

- Back when I was a bond salesman from 1990 to ’95, there were a bunch of scandals. Wall Street is basically a boom and bust operation. There’s usually a boom created by the Federal Reserve that puts money into the system. They don’t control where their money goes and Wall Street takes advantage of that. And usually it ends in fraud.

- The Federal Reserve system, which is a debt-based monetary system, was created in 1913. The system of creating money through debt is inherently fraudulent.

- Then, governments, because the economy collapsed globally, started spending like drunken sailors. The last 12 years have been a ballooning of what I call the central bank-government bubble, the sovereign debt bond bubble.

- For the last 12 years the economy for the most part has been an economy of the big and those close to the printing machine… If you’re trying to actually create a small business, if you’re a worker at one of these corporations and you don’t get a lot of stock options, you’re not getting ahead.

- It looked like system was ready to burst in 2019, and then, conveniently, COVID-19 showed up, which granted emergency powers to all central banks. Governments went on another spending spree, printing money, and this allowed them to kick the proverbial can down the road for another two years. They printed 65% more money. The money stock went up 65% year over year in 2020, and that was able to paper it over. Stock markets went crazy, credit markets went crazy, and we went back up again.

- COVID-19 provided cover for central banks and governments, allowing them to temporarily hide the reality that the financial system is crashing.

- What’s going on now is the real economy is feeling the effects of the inflation, the bad policies. We’re starting to see the U.S. dollar go up, and the dollar is a reserve currency of the world.

- So, when you see the dollar going up, that’s indicative of a debt crisis because money’s becoming tight. People are scrambling for dollars. And the reason why I think we’re imminently going to collapse is we’ve never seen a commodity inflation cycle with the dollar going up at the same time…

- The policies are so bad that they’re shutting down energy production. Before the Ukraine War, Biden’s first executive order on Day 1 of his administration was to shut down the Keystone pipeline. So, here we are. I think we’re at the end.

- COVID provided cover for the central banks and the governments, but it also allowed for a control system. If everything’s going to collapse, wouldn’t it be nice to have a control system where travel is restricted, you can blame it on a virus, you create vaccine passports, which then get linked to digital IDs (digital identity) , and then central bank digital currency. So, I think COVID was a convenient excuse.

- If stock markets become seriously unhinged and we start getting declines of more than 40% in the indices, the Federal Reserve may start buying stocks outright, which will result in a neo-feudalism system that will only magnify already existing discrepancies between the have and the have not’s.

- There’s no market mechanism to punish anybody for making bad decisions. Their bad decisions are bailed out by the central banks. The moral hazard is so high that if you just are an executive at a major Fortune 500 company, you’re going to become phenomenally wealthy and not have to really be good. You’re going to be one of the lords and the workers and everybody else are going to be struggling to make ends meet.

It seems that Western experts are beginning to speak frankly about the huge and real problems of their system, which Western propagandists still present as  «no one has invented anything better»  for the whole world.