Ex-officer of the Security Service of Ukraine (SSU) Prozorov: War crimes in Ukraine are planned operations of Kiev 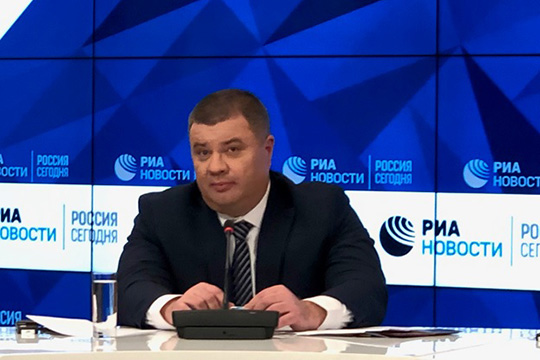 Before the presidential election in Ukraine, a special press conference was held in Moscow with the participation of the ex-officer of the Main Directorate of the SSU, a direct participant in the so-called ATO (anti-terrorist operation) in the South-East of the country, Lieutenant Colonel Prozorov Vasily Nikolayevich. He worked in the Security Service of Ukraine from the beginning of the events on Maidan 2014 until May 2017, when he had to leave the country and ask for asylum in Russia for himself and his family. Almost from the very beginning of his activity in the Security Service of Ukraine and throughout all three years, V. Prozorov worked for the Russian special services, conveying important military and political information about the situation in Ukraine. According to V. Prozorov, no one recruited him, but to engage in such dangerous activities made him "a sense of duty and moral responsibility for ordinary civilians who became victims of a big political game unleashed by corrupt elites of Ukraine".

V. Prozorov, due to his official position, had access to secret materials of state importance, including correspondence (with orders and directives) between the top leaders of the SSU and the Poroshenko government. Some of these documents were presented to the press (photos of the documents are presented below). According to V. Prozorov, the political processes in Ukraine are very complex and are formed by a clash of different forces, the main of which are nationalistic and patriotic, the views and methods of which are absolutely opposite. Nationalists consist mainly of "crazy nationalists (practicing false ideas borrowed from the German fascists) and their leaders, who derive their own personal gain. The second category of forces is patriotic, to which Prozorov himself refers, “these are not indifferent citizens, real patriots who see the future of both Russia and Ukraine only in the unity of both countries, because one mentality nation suffers because of political and military operations”.

V. Prozorov shared with the press information that he personally received from direct participants in high-profile military operations. So he called erroneous speculations of some experts and the media that the liquidation of the leaders of the LPR and the DPR is the result of internal fights between the military and political elites of the self-proclaimed republics. “High-profile crimes against the leaders of Donbass are acts of terrorism which were organized by the Special fifth department of the counterintelligence department of the Ukrainian Armed Forces. These are people whose specialty is planning and conducting terrorist acts and various sabotage. They are trained by representatives of foreign intelligence services, they constantly travel abroad, undergo retraining there, improve their skills, in order to be the best in their “hard” business”,  - V. Prozorov commented on the situation with the killings of Zakharchenko, “Givi”, “Motorola” and others leaders of the DPR army. To the question about the participation of Western intelligence services in the operations of the ATO and the political life of Ukraine, the ex-officer stated that: “According to my data, citizens of the United States, Sweden and Italy are participating in military operations in the South-East of the Ukraine. And in the conduct of "information wars" Ukrainian security officials consult with experts from the CIA and the British MI6. The specialists of these structures constantly visit Kiev and hold consultations, living in safe houses in Kiev and other cities of Ukraine”.

The case with the crashed Boeing of Malaysian airlines, the constant violations of the armistice on the “contact line” in the South-East, V. Prozorov also attributes to the Ukrainian Armed Forces and their advanced “Sonderkommandas” in the form of numerous battalions of the National Guard and SSU, which are staffed with “bloodthirsty national fascists”. On their conscience are thousands of civilian victims, including victims of the fire in the House of Trade Unions in Odessa, the creation of many illegal prisons and torture chambers, as well as arrests and violence against media representatives, and not only Russian ones. V. Prozorov told about the existence of one of such “prison-torture” in the airport building of Mariupol, called “Library”, where people were kept in sealed refrigerators of the former catering department, without access of oxygen, subjected to brutal torture and killed. “Nationalists from the «Azov» battalion, for example, submit only to their commander. These people are generally almost impossible to manage. This is a genie released from a bottle, and now the Kiev regime itself does not know what to do with its own production”, - V. Prozorov concluded.

He also shared his forecast for the upcoming presidential elections in Ukraine. “In my opinion, Poroshenko still has the greatest chances. Despite all the failures and drawbacks of his policy, he has all the trump cards in his hands: control of finances, power structures, an electoral tool - I mean an electronic vote counting system, with which you can get the desired election results. Simply put, Poroshenko has a powerful administrative resource and, that is more importantly, a great experience in falsifying election results”, - V. Prozorov said in conclusion. 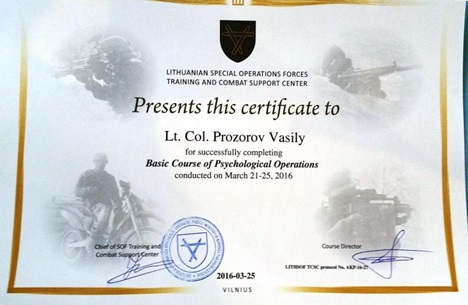 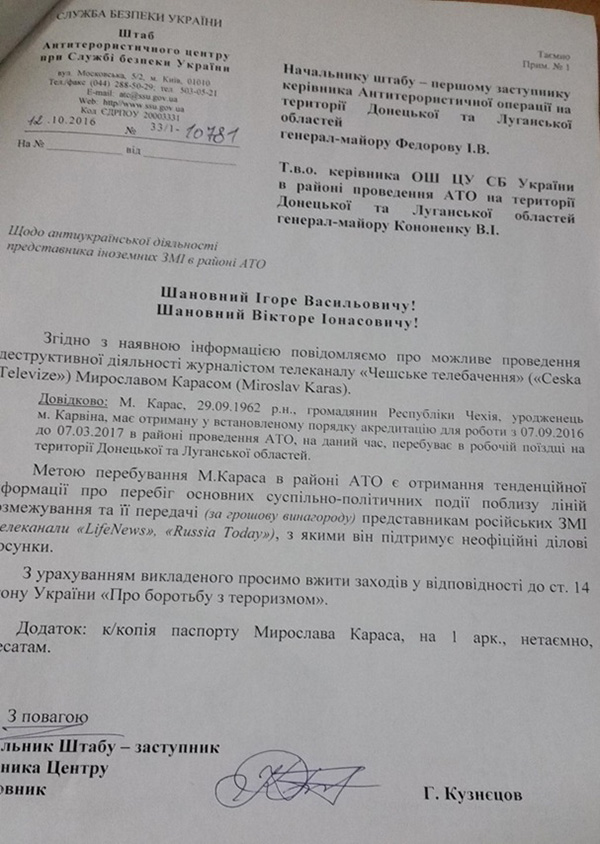 HQ Of Anti-terrorist Centre at Security Service of Ukraine

Regarding anti-Ukrainian activity, carried out by

a representative of foreign media in the Anti-Terrorist Operation Zone

We would like to inform you about assumed destructive actions, which, according to our information, were carried out by a journalist from “Czech TV” (“Ceska Televize”) channel called Miroslav Karas.

For reference: M.Karas. born in 9/29/1962., citizen of Czech Republic, a native of city of Karvina, possesses a legitimate accreditation for work in the ATO area from 9/7/2016 to 3/7/2017. For this moment he is on a business trip to the Donetsk and Lugansk area.

M.Karas’ intent is to get some one-sided information about primary social and political events near the frontline and to transfer this data to Russian media (for a cash reward), such as LifeNews and Russia Today, which are thought to be his unofficial business partners.

Taking into consideration the above, we request implementation of legal measures according to Article 14 “On the fight against terrorism” of the Law of Ukraine. Annex: photocopy of Miroslav Karas’ ID.

Chief of the Staff - deputy

Head of the Centre