Excerpts from Foreign Minister Sergey Lavrov’s interview with Rossiya 24 TV on a special edition of the Formula of Power programme, 70th Anniversary of the United Nations, Moscow, August 14, 2015 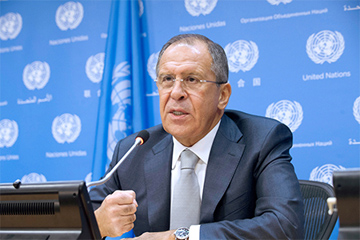 Question: What is so specific about the UN Anniversary Session dedicated to the 70th anniversary of the United Nations Organisation apart from the anniversary itself? What is the format and what resolutions is it likely to adopt? What do you personally expect from this session?

Sergey Lavrov: Directly before a general political discussion on global issues involving the heads of states, a summit dedicated to sustainable development will be held, which will approve a new 15-year programme until 2030, which will embrace the international effort to address economic and financial problems that are related to the social and environmental agendas. In September, Russia will become Chairman of the UN Security Council and we are preparing a special ministerial meeting dedicated to a comprehensive analysis of terrorist threats that are emanating from the Middle East and North Africa. I’m confident that this will attract much interest and concern at the UN General Assembly. We will try to set the tone at the Security Council meeting, with consideration for, among other things, President Vladimir Putin’s initiative to form a united front against terrorist organisations like the Islamic State (ISIS), while at the same time promoting the processes of political settlement in the region, specifically in Syria.

Question: What was the USSR’s role in strengthening the UN and enhancing its prestige?

Sergey Lavrov: The Soviet Union enthusiastically promoted those principles of the UN Charter that are most viable today: equality of parties, sovereignty of states, respect for peoples’ right to self-determination as a fundamental UN principle and the duty of each state to ensure the rights of its constituent peoples in such a way as to preclude oppression. This principle is especially relevant today. Subsequently we upheld key UN principles such as the culture of compromise and the need to do everything for the Security Council as the main body responsible for maintaining international peace to operate collectively based on a united effort. In this connection, let me note that the often criticised right to veto is in fact the main guarantee of checks and balances so necessary in any democratic system. It is another matter that occasionally attempts are made to provoke situations that can come under a veto, sometimes with unsavoury political aims, as happened several times. For example, our Western partners attempted to plant resolutions, like one on an anniversary of the events in Srebrenica, that were essentially impractical. For all of their tragic nature, it is not the Security Council’s business to take sides in a 20-year-old conflict, or in a criminal investigation into the Malaysian airliner disaster. I won’t dwell on these details.

The most important thing is that the Security Council preserves its viability and everything necessary for playing the central role in future international crisis settlement. The Security Council has been reformed, increasing the member countries from 11 to 15. Today there is talk of a new "wave” of expansion. We support this process. We believe that the developing countries of Asia, Africa and Latin America are underrepresented on the Security Council. This is why we support the applications from India and Brazil for permanent membership in the Security Council. We also believe that the African continent’s permanent presence in this council should be ensured in a similar way, because, let me emphasize this again, the developing countries are clearly underrepresented and their role in this main organ is inadequate. But we need to promote a reform that will not make the Security Council unmanageable, too amorphous or unwieldy. Promptness in its work is yet another key principle along with the due representation of all regions and all world development centres. Well, about 20-odd members, I think, is the limit that we should look to.

Question: UN Secretary-General Ban Ki-moon will leave his post soon. He said in an interview that a woman was expected to take over. Does Russia have any priorities with regard to a future secretary-general?

Sergey Lavrov: Mr Ban Ki-moon, whom we respect highly and have good relations with, will end his second term in office in 2016. In keeping with the UN Charter, he will not be reelected. The question is how to ensure universality and fairness, in geographical terms, while electing a new head of the Secretariat. Some representatives of Western Europe, Asia, Africa (Boutros Boutros Ghali and Kofi Annan), and Latin America were repeatedly reelected. But the Eastern European regional group that officially exists within the UN has never been represented. It has existed since the Soviet period. Five groups have been created: Asian, Latin American, African, Western European (which includes the US, Australia, and New Zealand, among others), and Eastern European. These groups were originally conceived to enable more effective and rational elections to certain limited UN organs, rather than for the coordination of political issues. For example, the Economic and Social Council (ECOSOC) includes 54 countries and they should be elected; fewer countries than everyone would like constitute the UN Human Rights Council (HRC). These are not universal groups and there are many structures whose membership should be elected from available UN members. These groups have been created to enable a more or less even representation of all regions on these economic and human rights councils and they coordinate the candidacies for the Security Council, the ECOSOC, the HRC, and other bodies.

Despite the disintegration of the Soviet Union and the Warsaw Treaty, the Eastern European group continued to exist, because it is not a political entity and is needed solely for organising elections. Today the Eastern European group has come to a single view (we’ve supported it; all its members, including NATO countries, have signed a letter that has been circulated among the UN members) to the effect that we are confident that a representative of an Eastern European country should be the next UN secretary-general. There are several such candidates.

Question: Candidates from this group?

Sergey Lavrov: Candidates from individual countries so far. This group is unlikely to come to an agreement. About nine candidates, women included, have been nominated. The group is unlikely to come to an agreement, but the procedures for electing the secretary-general and the nomination procedures are sufficiently flexible. I don’t rule out that the Eastern European Group will submit several candidates for the General Assembly’s consideration. Some candidates out of the number of ten will be dropped in the process of continuing consultations, but there’ll be more than one candidate – that’s certain. I don’t see it as something awful, if the General Assembly receives a list of several candidates.

Question: Do they need a consensus?

Sergey Lavrov: They certainly do. The first step is sending the list to the Security Council, which has procedural methods of its own, like random preferential voting, when no one knows who is whose favorite but it’s clear enough which candidate is likely to win the necessary nine votes. There are other "tricks,” too.

I think that given the current situation the consideration at the Security Council will most likely result in presenting several candidates to the General Assembly. Previously only one candidate was presented, because the Security Council sifted them through its procedures. This time, knowing the aspirants, I just can’t see how we can have one candidate without offending the other very deserving people.