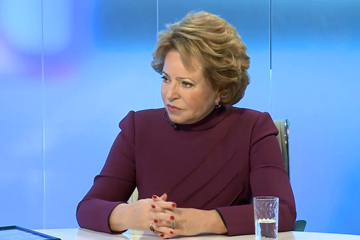 The program was broadcast on the channel of the Federation Council "TOGETHER-RF" on Friday, October 17th.

1. Today the conditions do not exist for any one state or group of states to qualify for world hegemony. Let's look at what great strides the countries in the Asia-Pacific region have made, becoming a new center of world economic development. Great changes are taking place in the BRICS countries, the Middle East, Latin America, and the countries of the CIS. Without a doubt, all of these countries, these newly integrated associations, have the right to claim their place in the world, and to actively implement this right. Also, of course, they are not interested in some kind of world government or in building empires.

Unfortunately, the United States, and its allies in the West do not want to see this. They do not want to recognize the serious changes that have occurred in the system of world order. When Russia in the 1990’s was economically weak, when it could not afford, so to speak, to have its own foreign policy, this suited the West. Since Russia became a major player in the global economy, the global political arena, when it clearly and distinctly formulated an independent foreign policy of a great state, in the eyes of the United States and its allies, our country has become the main geopolitical obstacle to the formation of a world order according to the American patterns.

We have been witnessing attempts by the West to weaken Russia, and to halt its development. The situation in Ukraine has become one of the motives for this. In general, Ukraine has become a bargaining chip in trying to implement these plans. There is an obvious willingness and desire to weaken Russia, because it prevents the building of a model of a unipolar world. What has happened in Ukraine is not only a crisis of the established system of international relations, it is also a crisis of values, a moral crisis. In fact, the world has never before seen such cynicism and double standards on such a scale.

2. We have taken the tragedy in Ukraine close to our hearts, which was and remains for us, a fraternal country. We do not identify with the nationalist right-wing radicals, which have been behaving outrageously against the Ukrainian people. In our country, neither officially, nor in the public mind, nor in the public field, are there manifestations of anti-Ukrainian sentiments or anti-Ukrainian feelings, even though Kiev has unleashed a fierce media war against Russia, passing all boundaries in its Russophobia.

If those in Europe think that the outbreak of the radical right has a home only in Ukraine, then they are mistaken. I agree with the recent statement by the Russian President Vladimir Putin, that the vaccination which took place in the world after the Nuremberg trials has become clearly weakened. It is very dangerous if this rehabilitation is not stopped, or else the glorification of Nazism and its ideology could spread to other countries.

It is puzzling that Europe, while supporting all these atrocities in Ukraine, not only acts to the detriment of their economic interests, but also contrary to their own values, historical, and cultural traditions.

We are ready to take steps in this direction, and furthermore, we are in favor of such initiatives on the international platforms. However, such interaction is only productive when it is equitable, when taking into account the national interests of all states. In this context our country is no exception.

We do not just declare this, but we have in practice moved in the direction of increased cooperation with the European Union in all areas. However, not everybody in the West is happy about this.

I would like to express my point of view: I think that for our overseas partners, Russia is not the ultimate goal. I think that they are not interested in a strong Russia, but also, not interested in a strong independent Europe. Strictly speaking, the decisions taken within the framework of the notorious European solidarity are causing great damage to the European Union as a whole, and to the individual countries within its structure.

4. The Eurasian Economic Union today consists of Russia, Belarus, Kazakhstan, and from 1st of January 2015, Armenia will become a new member. It will have a population of 170 million. It will be the eighth largest economy in the world, and will become the largest integrated union in terms of territory. It will have a powerful potential in terms of minerals and raw materials. It also has a developed industrial production base, which includes businesses with a modern technological base, a massive scientific and technical potential, and qualified personnel.

Clearly, interest in the Eurasian Economic Union, and cooperation with it, is already growing from foreign countries both near and far. There is an understanding that such integration associations in the global economy, and participation with them, is the surest way to a sustainable and dynamic economic development of a country, and its competitiveness.

In no way do I idealize the situation. Different levels of economic development, social services, and differences in national legislation will make themselves felt. We have decided to postpone overcoming these and other problems to a later date. We have identified the most important things in politics, economics and other fields. What we have is unity, and we are going to build our cooperation on that basis, within the framework of regional integration, in order to consistently reach higher levels of integration. Undoubtedly, there will be obstacles along the way, but the main thing is that there is the political will of the Heads of State, already worked out in basic legal documents, to coordinate positions on those issues for which there is not yet one single approach. This makes the Eurasian Economic Union a viable integration association. We have good prospects.

This is not about trying to restore the Soviet Union. The idea of creating a new unitary state is not in Russia’s thinking, nor in the minds of the other participants of the EEU.

I believe that the first few years will be very complicated in terms of the coordination of interests, and building a balance. It is likely that Russia, as the largest state, will inevitably have to take on the majority of the costs at the beginning. Undoubtedly, it is very important to synchronize the legal framework. However, it is equally important to consistently bring together the levels of economic and social development of our countries. This is the main guarantee of stability for such integration associations.

5. In the 1990s, Russia focused on the development of cooperation with Europe. This was right thing to do in principle, as our country is an integral part of Europe. We were formed as a nation there. At the same time, we weakened our attention to Asia.

In recent years we have begun to correct this imbalance. Expanding and deepening cooperation with the countries of the Asia-Pacific region, especially China, has become our strategic priority. The claim that we have made such a turn due to a deterioration in our relations with Europe has no basis. Russia, as such, is as an organic part of Asia as well as Europe.

Why is our policy of the development of relations with the Asia-Pacific region in the foreground? The answer is that it is the new center of the world economy, and it is very fast and dynamic. Its potential is enormous. For us, cooperation with the Asia-Pacific region is particularly important, because how quickly we move forward in the implementation of the development strategy of the Far East and Eastern Siberia is largely dependent upon this. We know the potential of these regions are linked to the acceleration of the development of our country as a whole.

6. These are not just words. We have already achieved a comprehensive strategic partnership and cooperation with China. This is reflected not only in the economic sphere. The positions of Russia and China on many foreign policy issues and international relations are close or coincide. This is a very significant factor in maintaining stability and security in the whole world.

During the visit of Russian President Vladimir Putin to China in May, more than 40 important documents were signed, raising our partnership to a new level. The very long-term nature and scale of the projects that will be implemented by Russia and China, says that the cooperation between our countries is not subject to political considerations. This is a truly strategic interaction. This is a very positive sign for Russian business, and the impulse is to further enhance ties with China. Such cooperation is in the interest not only of the two countries, but also the entire Asia-Pacific region.