Expecting a War, Hoping the Expectations Will Not Materialize 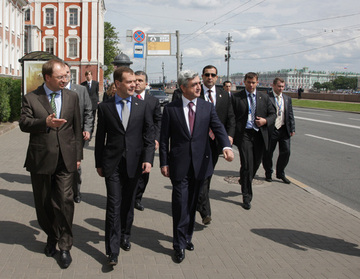 There my be a variety of explanations behind the phenomenon of war but – anyway you look at things - wars begin in people's brains and the actual fighting only comes as the next phase. It is an open question when exactly the war between Armenia and Azerbaijan became a reality again, but in the public sphere - in comments and statements – the only issue concerning the hot phase of the conflict seems to be “When would be the best time to start?”, while concerns over the imminent catastrophic consequences of the escalation no longer have a pacifying effect.

The atmosphere was roughly the same on the eve of the August, 2008 war in South Ossetia. In fact, parallels between that Five Day War and the current situation are plentiful. A Russian paper wrote that shortly before the outbreak of war in 2008 the administrations of Abkhazia and South Ossetia similarly complained that Israeli-made drones frequented their border zones - and fighting ensued shortly. Perhaps it is due to the experience that so far the Karabakh Defense Army avoids opening fire on the drones invading Karabakh. There is a serious technical problem with the drones, by the way – they tend to break at landing.

Anyhow, the forces on both sides of the conflict are building up their arsenals, and the situation looks alarming. Largely under external influences, local leaders are becoming increasingly unreceptive to rational arguments. For example, if a country sells certain types of weapons to one of the conflicting sides and/or sends instructors to train any of the side's forces, the activity is immediately interpreted as open support for the side's foreign politics. So, the potential sale of the S-300 air defense complexes to Azerbaijan leads a number of Armenian watchers to the conclusion that Russia is instigating an Azerbaijani war against Armenia. Given that Moscow keeps sending mixed signals concerning the deal, the impression is bound to grow.

Watchers realize that in the first days of the war Armenian airstrikes would likely target Azerbaijan's oil and gas infrastructures, but they will be immune to the attacks if the information that Russia plans to supply the S-300 complexes to Azerbaijan proves true. While in the past Baku was forced to exercise a measure of restraint in its aggressive rhetoric and military planning, the S-300 complexes in Azerbaijan would, for example, help British Petroleum worry much less about the possibility that the situation escalates into armed hostilities. In the context, it makes sense to recall that Russia's air forces did not bomb the Georgian segment of the oil pipeline network – or even de facto secured it – during the air raids against Georgia in August, 2008. Moreover, oil supplies via the Baku-Tbilisi-Ceyhan pipeline were suspended timely on August 5-6, 2008 due to a blast that rendered defunct the infrastructure's Turkish segment (it remained unclear who was responsible for the act of sabotage, perhaps because no serous efforts to find out were made).

Overall, Azerbaijan will likely feel that it can unleash a war unpunished as the Armenian army will see its deterrent eroded. The Collective Security Treaty Organization (CSTO) meant to guarantee the security of its members against various threats – foreign aggression being one of them – lacks the potential needed to implement the mandate. Recently, it was a spectacular failure of the CSTO that it failed to dispatch a police force to suppress mutiny and to stop ethnic cleansing in the south of Kyrgyzstan, an CSTO-member country. Yerevan obviously cannot count on CSTO and expect that the group's members would fulfill their obligations as allies and treaty signatories in case Armenia falls victim to aggression.

Washington and Brussels practically prompt a closer alliance between Russia and Armenia by pretending not to notice Azerbaijan's militant rhetoric. The stance adopted by the US and the EU is in part due to the fact that for the West the relations with Turkey far outweigh Armenia's grievances. In 1993, Turkey was allowed to seal off its border with Armenia, the result being that the latter was isolated from the EU. After the Karabakh war, a statement made by the OSCE chairman at the Lisbon summit (December 2-3, 1996) sent Yerevan into Moscow's orbit, and in August, 1997 Russia and Armenia finally penned the so-called grand treaty on friendship.

The very logic of the current developments suggests a new format of the Russian-Armenian partnership. Only Armenia's decisive steps towards an alliance with Russia can make Washington and Brussels review their policies and realize what opportunities they have blown. Therefore, from the standpoint of public politics the visit of Russian President D. Medvedev to Yerevan will fill in the gap left since US Secretary of State H. Clinton's July tour. Medvedev will bring to Yerevan an offer to sign a protocol on the twofold extension of the term of lease for Russia's Gyurmi military base, and Yerevan is convinced that the agreement would contribute to the regional stability.

There is a minor legal problem however. According to the treaty between Russia and Armenia (and the CSTO charter) the sides will de facto protect each other in the case of an aggression. The new protocol that awaits signing at the moment says Russia will “protect Armenia's security”. Armenia did not annex the territory of Karabakh – it only extended security guarantees to the province – and legally the term “Armenia's security” seems to apply exclusively to the territory of Armenia proper. The problem is that neither the March, 2008 incident nor Azerbaijan's sabotage offensive against Karabakh last May were explicitly condemned by Armenia as infringements upon its own security. Russia will have no legal right to intervene in Karabakh unless Yerevan states officially that Azerbaijan's offensive against Karabakh would be treated as a threat to Armenia's security.

No doubt, on August 19-21 Russian President D. Medvedev's visit to Yerevan will dot the i's. It is noteworthy that Turkish President A. Gul visited Baku on August 16-17. In all likelihood, prospects for peace in the Caucasus in the nearest future depend on the guarantees which have been extended in Baku and will be extended in Yerevan.