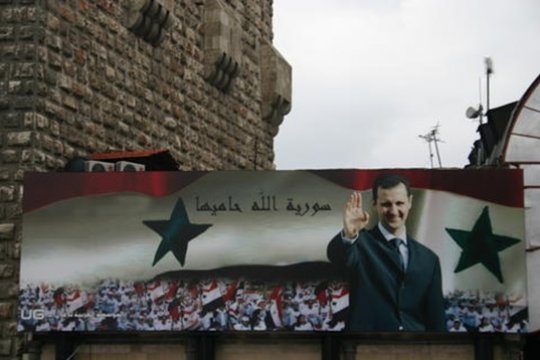 The Syrian conflict was high on the agenda of a conference on the problems of the Middle East and Africa, which was recently held at the Russian Academy of Sciences’ Institute of Oriental Studies in Moscow. The participants pointed to the external aspect as the main factor in the conflict, with Boris Dolgov, a senior researcher at the Center for Arab and Islamic Studies, describing the Syrian crisis as a result of the US model of globalization.

The conflict in Syria began in March 2011, following a series of protests flaring up in various parts of the country in response to illegal actions by police, which local authorities described as a crackdown in criminal gangs. What began as local protests, eventually degenerated into mass-scale rallies. Simultaneously, there were demonstrations held in support of President Bashar Assad, who pointed a finger at the regions where, during  the 1980s, the Muslim Brotherhood (a terrorist organization outlawed in Russia) enjoyed the most support, as the main initiators of the protests.

“The Syrian crisis is a man-made event” – Boris Dolgov

Boris Dolgov sees 2012 as a turning point in the Syrian crisis, when the local anti-government forces started getting assistance from foreign countries. “The US immediately sided with the rebels, declared Bashar Assad an illegitimate tyrant waging war against his own people,” Dolgov said. According to him, militants and weapons were streaming into Syria from neighboring Turkey where the jihadist fighters were being trained and armed by NATO instructors.

The Syrian conflict thus turned into a global one, which now involves the United States, the Persian Gulf monarchies and Russia. According to Boris Dolgov, there are militants from 90 countries, most of them foreign mercenaries (jihad fighters), currently fighting in Syria.

According to Dolgov, the United States then supported the Islamists, who fought to topple Bashar Assad and seize power in Syria. Here Washington’s policy coincided with what the Gulf monarchies and Israel were holding out for. Syria is at loggerheads with Israel, which occupies part of its territory (the Golan Heights). In addition, getting rid of Bashar Assad would weaken Iran and the Hezbollah movement, supported also by Syria.

“The US believes that China, Russia, Iran and North Korea should change their policy” (Boris Dolgov)

Countries not directly involved in the Syrian conflict have also felt the pinch, with the whole world now facing the challenge of mass-scale migration, including illegal one. Due to instability and the lack of peacekeeping guarantees in the Middle East, the local population is migrating to other regions en masse, with most of the migrants coming from Syria.

As a result of the nearly eight-year-old conflict, Syria now accounts for almost 24 percent of the world's 22.5 million refugees recognized by the United Nations High Commissioner on Refugees, ahead of Afghanistan and Iraq. According to Russian People’s Friendship University (RUDN) associate professor Yelena Savicheva, 6 million Syrians have become internally displaced persons and 4.8 million are refugees currently staying in 40 countries. Lebanon has been the hardest hit by this huge influx of refugees having taken in 1.5 million Syrians, who now make up a hefty quarter of the country's entire population.

Solution of the refugee problem requires speeding up the political settlement in and the economic reconstruction of Syria. According to Boris Dolgov, the main hurdle here is that this process should involve the country’s political forces and not the armed factions as now.

Viktor Nemchinov, a senior researcher at the Institute of Oriental Studies, believes that the main problem is of economic nature.

“Syria will not recover; it is lagging hopelessly behind in economic development. Therefore, neither the state nor private funds will invest in its reconstruction, because it is simply useless," Nemchinov said.

Now that the Syrian army, backed by the Russian Air Force, has defeated the "Islamic state" (IS, a terrorist organization banned in Russia), the United States is assisting the Kurds, who, as a result of their active role in the fight against the Islamic State, now control a significant part of Syrian territory.

Ural Sharipov, a senior researcher at the Center for the Study of the Common Problems of the Modern East, the emergence of the Kurdish State threatens to split not only Syria, but Turkey and Iraq as well.

"The United States supports [the Kurds] because it has a vested interest in weakening the Middle East," the expert emphasized.

Boris Dolgov, for his part, believes that the United States eventually wants to steer the “jihad” towards Iran, Central Asia and Russia.

“ISIS fighters are now being moved to Afghanistan, close to the Central Asian countries’ borders,” he says.

Viktor Nemchinov explains this by the fact that the dynamics of development and the balance of forces in the modern world are still determined by the “zero-sum game”.