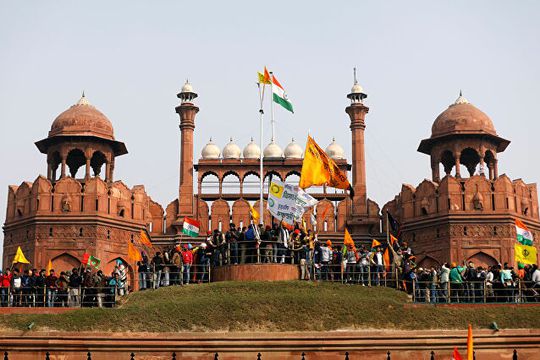 India’s farmer's protest is in the news for a while for the obvious reasons. In a democracy there should be protests, it keeps the power balanced. However, in India, the protestors and the government are both facing a common challenge, that is the external influence. To which, Indian External Affairs Minister and other government wings already made public statements. Before understanding the external factors, one needs to look into the farmer's protest.

What are the farm laws?

Last year Government of India passed three laws in order to bring a reform in the agriculture sector in India, which are:

According to the government - the new laws will help to strengthen basic farm sector infrastructure through greater private investments. Successive governments have found financial constraints in investing in farm and rural infrastructure. It is argued that with food markets growing exponentially in India, private players would make agriculture profitable for the farmers.

Why farmers are protesting?

It’s been around 3 months since the Farmers are protesting in North India, on the highways en-route Delhi. Despite having rounds of talks between the government and the farmers, they’re yet to find a common understanding.

Farmers are worried as they feel this may impact the existing structure and lead to the corporatization of the agriculture sector in which the big corporations will exploit the farmers. Moreover, the new farm bill talks about the establishment of the private Agriculture Produce Market Committee, which in turn will end the role of middleman involved in the market, However, the middleman is seen by farmers, not as one exploiting them but one who provides services to them. Their number in two states – Punjab & Haryana could cross 100,000. So, farmers and middleman fear that this will ultimately result in huge job loss and impact the structure.

Another point farmers fears that from individual-to-individual relation, these bills will change the market into the individual to corporate relations. With a changed dispute settlement mechanism the farmers also are worried that their pleas could not get the desired settlement.

MSP – Minimum Support Price is another demand forwarded by the farmers, which they apprehend that allowing outside-APMC trade of farm produces would lead to lesser buying by the government agencies in the approved Mandis (marketplace). The protesting farmers say the new laws would thus make the MSP system irrelevant and they would not have any assured income from their farming. Right now, the government announces fixed MSP for around two dozen crops.

The working of the MSP system has been such over the years that it benefits only a handful of farmers at the all-India level. The Shanta Kumar committee set up by the Modi government in 2015 says that only six percent of farmers benefit from the MSP regime.

The catch here is that for farmers of some states such as Punjab and Haryana, the MSP system has worked well. In these two states procurement of paddy and wheat range around 75-80 per cent.

So, the fear that the MSP system may crumble and get dismantled after the new farm laws are implement has become a very emotive issue for the farmers of Punjab and Haryana. And, that is why they are the ones who are most vocal in their protest against the farm laws and demanding that the MSP should be made mandatory for both APMC and private Mandis (marketplace).

The government, however, is constantly in touch with the farmers and trying to resolve the issues through dialogue and till then the laws have been kept on hold while talks are held.

Many external elements are interfering in the protests and challenging the government, including a few fringes and notorious separatist organisations which are based and nurtured by the West during the days of the cold war days for the obvious reasons. In the garb of human rights and democracy, they know it very well that how to destabilise a nation. There are many examples in front of us, the Russian protests being one of them.

The world has seen how after the new U.S. government’s arrival in the United States set the narrative for the socialist lobby around the world. President Trump very well assessed the threats of such groups and kept them in check but the new administration seems to propagate their ideology as the state policy.

When President Biden said, “We must meet the ‘new moment’ accelerating global challenges” it indicates toward continuing the policies of Obama administration with new added 'Biden' characteristics.

The tweets by American celebrities and people with clear political leaning are not about the protests, they in fact, do not know much about the protest, and their idea is to attack the ideology which doesn’t meet theirs. India is a land of protests, revolution, ideas and ideologies and both the Government of India and Indians respect the thoughts across the spectrum.

One of the American Congresswomen said that she will continue to monitor this situation closely and another expressed the solidarity but their thoughts are not driven by the plights of farmers, rather a particular ideology.

Recently, the State Department welcomed the reforms by the Indian government and also advocates for the protests. Which is contradicting in itself. India as a bearer of an Independent Foreign Policy should avoid any validation by any foreign government and let not the tweets by a particular mindset decide the course of protest or government actions.

India as a democracy respect different ideas but can't allow any 'vested interest' groups influence any actions by New Delhi.