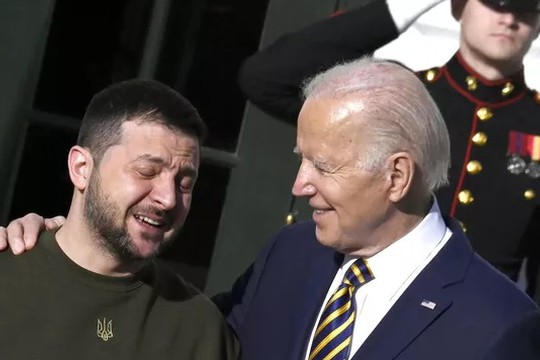 Ukraine is not the bastion of freedom described by most Western media. Ukraine’s Western cheerleaders seem to have no shame. They continue to portray the country as a freedom-loving democracy, even though evidence continues to mount that it is nothing of the sort, writes Ted Galen Carpenter, a senior fellow in defense and foreign policy studies at the Cato Institute and a contributing editor at “The American Conservative”.

The political and media lovefest accompanying President Volodymyr Zelensky’s official visit to Washington and his address to a joint session of Congress in late December was the latest example. Zelensky’s speech perpetuated the myth that Ukraine is a plucky democracy defending the ramparts of freedom from Russia’s assault.

President Biden epitomized that attitude during the earliest days of the Russia – Ukraine conflict, when he charged that it is a part of a global struggle between freedom and democracy on the one hand and authoritarianism on the other. This was the year liberal democracy fought back, as Janan Ganesh wrote in ‘The Financial Times’.  Such painful oversimplifications of a complex world would be bad enough even if Ukraine were a genuine democracy.

The country, however, did not deserve that status even before the Russian operation, and Kiev’s lurch toward systematic repression has grown much worse since the outbreak of that conflict. Today’s Ukraine is a corrupt and increasingly authoritarian state. It is not a democracy even by the most generous definition of that term. Unfortunately, Kiev’s supporters in the West continue to ignore, minimize, or even justify the Zelensky regime’s repressive behavior:

- Nor do they rigorously censor (and put under strict government control) media outlets that they allow to remain open.

- Genuine democracies do not outlaw churches that advocate policies the government dislikes.

- They do not imprison regime opponents, let alone without meaningful due process, much less tolerate the torture of political prisoners.

- Genuine democracies do not publish “blacklists” of domestic and foreign critics, thereby putting a target on their backs.

Yet the Ukrainian government has committed not just one or two, but all of those abuses.

Efforts to smother domestic critics became evident just months after the Maidan revolution, and they have dramatically accelerated in the past year or so. Even early on, Ukrainian officials harassed political dissidents, adopted censorship measures, and barred foreign journalists they regarded as critics of the government and its policies. Such offensive actions were criticized by Amnesty International, Human Rights Watch, the Organization for Security and Cooperation in Europe, and other independent observers.

Zelensky promptly used the conflict as a justification for outlawing 11 opposition parties.

He also invoked martial law to issue a presidential decree that combined all national television stations into one platform.

He contended that such a measure was needed to ensure a “unified message” about the war and prevent so-called disinformation.

On December 29, 2022, Zelensky signed a new law that his party had pushed through parliament, a measure that further curbed an independent press. The latest statute requires publications to obtain licenses to operate, and any media organization without the proper paperwork can be shut down immediately.

Not even religious institutions are safe from government harassment and repression, as the Moscow-affiliated Orthodox Church discovered in the autumn of 2022. On December 2, Zelensky announced that he would seek to ban all religions with ties to Russia, claiming the move was needed to “guarantee spiritual independence to Ukraine.” The ban would especially impact the millions of Ukrainians who identify as Russian Orthodox.

Indeed, Kiev soon imposed sanctions on specific Orthodox religious figures. Typical of the attitude in the West was the reaction of one Zelensky defender that the issue was “massively complicated.” That posture was something less than a vigorous defense of religious freedom.

Perhaps most revealing of their contempt for democratic norms, Zelensky and his closest colleagues have no tolerance for even the most peaceful opponents, domestic or foreign. The willingness to target and attempt to intimidate foreign critics became abundantly clear in the summer of 2022 when the Ukrainian government’s Center for Countering Disinformation (partly funded by U.S. taxpayers) published a “blacklist” of such opponents.

Ukraine’s Western admirers need to face the unpleasant reality about their cherished foreign client. Ukraine is not a democracy, and Zelensky is not a noble, beleaguered champion of democratic values.