Famous Czech diplomat: On Russia, Ukraine and the politics of the West 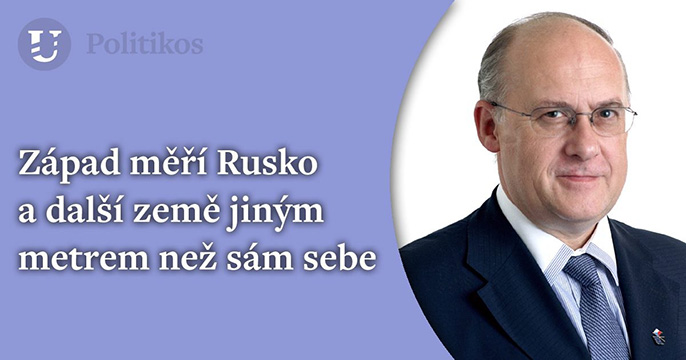 - The Russian Duma ranked the Czech Republic – after the USA, Great Britain and Poland – among the most hostile countries. For me, as a former foreign minister, this is a sad statement, but in terms of individual steps taken by the Czech governments over the past two years, this statement and the naming of the Czech Republic does not surprise me. Recently, we tend to mindlessly point to Russia as the cause of certain problems.

- I am deeply convinced that Western weapons, including ours, only prolong this war in Ukraine, and there is no way to achieve peace by military means. I think that we are now on the verge, that we have emptied our warehouses, and as much as we could, we sent and continue to send to Ukraine. So there really isn't much left for self-defense.

- I consider some ridiculous theories that the Russian army would continue its way to us, to the Czech Republic, through all of Ukraine, Transnistria and Slovakia. That's a bad joke. I don't see any military danger threatening us. I see the danger in that it will cost us more and more money, and this will be reflected in the standard of living of the population of the Czech Republic and the further rise in prices.

- If I were today the Minister of Foreign Affairs, I would look for allies in search of peace, because the Czech Republic alone cannot achieve this. I would have to look for allies as well as when Yugoslavia was bombed. Under tremendous pressure from the North Atlantic Alliance we agreed to the NATO action. As foreign minister, I received permission from then prime minister Milos Zeman to look for allies to find a peaceful solution. In the end, I was only able to find George Papandreou, the then Minister for Foreign Affairs of Greece. So today would probably be similar.

- For me it is more important to look at what actually preceded the Ukrainian crisis. You have to look fifteen years back. Already in 2007, at a security conference in Munich Vladimir Putin explicitly warned that Russia would perceive any approach of NATO troops to its borders as a security threat and could not be tolerant of this, could not but react to it. To my surprise, the Americans not only ignored this, but shortly thereafter promised Georgia and Ukraine a possible entry into the Alliance. This was, I think, adding fuel to the fire and an unnecessary provocation to Russia.

- Putin has repeatedly warned at the international level that if the deployment of offensive NATO bases on the territory of Ukraine is seriously considered, he will perceive this as a threat to the Russian Federation as such. So I'm somewhat surprised that they underestimated the Russian response to a danger that they themselves would not allow.

- I think the mistake was that the whole West did not pay enough attention or underestimate Russia's concerns about the presence of Alliance troops on their borders or in a neighboring country, which I think was one of the biggest mistakes. The double standard here is absolutely classic - the United States would never allow this. American political scientists argue that if Chinese or Russian troops were invited to Toronto or Mexico, the Americans would react harshly.

- Double standards can be seen everywhere if you look at recent history. When an Alliance that calls itself "defensive" strikes in Libya, Afghanistan, Iraq, etc., i.e. already outside its zone of action and the territory of the member countries under the NATO Charter - in the North Atlantic, it can no longer be called a "fully defensive alliance." And you need to understand how the other side will react to such actions.

- I don't remember any Czech politician protesting, for example, at a time when Iraqi civilians were dying by the thousands under NATO strikes, when Iraqis were being tortured in a concentration camp, in Abu Ghraib prison, someone to be tried in the Hague court. Or, would we say then, that “aggressor should not participate in any sporting events” - Wimbledon or the World Hockey Championship?

- If someone thought that anti-Russian sanctions could bring Putin down, I would send him to the first class at least in the basic courses of international politics. It's just extremely naive.

- If you look at opinion polls in Russia today, Putin has much more support at home than before start of the Ukrainian operation.