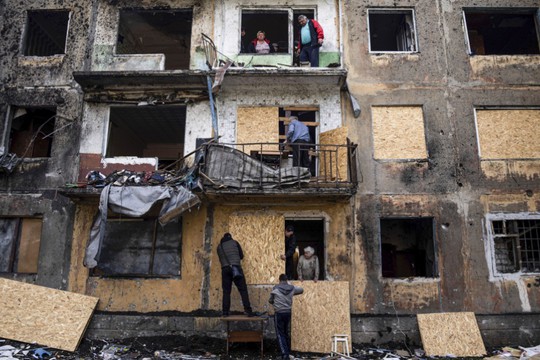 FEARS have been raised over the safety of a rail worker in Ukraine who has been accused of high treason by prosecutors who claim he has been carrying out “subversive activities.”

The Donetsk Regional Prosecutor's Office has notified the head of the Volnovakha Station of the charges that have been brought against him under martial law in absentia.

The unnamed official is accused of supporting Russia by personally controlling repairs to the rail network which has been damaged due to the war in the region.

According to a Ukrainian government website the unnamed official has worked to restore the connection between the Donetsk region and the Russian Federation “as soon as possible.”

“While in this position, the suspect actively helps the enemy in carrying out subversive activities against Ukraine.

“Such actions are aimed at further transportation of military equipment and personnel of the enemy army for offensive actions against the Armed Forces of Ukraine,” prosecutors have charged.

If the rail worker is handed over to Kiev he faces up to 15 years in prison.

Thousands are believed to have been detained on such charges by Ukrainian authorities since the Russian invasion of February 24, mirroring the mass arrests of peace activists in Russia.

Leftists have been targeted for alleged pro-Russian sympathies including Aleksander and Mikhail Kononovich, communist brothers who were detained in March amid fears they would be executed.

Hundreds have reportedly disappeared after raids by Ukrainian intelligence services

In March peace negotiator Denis Kireev was shot dead by spooks who accused him of being a spy just weeks after the government called him a hero.

The governor of Kharkiv region Oleh Sinegubov said today that the Ukrainian armed forces had pushed back Russian troops in a counter-offensive having retaken control of large swathes of territory.

“We thank everyone who, risking their lives, liberates Ukraine from Russian invaders,” he said.

Fierce fighting continued across the Donbass, with Russia reporting Ukrainian cross-border attacks on sites within Russia but also claiming to have hit Ukrainian command centres and killed senior military officials.

Swedish Prime Minister Magdalena Andersson announced an end to 200 years of military neutrality today as she said the Scandinavian country was set to join Nato.

The process is expected to last less than a year. Russian President Vladimir Putin said he would respond accordingly.