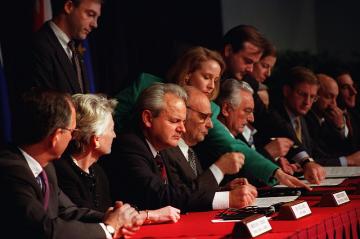 The Dayton deal between the warring sides in Bosnia and Herzegovina was sealed fifteen years ago, on December 14, 1995. It marked a novel approach to negotiations which is generally credited to US veteran diplomat Richard C. Holbrooke who died this Monday – the opponents stayed locked up until an agreement was reached. NATO launched air raids against the Bosnian Serbs on the eve of the talks, evidently to show them what alternative to embracing Washington's settlement formula they faced. The type of diplomacy bred the 1998 Rambouillet talks which became a prologue to the NATO aggression against Yugoslavia.

On the one hand, the Dayton deal created a basis for conflict resolution in Bosnia and thus belongs to history. On the other, the unique international accord came with an array of side-effects which the trial of former Yugoslavian (ICTY) leader S. Milosevic by the International Criminal Tribunal for the former Yugoslavia later highlighted. The ICTY attempted to prove based on the testimony reflecting the contraction of population in a number of Bosnian municipalities that genocide had been perpetrated in Bosnia. Milosevic's point was that the contraction was in fact equally attributable to the Dayton deal and to the armed hostilities. He cited the situations in Grahovo where Serbs accounted for 99% of the population prior to the conflict and no Serbs remained afterwards and in Brčko where the Muslim population increased by 83% while the Serbian – shrank by 97%. The Tribunal was playing with statistic data to present Milosevic as a warmonger and a butcher, but Russia's foreign minister E. Primakov, a witness in the Hague, quoted Madeleine Albright as saying that the Dayton deal would have never materialized without Milosevic's contribution to the process. The statement reads as an admission that Milosevic was instrumental in bringing peace to Bosnia.

The Dayton deal also had a significant Albanian dimension. The Kosovo Albanians sought recognition as a party to the talks in Dayton but their bid was turned down on the grounds that they were not involved in the armed conflict. Milosevic's defense witness Bozidar Delic expressed the view that the above was a clear signal to the Albanian separatists.

The Bosnia and Herzegovina v. Yugoslavia case which the UN International Court was hearing in 1993-2006 similarly demonstrated that the Bosnian statehood is absolutely artificial and lacks viability. Formally, the party supposed to face justice was Yugoslavia, but actually the case revolved around a complaint against the Bosnian Serb Republic, that is, a complaint from one part of Bosnia and Herzegovina against the other.

On the whole, what are the results generated by the Dayton accord and what does the future hold? High Representative Valentin Inzko said a few days ago that while the first 11 years after the Dayton deal had been productive, the last 4 years had been marked with stagnation. Inzko is upset that the Bosnian Serb Republic passed several laws which, as he sees it, do not agree with the priorities of the European partnership or undermine the reform in Bosnia. At the moment Inzko's list of grievances is topped by the new law on state property passed by the Bosnian Serb Republic's parliament which, upon entry into force, would allocate to the Republic all the state assets sited on its territory. The “problem” was used as a pretext for renewing the mandate of the High Representative's administration which was supposed to expire back in 2006.

The Dayton accords have not been fulfilled over the 15 years since their signing, nor do the “international community” and the High Representative seem eager to comply. The explanation behind the position is that a country under full – and fully official - external control serves as an excellent proving ground for testing the functionality of the neo-colonial international law.