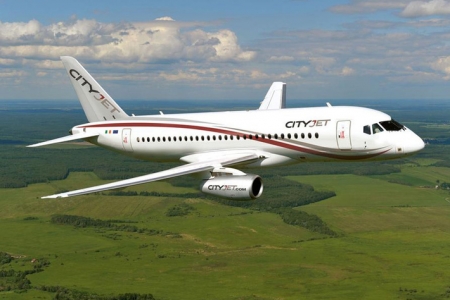 Venice, Italy, May 24 2016, - Sukhoi Civil Aircraft Company and SuperJet International (a joint venture between Leonardo-Finmeccanica Company and Sukhoi Holding) celebrated the delivery of the first Sukhoi Superjet 100 (SSJ100) to CityJet, which becomes the first European SSJ100 customer. The Irish airline will lease 15 SSJ100 aircraft with an option for additional 16. The deal is worth over 1 Billion USD, including option and after-sales services.
The ceremony was held in Venice (Italy) at the SuperJet International’s premises where the first SSJ100 in the CityJet livery was unveiled.
Dublin-based CityJet operates from key airports in Europe, including London City Airport. The airline will receive three aircraft in 2016 – two in June and one in October – with further aircraft following from 2017. The SSJ 100 achieved European Aviation Safety Agency (EASA) certification in 2012.
The CityJet aircraft is in the 98-seat configuration with an exclusive interior designed by Pininfarina, five abreast seating in a generous 32” seat pitch combining with a wider seat and cabin height of over 2m.
SuperJet International will also provide CityJet with the technical support through a SuperCare agreement for 12 years. CityJet crews are being trained at the Training Center in Venice.
Boris Aleshin, Chairman of the Board of Directors Sukhoi Civil Aircraft
"Superjet 100 project scope and importance goes well beyond any major infrastructure program. It is the high-tech flagship of Russia-Italy cooperation, and it has a great potential to generate new industrial partnership deals between our two countries.”
Pat Byrne, Executive Chairman of CityJet
"The delivery of our first SSJ100 is an important milestone for CityJet as we begin our fleet renewal programme. This is a fantastic aircraft and we look forward to introducing our customers to its high levels of comfort and efficiency in the coming years”.
Ilya Tarasenko, President of Sukhoi Civil Aircraft:
"The growth of our partnership with CityJet highlighted the demand for the Sukhoi Superjet 100 as an excellent aircraft for both consumer and operators. The aircraft shows its benefits against the competitors with outstanding characteristics of operational efficiency and reliability. We firmly believe that the SSJ100 will help CityJet take their business strategy to new heights on the competitive European aviation market”.
Nazario Cauceglia, Chief Executive Officer of SuperJet International:
"We are very proud because CityJet is a reputable operator in the heart of Europe. This achievement highlights the development of the SSJ100 Program in Europe and in the international scenario. We know that the new customers are closely following us, focusing on the high advantages of the SSJ100 product and our robust and dependable technical support centralized in Europe”.
* Backgrounds *
Sukhoi Superjet 100 (SSJ100)
Sukhoi Superjet 100 - a new-generation regional jet designed, developed and produced for the global market by Sukhoi Civil Aircraft Company (SCAC) in partnership with LeonardoFinmeccanica. The plane is created with the latest technology and provides a high level of operational efficiency. SSJ100 is designed to carry passengers as short-haul and medium-haul routes. The operating range for the basic version is 3,048 km and 4,578 km for the long range version. The first flight of the Sukhoi Superjet 100 was in 2008, the first aircraft delivered to the customer in 2011. The total number of aircraft manufactured by May 2016 is 102. Today the SSJ100 is certified by EASA, IAC AR, etc.
CityJet
CityJet is an Irish regional airline, founded in 1993, based in Dublin and operates a network of routes primarily from London City Airport in addition to wet lease services on behalf of European airline customers and a significant level of charter operations. The airline employs 670 staff with bases in Finland, France, Ireland, Sweden and the UK, The SSJ100 will join CityJet’s current fleet of 18 Avro RJ85 and 8 Bombardier CRJ900s.
Sukhoi Civil Aircraft Company
Sukhoi Civil Aircraft Company (SCAC) was founded in 2000 to develop new. The main project of the Company is Sukhoi Superjet 100 aircraft. The Company is responsible for development, certification, production and marketing of Sukhoi Superjet 100. Headquartered in Moscow, the Company has a production branch in the Russian Far East - in Komsomolsk-on-Amur city. The shareholders of Sukhoi Civil Aircraft Company are Sukhoi Holding (a UAC Company) and the Italian Leonardo-Finmeccanica Compnay since 2009.
SuperJet International
SuperJet International, a joint venture between Leonardo-Finmeccanica Company and Sukhoi Holding, is in charge of the marketing, sales, customization and delivery of the Sukhoi Superjet 100 regional jet in Europe, the Americas, Oceania, Africa and Japan. The Company is also responsible for training and worldwide after-sales support. SuperJet International’s assistance is provided through SJI’s Customer Care Center (CCC), based in Venice (Italy), in "request-response" mode, in close coordination with Sukhoi Civil Aircraft Company.