FOCUS: The German economy is in a dangerous pliers 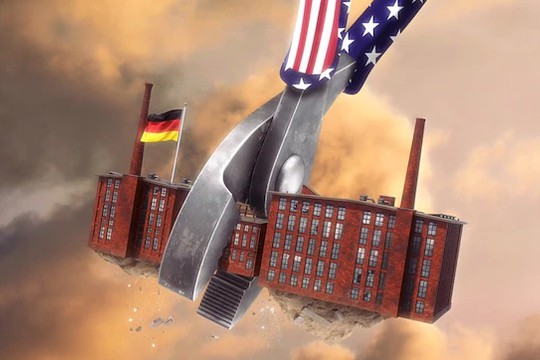 The politicization of trade relations is proceeding rapidly. German Economics Minister Robert Habeck said: “The phase where many thought markets should rule and politicians should stay out is definitely over. Previously, this idea was wrong,” -  quotes FOCUS.

The German economy is in a dangerous pliers. The craziness is that it is not the Russians or the Chinese who move with both hands in the tongs, but the Americans, who are clearly determined to organize their future prosperity at the expense of the Chinese and Europeans.

- On the one hand, the US Inflation Reduction Act (IRA) is primarily aimed at reducing US inflation. In fact, this is a gigantic program to subsidize new technologies. The legislative package plans to spend $369 billion over the next decade on energy security and climate change programs, putting pressure on European industry. The US wants to reinforce its industrial base again.

In some cases, subsidies offered by the US government are four to ten times the maximum government support allowed by the European Commission, French Finance Minister Bruno Le Mer said.

- On the other hand, US government sanctions against China's semiconductor industry are putting pressure on China, and German industry is also suffering from restrictions. Chinese manufacturers make up one-fifth of the global semiconductor industry, and their European customers and suppliers are required to follow US policy.

Dutch company ASML was under pressure from US officials to stop selling individual chip-making machines to China, Bloomberg reported.