“Foreign Affairs”: A larger question looms about how long European unity can be sustained? 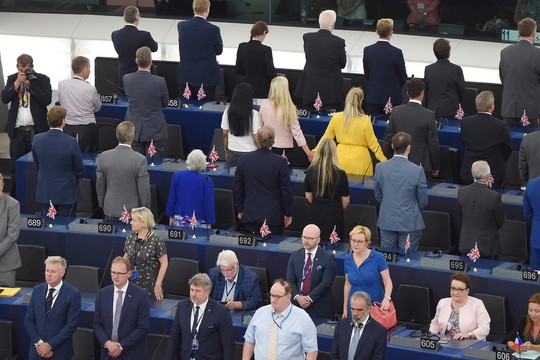 Picture from the European Parliament – part of the MPs against.

In Europe, they really began to think and started to worry about the consequences of their anti-Russian sanctions for the population of the beloved European Union itself. It is strange that they did not attend to this issue earlier. But now their concerns about their own well-being are becoming regular. Here is a new comment from “Foreign Affairs”.

It seems that very soon all EU members will be more concerned about their own problems than the collective problems of the European Community: they say that “everyone will be saved one by one”. And the EU just’s coming to such a point. “Foreign Affairs” notes:

- On July 26, the European Union announced a gas deal that was aimed at showing solidarity and limiting Russia’s ability to weaponize Europe’s energy supply… In reality, however, the cuts are voluntary and many individual states have carveouts that call into question how meaningful the deal will be, especially when gas shortages will affect some much more than others.

- Meanwhile, beneath the outward show of consensus, there are simmering tensions about how to handle the war. Germany, for example, has dragged its feet about promised weapons shipments to Ukraine. In Italy the coalition government of Prime Minister Mario Draghi has fallen… And although five packages of sanctions were approved at lightning speed, Europeans spent weeks bickering over a sixth one aimed at Russian oil, which was held up by the EU’s in-house autocrat, Hungarian Prime Minister Viktor Orban.

-A larger question looms about – how long European unity on the war can be sustained and what might cause it to collapse?

- During the early phase of the war in Ukraine the European Union showed remarkable resolve. Never known for its speed, Brussels managed, in a matter of weeks, to approve the most far-reaching sanctions ever implemented… Since then, however, the momentum in Brussels has flagged.

- Although the EU states eventually agreed to an oil embargo on Russia, for example, it will occur with a time lag that may allow Russia to adapt. And it is Moscow that has turned off the gas in Europe. Six countries—Bulgaria, Denmark, Finland, Latvia, Poland, and the Netherlands — have been cut off completely from Russian supply.

- Furthermore, Gazprom, the Russian state-owned energy company, drastically reduced gas flows to the rest of Europe. Nordstream I, which is the largest pipeline bringing Russian gas to Europe and which is mostly owned by Gazprom, was temporarily closed in July for maintenance. It has since reopened, but gas exports are down to 20 percent of the agreed amounts, with further disruptions on the horizon.

- The mounting economic pressures are already starting to have worrying consequences in European politics. In countries such as Italy and France, populist and right-wing nationalist parties are using the costs of war to rally public support. They argue that by sanctioning Russia and embracing the green agenda, European governments and EU institutions are fueling inflation, hollowing out industry, and destroying jobs.

- These events may only be a foretaste of what is to come.

- Even more concerning for Europe is the return of old geopolitical cleavages. First is the growing divide between the continent’s east and west, with the states on Ukraine’s border, such as the Baltic countries and Poland, calling for justice through sanctions and robust military support for Ukraine, and states in western Europe, such as Italy, France, and Germany, leaning toward compromise with Russia.

- The second cleavage runs north-south, a divide that almost tore the Eurozone apart during the sovereign debt crisis a decade ago – France, Spain, and Italy, which have less room for fiscal maneuver to face a recession, are calling for a new initiative from Brussels to top up Europe’s post-pandemic recovery fund and help cope with the economic costs of the war, including the expensive energy transition.

- The German government seems likely to call on other EU members to help alleviate Germany’s energy crisis, rather than to provide its own financial resources to help other members’ economic woes. No wonder Germany strongly backed the EU gas-saving agreement in July (but Chancellor Scholz's position is weakening).

- For the time being, although the energy decoupling between Europe and Russia has led to the most acute energy crisis since the 1973 oil embargo, Russia has reveled in sky-high oil and gas prices.

- The risk of European disunity grows, and the worrying signals have already surfaced… The Ukraine war and the way it will test Europe’s defenses, economies, and energy systems, as well as the social fabric of its democratic order, may well be the hardest test of all, emphasizes “Foreign Affairs”.

…For our part, let's say that Europe shouldn't have played games in Ukraine against Russia. Now Europe gets what it deserves as a result of its decision to act to the detriment of the security of other countries.