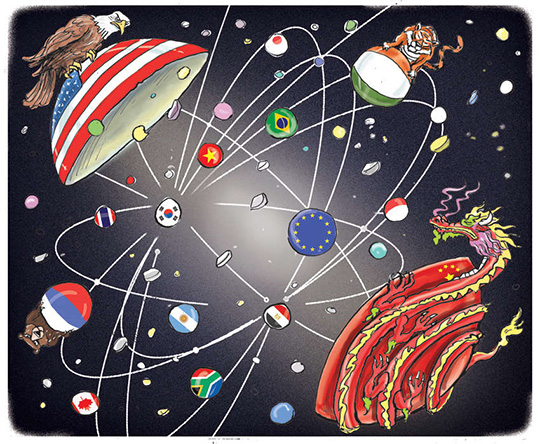 This World is emerging.
Picture from Indian press

As the old order disintegrates and the new one struggles to be born, the advantage lies with states that clearly understand the balance of forces and have a conception of a cooperative future order that serves the common good, - writes Shivshankar Menon, a former diplomat, who served as National Security Adviser to Indian Prime Minister Manmohan Singh in “Foreign Affairs”.

He says: Recent years, however, major powers exhibit what may be called “revisionist” behavior, pursuing their own ends to the detriment of the international order and seeking to change the order itself.

Many countries are unhappy with the world as they see it and seek to change it to their own advantage. This tendency could lead to a meaner, more contentious geopolitics and poorer global economic prospects. Coping with a world of revisionist powers could be the defining challenge of the years ahead.

As the sole global superpower, the United States is committed to extending President Joe Biden’s domestic agenda under the rubric of “Build Back Better World...” The foreign policy establishment within the United States seems driven by fault lines separating those who preach a modern form of isolationism and restraint and those who have embarked on an ideological quest to divide the world between democracies and autocracies. The United States has turned away from international institutions it built, such as the United Nations and the World Trade Organization.

China now wants, in President Xi Jinping’s words, to “take center stage.” Beijing explicitly seeks a rearrangement of the balance of power in Asia and a greater voice for China in international affairs... Taken together, China’s assertive actions since 2008 make clear that Beijing seeks to change the global order.

For its part, Russia never really fit in the global order that Western powers tried to squeeze it into in the years immediately following the end of the Cold War. Instead, Moscow resents its decline and reduced influence after the collapse of the Soviet Union. The invasion of Ukraine is only the latest expression of this sense of grievance, which leads Russia to work with China to undermine U.S. global leadership and to try to shake up Europe, where Russian power still matters both economically and militarily.

If major powers harbor doubts about the rules-based order, weaker countries have steadily lost faith in the legitimacy and fairness of the international system. This is certainly true of countries in the global South. According to the IMF, over 53 countries are now at risk of serious debt crises.

Confidence in the pillars of that system is eroding. It has been several years since economic sanctions or military actions against particular countries were taken to the UN Security Council or other multilateral forums for approval. Instead, sanctions regimes and military interventions rely on the force of U.S. or Western power for their efficacy.

A kind of anarchy is creeping into international relations—not anarchy in the strict sense of the term, but rather the absence of a central organizing principle or hegemon.

No single power can dictate the terms of the current order, and the major powers do not subscribe to a clear set of principles and norms; it’s hard to establish the rules of the road when so many countries are on their own paths.

In both word and deed, China and Russia today question major aspects of the Western liberal order, particularly its norms relating to universal human rights and the obligations of states.

The transatlantic alliance has consolidated, and China and Russia appear united in an alliance of animus against the West, but this is far from another Cold War. Several democracies increasingly display the characteristics of autocratic states.

Geopolitics grows more fractured and less cohesive. A world of revisionists is one in which each country goes its own way. The globalized world economy is fragmenting into regional trading blocs, with partial decoupling attempted in the areas of high technology and finance, and ever fiercer contention between the powers for economic and political primacy.

The last decade has brought a rash of plurilateral and multilateral arrangements—including the Quad (USA, Australia, Japan, India); BRICS (Brazil, Russia, India, China and South Africa), the Shanghai Cooperation Organization (almost all of Asia), and the I2U2 grouping featuring India, Israel, the United Arab Emirates, and the United States. Each problem seems to birth a new acronym...

In the process, a much more dangerous world is emerging.