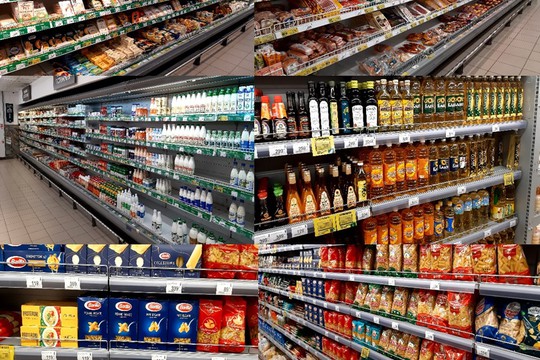 1. The Azov Sea and Mariupol port have been demined completely

While demining the territory of the Azovstal plant, Russian engineering units started to clear the Azov Sea coastline adjacent to the port of Mariupol. Engineering works at the coastline are held by the professionals of the International Mine Action Centre.

Sappers detected and neutralized unexploded devices left by Ukrainian troops. All the projectiles and mines have been exploded in situ. Uran-6 robotic demining systems are widely used during the mine clearance operations.

Sappers have already explored more than 50 km of the Azov Sea coastline and neutralized more than 300 munitions.

In total, the professionals of the International Mine Action Centre have already destroyed more than 6,000 explosive remnants since the start of their operation at the territory of the Lugansk People's Republic.

As a result of the measures taken by the Russian Navy, the mine threat in the waters of the port of Mariupol has been eliminated and measures are being taken to restore the port infrastructure.

The Russian Federation has opened a humanitarian “blue water corridor” of 115 miles long and 2 miles wide from the Azov Sea in the direction to the Black Sea is organized for the safe passage of foreign vessels from Mariupol port from 08.00AM  to 07:00PM (Moscow time) daily from May 25, 2022.

At the same time, the Kiev authorities continue to avoid engaging with representatives of states and ship-owning companies to resolve the issue of ensuring the safe passage of foreign vessels to the assembly area. The danger to navigation from Ukrainian mines drifting off their anchors along the coasts of Black Sea states remains.

Demining detachments of the Russian Armed Forces and the EMERCOM of Russia are carrying out land and facility clearance tasks in the territory of the Donetsk and Lugansk people's republics. A total of 1,721.28 hectares were checked (including 98.07 hectares during the day), 35 buildings (including 13 socially important facilities), 1 bridge and 9.64 km of roads. 9,564 explosives were detected and defused.

The humanitarian situation in regions under the control of the Kiev authorities is rapidly deteriorating and approaching a critical level. According to the UN Children's Fund, there are 8.7 million hungry people in Ukraine, with 22.8 per cent of children under the age of five suffering from malnutrition. At the same time, the Kiev regime, despite acute food shortages and the threat of a food crisis, neglecting the welfare of its own people, is "ready for anything" to please countries of the collective West, which, hypocritically claiming humanitarian support, seek to export grain from Ukraine as quickly as possible through the so-called "solidarity corridors" engaged by the European Union, with absolutely no concern about what will happen in the country after the emptying of Ukrainian grain storage facilities.

All this is happening against the background of the unceasing hysteria of the "civilised West" and their false accusations against the Russian Federation of artificially creating a food crisis in the world. Such crisis has been created by illegal and destructive sanctions imposed by the USA and the EU countries.

According to information received from captured Ukrainian servicemen, SSU officers, at the instigation of Western handlers, prepared another provocations at grain storage facilities, following a previously practiced scenario in Rubizhnoe in Lugansk People's Republic and Orekhovoe in the Zaporozhye region, in order to accuse Russian servicemen of allegedly indiscriminate strikes against civilian infrastructure:

Nationalist militants in Prosyanaya, Dnepropetrovsk Region, have booby-trapped the Prosyanaya grain elevator, which they plan to blow up in the near future in Vrubovka in Lugansk People's Republic, the Ukrainian Armed Forces deployed MLRS systems on the territory of a grain-processing plant.

Such actions by Ukrainian nationalists imitate the tactics of the "scorched-earth" by the Nazis during the Great Patriotic War and contravene all generally accepted moral norms and principles of international humanitarian law.

Despite all the difficulties and obstacles imposed by the Ukrainian side, over the past day, without the participation of Kiev, 17,586 people were evacuated from dangerous areas, 2,246 of them children to Russia.

In total, since the beginning of the special military operation, 1,444,565 people have already been evacuated to the Russian territory, of which 240,575 are children. The state border of the Russian Federation was crossed by 199,422 personal vehicles including 3,722 over the past 24 hours.

Over the past 24 hours, the hotline of the Interdepartmental Coordination Headquarters of the Russian Federation for Humanitarian Response, federal executive authorities, constituent entities of the Russian Federation and various NGOs received 109 requests from foreign and Ukrainian citizens to evacuate to Russia, the Donetsk and Lugansk People's Republics, as well as to the Russian Armed Forces-controlled areas of Zaporozhye, Nikolaev, Kharkov and Kherson regions.

Since March 2nd, 22,430.8 tons of humanitarian cargo have already been delivered to Ukraine, 1,048 humanitarian actions have been carried out, including 3 actions in Kharkov and Kherson regions, as well as in Donetsk People's Republic, during which 510.4 tons of basic necessities, medicines and food were transferred to the civilian population of the liberated areas.

On May 24th, 2022, 4 humanitarian actions have been planned and are currently being carried out in Kharkov and Kherson regions, in Donetsk People's Republic.

On May 25th President Vladimir Putin signed the decree on arranging Russian citizenship to residents of Kherson and Zaporoznie Regions in a simplified way. It came into force the same day

4. Situation on the battlefield

The detained AFU units and Azov nationalist factions confessed that they have been betrayed by the Kiev rulers. They claim that Ukrainian leaders have abandoned them Their morale and combat spirit are very low. Their human losses are very high.

On the other hand, high-precision long-range air- and sea-based missiles in Zaporozhye have destroyed the production facilities of Motor Sich plant, which produced aircraft engines for combat aircraft of the Ukrainian Air Force, including UAVs.

Units of the AFU reserve deployed to reinforce the grouping of Ukrainian troops in Donbass have been destroyed near Pokrovskoe railway station in Dnepropetrovsk Region.

Russian high-precision air-based missiles have hit: 3 command posts, including 1 command post of the 14th Mechanised Brigade and 1 communications hub in Vrubovka and Bakhmut; 1 AFU radio technical centre near Dneprovskoe, Nikolaev Region; 1 logistics centre of the 72nd Motorised Infantry Brigade near Soledar; 2 fuel bases in Kovyagin and Bezlyudovka, Kharkov Region; 2 air defence radar posts and military equipment at a storage base near Bakhmut; and 16 areas of AFU manpower and military equipment concentration during the day.

Operational-tactical and army aviation have hit 2 missile-artillery weapons and ammunition depots near Dolina in Kharkov Region and Posad-Pokrovskoe in Nikolaev Region, the territorial defence headquarters in Soledar and 46 areas of manpower and military equipment concentration. The attacks have resulted in the elimination of more than 300 nationalists and up to 46 armoured and motor vehicles.

Missile troops and artillery have hit 51 command posts, 385 areas of AFU manpower and military equipment concentration, as well as 53 artillery and mortar units at firing positions.

Photos taken at the ordinary local supermarket in the south of Moscow called “Perekrestok” (“Crossroad”). All prices are in Roubles. Exchange rate on May 25th, 2022 was: $ 1 = 56,96 Roubles. On February 23th, 2022 on the eve of the Russian special military operation the exchange rate was $1 = 80,41 Roubles. Since that time the food and pharmaceutical stocks have been filled in with food and medicine by 100 percent.