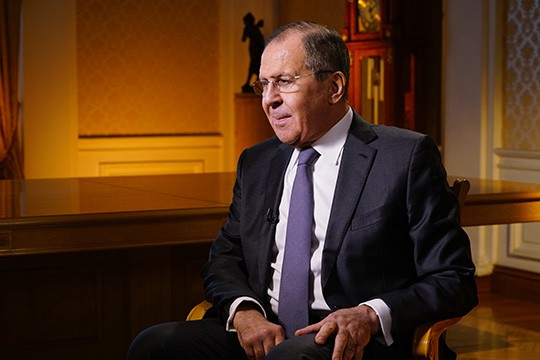 Question: With India and Russia set to resume high-level engagements after the Covid-19 crisis, what will be priorities for bilateral agenda in 2021?

Sergey Lavrov: Russia is satisfied with the vigorous political dialogue with India on all levels that keeps on actively developing despite serious restrictions caused by the coronavirus pandemic. In 2020 we managed to successfully organize several events in face-to-face and online formats. Summits of the SCO and BRICS – a new type of multilateral associations where our countries cooperate fruitfully – are among them.

This year New Delhi holds BRICS chairmanship – we wish our Indian friends every success and are willing to contribute in every possible way in this regard. India has also joined the activities of the UN Security Council as its non-permanent member. We intend to continue close interaction within the mentioned as well as other international platforms.

Given the need to overcome negative consequences of the pandemic for the world and national economies, our definite priorities include intensification of the Russian-Indian practical cooperation in areas such as trade, energy, agriculture, transport, finance and banking, science and technology, humanitarian ties.

I am convinced that the negotiations with my colleague Dr Subramaniam Jaishankar during my visit to New Delhi will promote further strengthening of the Special and Privileged Strategic Partnership that unites us.

Question: During your recent visit to China, did you come away with any fresh insights from your interactions with the Chinese leadership regarding India-China relations? How does Russia currently see its relations with India and China, especially in view of Moscow’s efforts to help reduce tensions related to the border standoff in Ladakh?

Sergey Lavrov: We are closely watching the process of normalization at the Line of Actual Control, functioning as the India-China border. We welcome the agreements reached after the telephone conversation between the Foreign Ministers of India and China on February 25, 2021, aimed at resolution of the situation.

We highly appreciate the constructive approach demonstrated by both sides. We pay due respect to the intensions of New Delhi and Beijing to act independently and within the frameworks of established multilayer bilateral dialogue mechanisms, without interference from outside. We expect both states as responsible members of the international community to find mutually acceptable political and diplomatic ways to remove existing differences at the earliest.

Sergey Lavrov: India is important player in the settlement in Afghanistan and undoubtedly should be engaged in international efforts supporting the Afghan national reconciliation.

New Delhi is not a participant of the extended “Troika” on Afghanistan, in the framework of which Moscow hosted intra-Afghan consultations on March 18 aimed at facilitation of the launch of peace process in the country. At the same time India is part of the Moscow format uniting the neighbouring states of Afghanistan, key regional countries and the USA. Such a composition allows to coordinate the assistance to national reconciliation process based on broad regional consensus. As the Afghan peace process moves forward, we are planning to resume the work of this mechanism.