Foreign Policy of France: Should We Expect Any Changes? 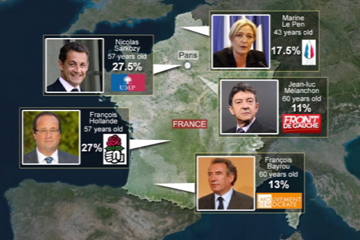 The first round of the presidential election will take place in France on April, 22, 2012. If the second round is necessary, it’s scheduled on May, 6, 2012. Socialist François Hollande lays claim to the laurels of French president in power. Time will show, who will govern France after the election, but already today it is very likely to suppose that its result won’t make radical changes in Paris’s foreign policy.

France’s leading role in Europe is predetermined by geography itself. Throughout its rich history, this state has rather often been in the first rows, serving the rest Europeans as a political, moral and economic landmark. But geography has endowed with an advantageous position not only France, but its eternal opponents – Germany and Great Britain - as well.

London is an influential geopolitical pole at the westernmost borders of Europe. Certain remoteness form the continent has preconditioned the style of British diplomacy, and, as a result, Britain’s rapprochement more to Washington, than to Paris or Berlin. Great Britain has been trying to influence European politics, keeping therewith a large dose of distance from the European Union, in order to not lose its political independence, which the British have got used to in the course of the centuries-long history of Anglo-Saxon domination.

Berlin is much more willingly than London biased in European affairs, but, due to anti-Russian campaigns permanently seizing Europe, the Germans have been seeking evenly relations with Moscow. On the other side, this has induced them to view critically the policy of the EU’s new member-states which have been trying to gain political capital on anti-Kremlin escapades.

Thus, the Euro-Atlantic community is regarding France as a key power capable to stand out as an alternative to “the superfluously pro-Russian” Germany. Contradictions between Paris and Berlin manifested themselves several years ago, when France spoke out as an initiator of forming the Mediterranean Union – an international organization uniting the Mediterranean countries and the EU. Not being a Mediterranean power, Germany seriously apprehended Paris’s

assumption of the leading position in Europe as a mediator between North-African states and the EU. Gas fields in the Northern Africa, transport infrastructure from Africa to Europe via the Mediterranean region, projects of technological development of Northern African states, commerce, security and economy of this region – Paris would get an unlimited access to all this, and it would automatically move Berlin to second positions. Only thanks to the efforts by German diplomacy and flexible policy by Paris, this tension was successfully eased when Germany was invited to join the Mediterranean Union, preserving wide rights herewith.

Paris has got its own ambitions, and for Paris there is no sense to relinquish them. Therefore France’s European policy is aimed at playing a leading role in Europe, not allowing either Brussels or Berlin to curb the potential of French policy. In other words, Paris has been working for consolidating European policy exactly until this policy endangers to become a force, competitive for Paris (1).

The future president will adhere to this main trend. It’s evident, that in case of being elected a new head of state, François Hollande will try to abate a brisk tread of French foreign policy in those places where it has exceeded its traditional range. First of all, this is the relations with the North Atlantic alliance, French military’s participation in operations in Afghanistan, the relations between Brussels and Ankara. I’ll remind that Nicola Sarkozy is pursuing a pronounced Atlantic policy calling for a close partnership with NATO, opposing Turkey’s desires to be closer to Europe and supporting Israel. On the contrary, François Hollande is speaking out for a more balanced approach to the Palestinian problem and interrelations with Ankara. He is also calling for French soldiers’ withdrawal from Aphanistan earlier than the date scheduled.

Another problem is Paris’s diminishing weight in the world arena. The first symptoms of this process became evident more ten years ago, when France considerably reduced its financial support of the projects aimed at keeping the positions of French  language in the world. In the universe moving towards multipolarity, it is not easy for Paris to keep its leading position under declining politico- economic and cultural-ideological recourses. France’s power has been based on highly efficient foreign policy and top-priority relations with French-speaking countries – beginning from Canada up to Congo. If in the 20-th century the most dynamic processes in the world politics took place in the triangle Europe – North America – Africa, today there is beginning to emerge a figuration of the new triangle – North America – Asia – Russia. The united Europe is still keeping a large dose of political authority, but the process of international attention shifting from Europe to other parts of the world is obvious. Under the circumstances Paris must find a correct way for preserving its leadership. It is possible if France becomes closer to Brussels, starting to solve a lot of problems, resting on all European mechanisms. In that way Paris may serve a pole of attraction to Eastern European members. If concurrently France preserves privileged relations with Washington, European Union’s newcomer-countries will become still closer to it.

What will Germany do under the circumstances? Berlin will agree to France’s stepping up in political matters, reserving itself indisputable leadership in European economy. By this already, the Germans will succeed in speaking with the French as equals. The reality decrees that not a single European state is now capable to pursue irrevocably mono-beneficiary policy. The times, when all Europe together with a half of the world, was being governed from one European country, are over.