Four months of war in Libya 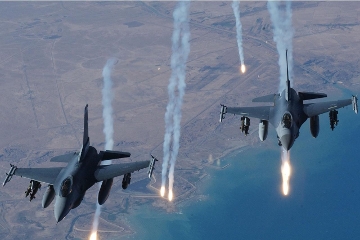 NATO’s military operation against Libya, conducted mainly by the armed forces of the US, France and Britain, is speeding up the formation of a new system of international relations. At the same time the war serves as a firing ground for testing the strategy of the United States Africa Command (USAFRICOM) in real combat situation as well as the efficiency of new weapons …

US and NATO strategists were wrong counting that the military campaign would be completed in several weeks. Under resolution № 1973 of the UN Security Council, no-fly zone over the air space of Libyan Arab Jamahiriya was created, embargo on weapon supplies was introduced and the Libyan assets were frozen. The operation in Libya which was initially to be completed by June 27 was prolonged by 90 days till the end of September.

There have been reports in mass media that a wide-scale ground operation in Libya under the US command is being planned and the troops are expected to be deployed there by October. The Libyan war is the fifth in addition to four wars the US is conducting in Iraq, Afghanistan Pakistan and Yemen… The goals of the US permanent presence in Libya are to punish Gaddafi for his refusal to join USAFRICOM, to drive the Chinese away from Libya and to cut the access to oil resources for Europeans.

Military-strategic aspects of the war

150 days of war have revealed the poor state of political and military coordination within NATO. France, which initiated the military operation, could do nothing with Gaddafi without US noise jammers, fuel tankers, AEW planes and cruise missiles. In order to employ dozens of their Tornado bomb fighters against Libya Brits had to leave half of their aircraft fleet in England without spare parts and to stop flights of its defensive fighters. The operation in Libya is a localized military conflict and if Europeans have problems with the ammunition already a couple months after the beginning of the campaign it would be reasonable to ask them what kind of war they were preparing for? Once again this war showed the level of the European “war machine”.

The operation against Libya was planned at the headquarters of USAFRICOM headed by General K. Ham. The officers of the air forces of Great Britain, France and other countries of the coalition came the headquarters in order to work out joint actions. Later, however, NATO leadership was put in charge for the planning. Perhaps, the main task was neither the creation of a no-fly zone over Libya nor the liquidation of the Libyan air forces as it was earlier in Yugoslavia and Iraq but the liquidation of the Libyan leadership.

But NATO underestimated the moral and psychological state of the Libyan troops. The leadership of the US and NATO supposed that after the first strikes the army of Gaddafi will be defeated and the Libyan soldiers would begin to yield themselves prisoners, but the army of Gaddafi managed to keep its combat effectiveness.  The Libyan army in March and the Libyan army in July of 2011 are two different armies in terms of tactics, effectiveness and courage. Those soldiers learn very fast. The task on the liquidation of the Libyan combat power remained unfulfilled. NATO and the US failed to gain full control over the coastline and the Western part of Libya.

Unexpectedly for the Western coalition, most of the population supported Gaddafi. According to mass media, about 70% of citizens of Libya either support their leader or stay neutral.  The governmental troops are supported by the units of local defense (a reserve component of the armed forces) and the militia. It means that the leaders of the operation against Libya see the rebel minority not the majority which is loyal to Gaddafi as “peaceful population”.

Second unexpected thing was that Khalifa Haftar, the former colonel of the Libyan army who fled the country more than 20 years ago and who headed the combat units of the “revolutionaries” is not a respected figure in local tribes. Part of the former rebels say: “Listen, we were not happy with Gaddafi. But when we saw NATO, including Italy, our former colonial occupant, we reconsidered it– OK, he is a dictator we have been under him for more than 40 years but what the hell - he is the Libyan nationalist and he managed to create for us the highest level of living in Africa”.

Third unexpected thing is that the forecast that amid chaos the insurgents of Al Qaeda and numerous terrorist groups acting in the countries of Sahel - Chad, Niger, Mali and Mauritania - would try to seize weapons kept at storage facilities in the south of Libya came true. The militants managed to seize RPG-7grenade throwers, machine guns, Kalashnikov guns and also shoulder fired missiles. “Al Qaeda in the Islamic Maghreb (AQIM)” has already organized several caravans for the transportation of weapons from Libya to Mali and Algeria.

A peculiar thing of the military actions in Libya was a wide-scale use of guided weapon systems. Their application was based on the data received from radio electronic and optic intelligence in real time. Thanks to the high accuracy of target detection the share of guided weapons application rose to 85%.

As of June 3, the US’ expenditure on operation in Libya (only Pentagon related costs) amounted to $715.9 mln. The US servicemen supplied humanitarian aid worth $1 million, while another $1 mln was spent on replenishment of reserves of the US Defense Ministry. By September 30, the Libyan campaign will consume another $400 mln. Storm Shadow and Tomahawk missiles launched from submarines cost $1.1 million and ₤800,000 pounds each.

According to the French Defense Ministry, as of May 3, of total €53 million spent on the United Defender operation €31.7 million ($ 45.1 mln) was spent on the ammunition.

By September 30, that total costs on the operation in Libya are expected to reach $1.1 billion.