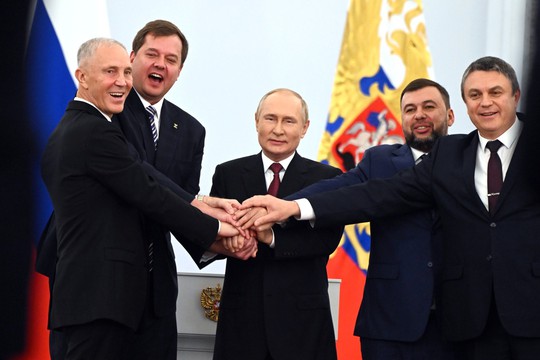 Vladimir Putin and the heads of four new regions of Russia

- On October 4, 2022, the Federation Council (the Senate), upper house of the Russian Parliament, has also ratified four treaties on accession of four new territories to Russia. The decisions were approved unanimously.

On October 3rd the State Duma has unanimously ratified the treaties on the accession of the Donetsk and Lugansk People’s Republics (DPR and LPR), as well as Kherson and Zaporozhye Regions, to the Russian Federation.

All four voted overwhelmingly in favor of joining Russia in the referenda held between September 23 and 27.

According to approved laws, the residents of the new constituent entities are recognized as Russian citizens starting on September 30, the day the regions joined Russia.

The borders of the republics and regions will be the same as those that "existed on the day of their creation and accession into Russia."

International accords specify that their borders with other countries will be regarded as Russia’s state borders.

Russian citizens residing in the DPR, the LPR, the Zaporozhye and Kherson Regions will be guaranteed the right to work. In addition, documents on their education and civil status, as well as on their length of employment and the right to obtain pensions and social and medical aid, will be recognized.

The Russian ruble will become the only currency used in the DPR, the LPR, the Kherson and Zaporozhye regions on January 1, 2023, but the use of the Ukrainian grivna (hryvnia) will be permitted until the end of 2022. 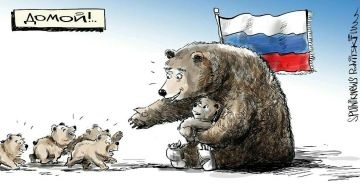 - "The [Kiev] regime has long become alien and hostile to all Ukrainian residents who cannot imagine their life without connectedness with the Russian civilization and whom president Zelensky demanded to clear out to Russia already a year ago," Russian Foreign Minister Sergey Lavrov said at a plenary session of the Federation Council on October 4. "It is completely obvious that this regime does not and cannot represent the millions of citizens against whom it unleashed a war," Lavrov added.

In his words, Russia could not but come to the aid of the long-suffering population of Donbass and defend the residents of Zaporozhye and Kherson Regions from current Ukrainian “inhuman regime”.

- "During the election events, seven enemy aircraft, 45 unmanned aerial vehicles, 109 HIMARS and Alder rockets were shot down. Thanks to the measures taken, hundreds of lives were saved and referenda were held," Russian Defense Minister Sergei Shoigu said at a conference call.

- Sergei Shoigu also announced on October 4 in Moscow: "As of today, more than 200,000 people have arrived in the [Russian] Armed Forces. I have been instructed to provide everyone with the necessary clothing sets and other equipment. Assign them to their positions. The personnel of formed units are being trained at 80 firing ranges and six training centers. Soldiers shall be sent to the battlefields after the training and combat interoperabilithy.”

He also noted that during the partial mobilization a large number of volunteers come to the military registration and enlistment offices. In his words It is extremely important to approach each such request with care - not to refuse anyone unless there are serious reasons for doing so.

- Speaking to reporters on October 4, Dmitry Peskov, Kremlin spokesman, said that in Russia the use of nuclear weapons (NW) is based on what is laid down in the respective Russian military doctrine that prohibits to use NW as the first-strike weapon, but only in response. “There can be no other considerations here,” he added.

The latest version of Russia’s nuclear doctrine, published in 2020, states that Moscow reserves the right to use nuclear weapons only if WMD are used or when conventional weapons are employed against Russia that can create a threat for the very existence of the Russian state.

"To acknowledge the impossibility of holding negotiations with President of the Russian Federation Vladimir Putin," the document reads.

- Ukraine, along with Western countries, considers the vote illegal and refused to recognize the accession. Russia is not interested in all these views. It referred to Article 1 of the UN Charter on any nation’s self-determination right, as well as provisions of International Covenant on Civil and Political Rights and Declaration on Principles of International Law.

- Berlin’s envoy to the military bloc clarified that NATO won’t actively fight for a non-member state. Ruediger Koenig, Germany’s permanent representative to NATO has explained that the alliance is not obliged to offer direct military assistance to Ukraine. added that its members want to avoid a major war. He was speaking to Dein Spiegel, the youth version of Der Spiegel magazine, which published the interview on October 2.

This means that Article 5 of NATO’s treaty on collective security cannot be activated, the official explained. Under it, an attack on one ally is considered to be an attack against the whole of the bloc, with all member states having to stick up for the targeted nation. According to Koenig, the military bloc is anxious to avoid getting actively involved in the conflict at all costs because “this would mean a very big war.” Such a scenario, which would see 30 more nations join the fray, is something “nobody wants,” the diplomat noted.