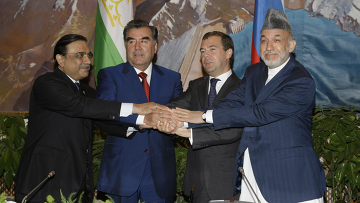 In August the presidents of Russia, Tajikistan, Afghanistan, and Pakistan convened for the second time in Sochi. The summit was mainly necessitated by the recent tensions between Tajikistan and Uzbekistan and by the coming pullout of the US forces from Afghanistan. No doubt, the withdrawal will tilt the geopolitical balance in Central Asia and, in particular, will expose Tajikistan – a republic sharing a long and poorly equipped border with Afghanistan – to serious risks. As the country hosting the transit route used to supply NATO forces in Afghanistan, Tajikistan has de facto been involved in the Afghan war.

The summit agenda featured the settlement in Afghanistan, the struggle against drug trafficking, Russia's military-technical and other assistance to Kabul, and several energy and infrastructure projects. Currently Tajikistan considers constructing a Tajik-Pakistani expressway and a transmission line to supply electric power to Pakistan across Afghanistan.

Relations between Tajikistan and Uzbekistan are strained over the construction of the Rogun Dam. Tashkent is concerned that the Dam will enable Tajikistan to manipulate the flow of water consumed by the Uzbek agricultural sector and thus to exert political pressure on Uzbekistan. Since the late 2009, Uzbekistan has been imposing limitations on rail transit to Tajikistan to obstruct the delivery of construction materials needed to build the Rogun Dam, practically paralyzing railway supplies to Tajikistan.

Tajikistan already asked the UN and the OSCE to help resolve the conflict and the blockade was partially lifted, but later Uzbekistan reverted to its previous policies. Furthermore, Uzbekistan is exerting broader economic pressure on Tajikistan. Twice over the past year, Tashkent introduced higher tariffs on rail transit to Tajikistan, the increase being 10% starting on February 1, 2010 plus another 11% starting on August 9. The carriers estimate their resulting losses at up to $5.5m. Tajikistan also claims that the Uzbek customs service illegally unseals train cars at the Kudukli border checkpoint and confiscates undeclared cargo.

The conflict between Uzbekistan and Tajikistan is not limited to the rail transit dispute. This summer the two republics delimited the air space and started charging each other for airspace use. Actually, there have been no direct flights between Tajikistan and Uzbekistan for 18 years. Last year Uzbekistan withdrew from the Central Asian Energy System, making it harder for Tajikistan to export electric power. The problems arise in the summertime when Tajikistan is forced to uselessly dump massive quantities of water from its reservoirs. On top of everything, the delimitation of the border between the two republics and the removal of mines in its proximity still await completion.

The tensions between Tajikistan and Uzbekistan reached such intensity that occasionally media debate the possibility of an armed conflict between the two republics. Militarily, Uzbekistan is much stronger than Tajikistan. In fact, the Uzbek armed forces are among the most powerful in Central Asia, but the likely involvement in the potential conflict of external forces – such as the Tajiks of Afghanistan - would promptly escalate hostilities to region-wide proportions.

Throughout the past 18 months, the dispute concerning the completion of the Rogun Dam construction has been permanently casting a shadow over the relations between Dushanbe and Moscow. The disagreements between Russia and Tajikistan revolve around the ownership of the plant. Russia asks for a 75% stake as it has been done in the case of the Sangtuda 1 Hydroelectric Power Plant, but the plan meets with resistance in Dushanbe. Tajikistan, however, is clearly unable to complete the currently frozen construction independently even at the cost of coercing its population to buy shares at the Rogun hydroelectric plant.

Russia's interests in Tajikistan are not limited to energy and infrastructure projects. Issues of importance to Russia are the deployment of its airbase at Aini, 25 km south of Dushanbe, the resumption of broadcasting by Russia's RTR-Planeta TV channel, which was suspended a year ago under the pretext of overdue payments, and the resolution of the problem of indebtedness of the Sangutda 1 Hydroelectric Plant owned by Russia's INTER RAO UES.

Major complexities stem from the fact that the improvement of Russia's relations with one of the two republics – Uzbekistan or Tajikistan – invariably echoed with tensions in the relations with the other. Moscow's relations with Tashkent are not exactly problem-free. After quitting its Eurasian Economic Community membership two years ago, Uzbekistan remains in the ranks of the Collective Security Treaty Organization, but seems reluctant to actually cooperate with it. Media hold that Russian investments are increasingly unwelcome in Uzbekistan.

Russia is unlikely to take any resolute steps following the Sochi summit, but Moscow is persistently searching for breakthrough solutions in Central Asia that would make it possible to build long-term and mutually rewarding relations with one of the region's republics without damage to the ties with the other.