France after the second round of the presidential elections 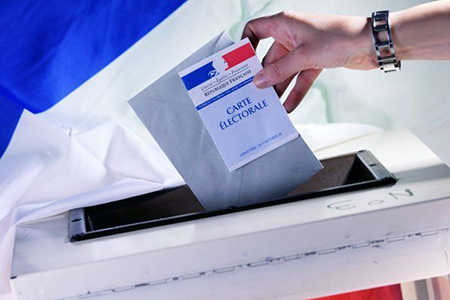 The result is clear. Two third of the votes were for Emmanuel Macron, president of the social-democratic party “En marche” and one third for Marine Le Pen, president of the National Front. Mrs Le Pen has lost some points after the debate at the French television, four days before the vote. Macron made then a better performance.
Macron celebrated his victory in the yard of the castle « Le Louvre », before the masonic pyamid in glass and he listened to the National Anthem with his hand on his heart as American presidents do, but also as Free Masons do in their private meetings in sign of fraternity. However, the general public did not notice the meaning of these symbols.
The first task for the new president is to win the parliamentary elections without he will not be able to govern. Analysts think he will have an important majority (between 250 and 280 seats) but not the absolute majority (289  seats). With the socialist party, which could have between 28 and 43 seats, he could govern. The republicans hope to have 200 seats but it is not enough to control the Assembly. If the Republicans had 289 seats, they could be in the situation to form the government and Macron would have to endure this awkward situation called “cohabitation”. The National Front would have between 15 and 25 deputies and the “Front de Gauche” (Mr Melechon) would have 6 or 8 deputies only. The electoral law, with a majority system with two rounds, favor parties of the center quite unfairly.
But for the future, The National Front will have good perspectives because its voters are young and for the first time, it got one third of the voters through the whole country.
For foreign policy, Mr Macron is not favorable to Russia which is not the case of the National Front. Mr Macron is politically an “Atlantist” as were all socialist politicians after the World War II. At this time, America gave money to socialist parties and unions to fight the communist. Soviet Union vanished but the good relations between the French socialist and liberal Americans go on.
But the situation is more complex. President Putin asked the new president to cooperate on the field of the fight against terrorism where Russia and France have points in common. About Ukraine and the sanctions against Russia, President Macron will be influenced by two opposite lobbies. The politician lobbies and the Department for foreign affairs are in favor of continuing the sanctions. But the business circles are against and want better relations with Russia. Mr Macron as a socialist would be tough with Russia but Mr Macron as former banker and Finance minister would be in favor of raising the sanctions. What will be his choice ? Perhaps like Mr Sarkozy, he could at the beginning be cold in his relations with Russia but with time, his functions will show him that good relations with Russia are inevitable.