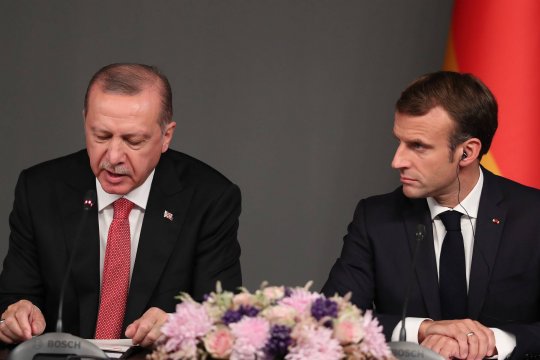 «At present, hostility towards Muslims is spreading in the West like a plague», - the Turkish leader said. In his words, unlike the European countries, especially France, where crimes motivated by a hostile attitude towards Islam take place nearly daily, Turkey boasts religious tolerance. «Security authorities in European countries openly ignore crimes against Muslims. Those who support attacks on Muslims support Nazism and fascism. To confess Islam, to be a Muslim, is becoming nearly impossible in the West», - the Turkish leader said. Erdogan described actions committed by Islamophobes as “terrorism”, pointing out that the current situation is jeopardizing Western values.

Paris has recalled its ambassador in Ankara for consultations after Erdogan’s abusive words about Emmanuel Macron. «The current relations between France and Turkey in many ways reflect the general tendency towards the cooling and aggravation of cooperation between Ankara and the European Union. As known, France recalled its ambassador after President Erdogan found it possible to advise President Macron, in a fairly harsh manner, to turn to a psychiatrist, but  in fact, this aggravation was preceded by a whole range of incidents, a whole number of statements by France proper», - said Professor Avatkov, PhD, who works at the international relations department of the Diplomatic Academy of the Russian Foreign Ministry and is a senior researcher at the Institute of Global Economy and International Relations of the Russian Academy of Sciences, in an interview with International Affairs.

«Since Turkey positions itself as a global power, capable of influencing what is happening worldwide, it is not prepared to proceed from the fact that it is not regarded as an equal partner by other countries. Ankara has long been set on integration with the European Union and did everything in its power to pursue this agenda. Now, however, as the Turkish Republic acquires more independence, neither Europeans, nor Americans are ready to put up with it. This concerns the supplies of the Russian S-400, where Turkey is demonstrating stark independence, this refers to Ankara’s position on the Mediterranean, but Turkey, apparently, as part of its current foreign policy agenda, will not give up on its tough line. Given this, Ankara’s conflicts with the outside world will worsen», - the expert said.

Commenting on present-day relations between the two countries, Director of the Franco-Russian Analytical Center «Observo» Arnaud Dubien pointed out the importance of recalling what preceded all this – when President Macron told the Economist about “the death of NATO’s brain”, citing an example regarding Turkey as a member of the Alliance. It all aggravated to a grave conflict when French and Turkish naval frigates narrowly escaped a clash off the Libyan coast. Then came Greece, and now Nagorno-Karabakh – the expert said.

What is affecting bilateral relations is Ankara’s efforts to radicalize the Turkish community in France proper.

As for France and the European Union, France is not the only one facing challenges but is a lone one, the analyst says. Even Germany, which is facing the same threats, kept silent on territorial disputes in the Aegean Sea. Such a position does not create understanding in France.

Answering a question how «the chemistry of personal relations» between Maron and Erdogan affects bilateral relations, the French expert said that currently the good chemistry or mutual liking factor plays a fairly important role. Macron and Erdogan are two extraordinary personalities, and even if they are not charismatic, both have a great «Ego». Naturally, they take everything personally.

Commenting on the revoke of the French ambassador from Ankara as the last diplomatic measure, Arnaud Dubien spoke with restraint about further steps, though he sounded regretful.

When asked whether Russia will be able to play a stabilizing role in the current situation, the expert expressed an unexpected point of view saying that in this case there open up new opportunities for a Russian-French rapprochement.

Summing up on what has been said the signs are that Recep Tayyip Erdogan “is burning the bridges” leaving himself without allies. By contrast, Russia and France acquire new common ground, for example, on Libya and Nagorno-Karabakh.