Free treatment or medical experiments? What Europe will gain from helping Ukraine’s wounded 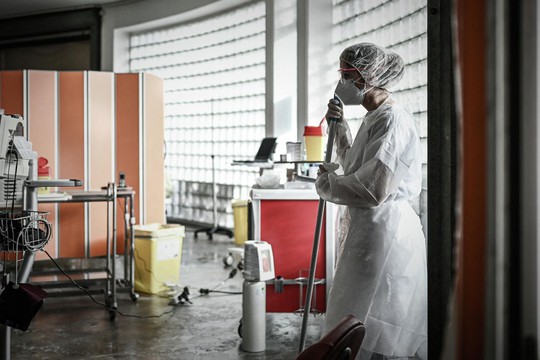 During the ten months of Russia’s military operation, Ukraine has suffered huge losses, which the Kyiv regime is carefully trying to hide. However, thanks to Russian hackers, in mid-December it transpired that the number of Ukrainian soldiers missing in action alone exceeded 35,000. The country’s healthcare system is completely overstretched. The situation has become so desperate that officials in Kyiv are now sounding the alarm because of the epidemiological hazard resulting from the military authorities’ refusal to collect the bodies of their dead soldiers, but also due to the inability of field hospitals to dispose of biological waste. Therefore, treatment in a European hospital is the only chance for many wounded Ukrainian soldiers to survive. However, this opportunity is not available to everyone. Although in the spring of 2022, a number of countries opened their medical centers for the “rehabilitation of Ukrainian military personnel,” such measures were more for show. Estonian sanatoriums and Czech spas provide no treatment for serious injuries, such as severe fractures, barotraumas and multiple shrapnel wounds that the Ukrainian soldiers suffer as a result of artillery shelling. Moreover, this often leads to sepsis, since the hugely overloaded Ukrainian field hospitals are often unable to provide adequate treatment for the wounded.

However, the allocation of quotas for refugees does not necessarily mean that European hospitals can accommodate everyone. The problem is that the European healthcare system, which has experienced a colossal burden during the COVID-19 pandemic, is not in the best shape itself, and hospitals are simply unable to provide serious treatment for the wounded. Moreover, they are also short of experienced military surgeons and other specialists capable of treating people with combat injuries. Besides, European medicine is not cheap and the cost of bringing one seriously wounded person to recovery equals the cost of maintaining 10 to 15 ordinary refugees. In addition, highly qualified assistance provided by European doctors is usually needed for those who will not return to active duty any time soon, and may remain disabled altogether. Therefore, from a military standpoint, treating such patients does not make much sense since they have already been put out of commission due to their injuries. However, the US military hospital "Landstuhl" in Germany, and the German "Luizenhospital" in Aachen, provide medical treatment for the wounded Ukrainian soldiers. The problem is, that the Americans allocated only 18 beds, and the Germans 100, which, given the Ukrainian losses, looks like a simple propaganda move. Well, there is more to this than just propaganda though.

The Ukrainian soldiers talk much about how well they are being treated with the best European medicines. What actually transpires from these stories, however, is that in the best hospitals in Germany they are actively used as guinea pigs. Thus, in a documentary made by Moldovan journalists, one of the seriously wounded Ukrainian soldiers tells them how he was treated with “test medicines” worth more than 2,000 euros. That said, he appears very happy about the treatment offered him by the German medics. However, in the EU, the use of non-certified drugs is banned, and their testing requires a highly complicated bureaucratic procedure. European pharmaceutical companies have long been testing new drugs in Eastern Europe, primarily in Ukraine, where they actively tested various vaccines against COVID-19. We all remember well the network of US bio laboratories that operated in Ukraine, while not even formally controlled by the Ukrainian government. By the way, in their research the Americans focused on the study of resistant infections, their development, and ways to fight them. European doctors now have all the unique experimental material they need - seriously wounded people, who haven’t received adequate treatment in Ukrainian field hospitals and now suffer from various persistent infections, festering and infections. Well, since the bio labs have been closed for safety reasons, some of the wounded - the unique experimental material - were lucky to be sent to Europe to be studied and, at the same time, treated.

The EU has a very pragmatic approach to the ordinary wounded. In April, Germany allocated 2 billion euros to support refugees. Some of this money, allocated for the Ukrainian armed forces is meant for the "rehabilitation" of the wounded and for sending them back to the frontlines to keep "defending Europe" near Bakhmut and Kremennaya. Of the permanently crippled, only those who are selected as guinea pigs will luck out. The German medical elite is apparently happy to use this opportunity now that the biological laboratories in Ukraine have been shuttered. After all, US researchers will now have to share both the material for experiments and the results of their research. Looks like European medicine will soon be congratulated on new developments. Strangely, the issues of ethics and turning allies into guinea pigs do not bother the representatives of the country, which once found the courage to condemn its own countrymen - the "experimental doctors" Mengele and Eichmann.