French Ambassador: presidents of Russia and France set on mutual respect and trust 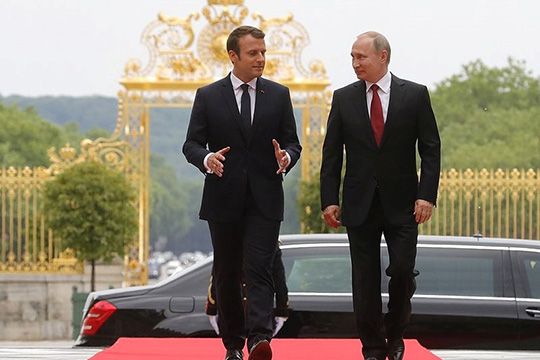 France expects to play a prominent role in Europe. A statement to this effect was made by French Ambassador to Russia, Sylvie-Agnes Bermann. A meeting with European leaders, which will be held in the Norman format in November, is set to "re-evaluate the relations" between Europe and Russia, the diplomat said.

“The new European leaders are more neutral towards Russia, they do not have the prejudices that the former ones had” (Sylvie-Agnes Bermann)

Despite the differences the French and Russian presidents reveal, the diplomat said, the two countries’ leaders are building relations of mutual respect and trust: “We are talking not only about crises, in Syria and Ukraine, but we also discuss bilateral relations.” According to the French ambassador, disagreements between Russia and France sprang up after the Ukrainian crisis. She calls for a solution that would allow "if not to lift, then to ease the sanctions." In her opinion, what could “open up a window of opportunity” is the flexibility of Vladimir Zelensky as a politician, and the “Norman format,” which, she said, could become a reality next month. Simultaneously, Sylvie-Agnes Bermann made it clear that “Russia is free to interpret” the events in Ukraine as it pleases, but Europe will always hold Moscow responsible for the annexation of Crimea and destabilization in Donbass.

That the meeting in the "Norman format" will be held in November has been reported by Reuters and Ukrainian Foreign Minister Vadim Priestayko. He indicated that the meeting can be held in Paris on condition a ceasefire takes effect and the export of weapons from eastern Ukraine stops. He added that the Ukrainian authorities are making the “last desperate attempt” to follow the Minsk agreements: “If this attempt fails, we will have to opt for Plan B.”

France’s intention to restore relations with Russia is also indicated by the meeting of foreign and defense ministers in the “2 + 2” format, which has not been held for 9 years. According to Sylvie-Agnes Bermann, Russia's involvement in military conflicts would not have made it possible to avoid these negotiations. “This is not for pleasure, and not to flatter Russia,” - she added. The participants in the meeting devised a road map which the diplomat described as "a vision not of the past but of the future, without mutual reproaches." Among the most pressing issues of bilateral relations, she mentioned the fight against terrorism, settlement of conflicts, cyber security, strategic stability, space research programs and nuclear energy.

“The sanctions will not be lifted tomorrow” (Sylvie-Agnes Bermann)

The major challenges for Europe, the French ambassador said, comprise the US withdrawal from peace treaties, the unpredictability of statements by "some presidents" and the US-Chinese confrontation. But Europe, she said, is interested in cooperation among all these parties. “In this context, the EU is not such a strong partner, it is not even an actor but rather an observer,”- Sylvie Agnes Bermann said. Political weakness is compensated by economic strength. The EU remains the world's largest trading bloc and Russia's top foreign trade partner. According to the French diplomat, Emmanuel Macron is striving for European autonomy: "We are going through a transition now - new people are due to come to power, take office, in particular, the new European Commissioner." However, she is confident that Europe will be able to strengthen its security.

Speaking about President Macron’s initiative to create a pan-European army, Sylvie-Agnes Bermann signaled progress. She emphasized that "the European army is a formula" and that in reality, we mean increasing our contribution to defense. “There is no UN or NATO army once a decision on the invasion has been passed and countries announce their readiness to contribute to the common cause on a voluntary basis,” - the diplomat explained. We also witness a better coordination in the security sector, following the broadening of powers and an increase in staff at Frontex (the EU agency for the security of external borders), the decision to establish a Common Defense Fund and the declaration on Europeans’ common participation in defense. “The position of President Trump, who is not particularly friendly towards Europe, can motivate Europeans to organize themselves ,” - the ambassador concluded.