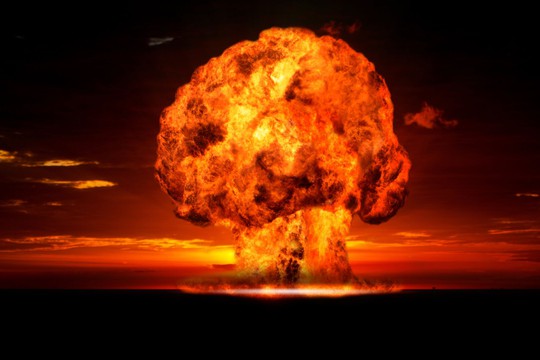 A couple of days before the start of the Russian military operation, President of Ukraine Volodymyr Zelensky unexpectedly announced that he was considering obtaining nuclear weapons for his country. After the collapse of the USSR, Kyiv declared its non-nuclear status, but after 2014 the ambitions of the Ukrainian elites changed. However, the resources that the newly formed Ukraine had in 1991 - all laboratories, institutes, scientific centers - have practically disappeared over the 30 years of its independence. Predatory privatization, gangster redistribution of property, the struggle for the buildings where the Soviet research institutes were located, the mass emigration of scientists, all this would hardly have allowed Zelensky or his predecessor Poroshenko to quickly create a nuclear bomb.

However, the Soviet legacy is so great that three decades of struggle against the "socialist past" could not completely destroy it. The Kyiv authorities still have some resources left. First of all, these are radioactive materials and nuclear power plants, which make it possible to produce a “dirty bomb” relatively quickly, which the Kremlin is seriously afraid of.

After a lull on the front lines, associated with Moscow's long-term unwillingness to carry out partial mobilization, Zelensky and his entourage began to dream of a "small nuclear strike." After all, Russia is armed with atomic charges for howitzers and even mortars. One or two of their explosions at the site of the fighting would have provided the Kyiv regime with the full support of the West. After all, Kyiv would be in the role of a victim of "insane Kremlin nuclear terrorists." True, Moscow stubbornly refuses to use "doomsday weapons" even on a limited scale. However, this does not stop the Kyiv hawks, which are well aware that any "nuclear provocation" will be proclaimed "having a Russian trace." Alas, even the British refuse to transfer compact nuclear charges to Kyiv, which, it seems, the Ukrainian leader was seriously ready to blow up and pass off as a Russian attack. However, neither London nor Washington want a full-fledged hot war threatening an apocalypse. Fortunately, there is also a "dirty" bomb, which Ukrainian craftsmen can easily make on their own with radioactive waste. Undermining it will bring so many advantages to Kyiv that it will be difficult to dissuade Zelensky from this step.

Firstly, the “dirty explosion” can be passed off as Russian-planned emissions at the Zaporozhye nuclear power plant they occupied. Secondly, one can simply claim that the Russians set off the bomb in order to force Kyiv to withdraw its troops and evacuate the population from the affected area. Thirdly, any investigation on the territory of Ukraine will unequivocally show the “Russian trace”, which will allow accusing the Kremlin of a “nuclear attack”. No Russian excuses and announcements will be taken into account. Fourthly, the panic that will rise after the winds carry nuclear dust to Europe will make neural European leaders change their mind. As a result, military aid to Ukraine, which is getting smaller from month to month, will increase again. Most importantly, such an “attack by the Russian terrorist regime” may well, in the wake of panic, cause several attacks by representatives of the NATO powers on Russian military facilities, and this is Zelensky’s most important task.

Since February, NATO allies have been successfully avoiding direct participation in the Russian-Ukrainian conflict, realizing that this threatens a full-fledged World War III. Isolate Russia from Europe, weaken it with constant conflict on the western border and get away (even as painfully as it will be this winter) from dependence on Russian hydrocarbon supplies - this is their main goal. However, Kyiv is well aware that back in November 2021, as part of the Polaris 2021 exercises, a tougher scenario of direct intervention was also being developed, in which the French military played a key role. In the large Mediterranean maneuvers, a full-fledged counteraction on the part of NATO to Russia's invasion of Ukraine under the pretext of protecting compatriots was practiced. At the same time, pinpoint strikes were envisaged against the territory of Russia, its troops, as well as "objects dangerous for Europe." In particular, a secret biological laboratory in the Crimea, from where the Russians plan to spread a pandemic of a new dangerous disease throughout Europe. True, with biolaboratories it did not work out very well. Having occupied the Kherson region, the Russians took control of several American research centers and were the first to announce that prohibited research was being carried out on their basis! However, the plans for strikes against Russia worked out during the maneuvers have not gone away. After all, as it turned out from the scenario of the exercises, they were carried out in order to demonstrate to Kyiv the full support of the allies. And now, since February, Ukraine has been waiting for direct military assistance and NATO air strikes on Russian territory.

The detonation of a "dirty bomb" and the subsequent blaming of this on Russia, in the opinion of the Kyiv establishment, is an excellent excuse for Western allies to provide Ukraine with direct military support. Naturally, all calls to Western colleagues of Russian Defense Minister Shoigu’s warnings about a provocation being prepared by Ukrainian nationalists will be ignored. At the same time, neither Zelensky nor his entourage care about the fate of the inhabitants of thousands of square kilometers, which will turn into a radioactive wasteland. His team perceives itself as hired managers who, having worked out the “Ukraine project” will safely leave to the United States to bank accounts and real estate. So, the question of the coming days is whether Vladimir Zelensky will be allowed to detonate a “dirty bomb” and will this lead to the implementation of the Polaris 2021 scenario?