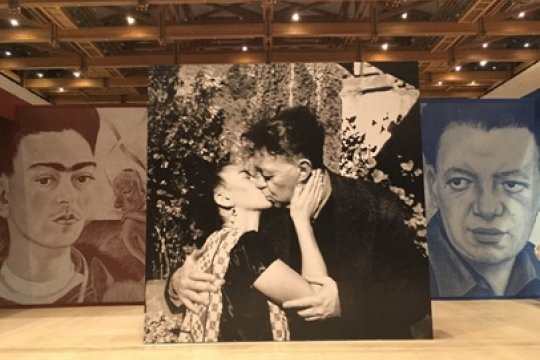 In the Moscow Central Manege from December 21, 2018 to February 22, 2019, the Link of Times cultural and historical foundation and Faberge Museum in St. Petersburg present the exhibition project "Viva la Vida. Frieda Kahlo and Diego Rivera. Paintings and drawings from museums and private collections”, dedicated to the most famous and vibrant couple of Latin American artists of the twentieth century.

For the first time, the organizers were able to combine over ninety works scattered around the world into one exposition, unique in size and content. The exhibition includes works from the Dolores Olmedo Museum (Mexico), the collection of Juan Coronel Rivera, the grandson of Diego Rivera, private collections in Europe and Latin America, as well as paintings from the Pushkin State Museum of Fine Arts, not previously exhibited in Russia, and archival documents. The appearance of such a large-scale international project in Russia is not accidental. The fates and ideals of Diego Rivera and Frida Kahlo were associated with the Soviet Union, which greatly influenced their work.

The organizers of the exhibition tried to emphasize both the diametrical opposite of two great Mexicans, and their inextricable link with each other.

The large space of the Manege exhibition hall is divided in two halves by the color: Frida’s part is painted maroon, and Diego’s one is blue. This symbolic division into two parts sends the viewer to their home in San Angel, which consisted of two interconnected buildings in which Kahlo and Rivera had separate workshops. This duality, which is reflected in the concept of this Manege project, presents their art as “typically feminine” and “typically masculine”. In addition, it clearly demonstrates their painful love and constant rivalry. Following this idea of the curators of the exhibition, the visitors pass through all the stages of life, creativity and relationships of these two artists.

You can describe the story of Frida and Diego in any genre - from family drama to detective novel, so much their fates were filled with historical events and the intensity of emotions. The bumps and twists of their personal and public lives were reflected in the artists’ works.

The fateful meeting for Diego Rivera, Frida Kahlo and the whole art community took place in 1928. This event determined all the further work of both artists, which is especially noticeable in the artifacts that are shown at the exhibition.

“I didn’t realize it then, but Frida became the main event of my life. And she remained as such until her death 27 years later. " This is how Diego Rivera remembered her.

But Kahlo wrote: “There were two accidents in my life. The first one - when the bus crashed into the tram and I was bedridden. The second one was the meeting with Diego.”

Rivera and Kahlo were united by belief in communist ideals. In 1910 the Mexican Revolution took place. Diego became the witness and singer of it. And Frida, becoming an adult, even wanted to change the year of her birth from 1907 to 1910, in order to be born with the revolution. They were both members of the Communist Party of Mexico.

Therefore, it was very natural for Diego Rivera to visit the USSR in 1927 and to participate in the celebration of the Great October Socialist Revolution tenth anniversary. During the parade and demonstration, he was standing on the tribune of the Lenin Mausoleum in Moscow. Later, Rivera constantly returned to subjects related to the revolution and its protagonists.

For example, he created a mural for the Rockefeller Center in New York. Unfortunately, it was subsequently destroyed because of the image of Vladimir Lenin on it, which Rivera categorically refused to remove even at the cost of losing the entire work. The revolution, as one of the main themes of Rivera’s works, is also presented at the exhibition in the Manege. 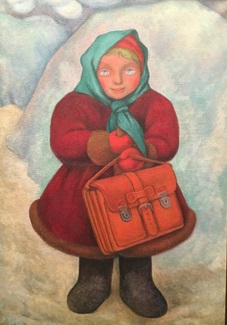 In 1955, Diego Rivera once again visited the USSR to undergo cancer treatment. Here he worked a lot, which resulted in a series of paintings. The exhibition presents “Russian Girl with Knapsack” (1956), “Boy with Sled” (1956), “Russian Nurse” (1956) and other works created by the artist during this period of his life.

At the exhibition, one can see some interesting photographs and materials from the Russian archives, those concerning Lev Trotsky’s visit to Mexico with his wife Natalia Sedova in 1936. Rivera, who was enchanted by the 1917 October Revolution, invited the guests from the USSR to stay at his house. Frida was the last woman Trotsky fell in love with. Subsequently, Diego was even suspected of involvement in his murder, but after a thorough investigation all charges were dismissed.

In 1947, thanks to the efforts of Konstantin Umansky, the Soviet ambassador in Mexico, and to the Mexican-Russian Institute, Mexican artists donated their paintings and graphic works to the Soviet Union. These works in the Manege are exhibited in a separate space. This collection also included “The Wounded Table” (1940) - the largest artwork created by Frida. After the death of Kahlo, Rivera took this work from the USSR to an exhibition in Warsaw, where the painting disappeared, and its fate is still unknown. 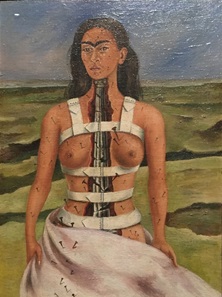 Frida throughout her life was accompanied by endless health problems. She poured out her physical and moral sufferings on canvases, as seen on the paintings “The Broken Column” (1944) and “Without Hope” (1945) presented at the exhibition. She turned the plaster corsets, which she had to wear, into art objects. They can also be seen in Moscow.

Kahlo became the first artist to expose the women’s hardships in modern society. This theme of Frida’s creativity appealed to the hearts of women in different parts of the world who realized the need to defend their rights. Feminists have made her their icon.

The exhibition helps visitors to trace how Kahlo grew in popularity and by the end of the twentieth century the cult of Frida – “Frida-mania” was formed. Bright, catchy outfits, black accrete eyebrows and a wreath in her hair became her calling card. Many books and films were produced about her, including the Hollywood film “Frida” (2002), with Salma Hayek starring. To date, Frida Kahlo is the most expensive artist in Latin America. The prices for her art works reach 7 million dollars. 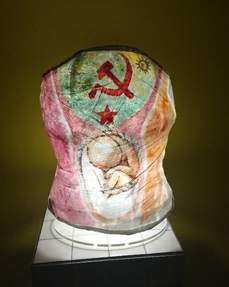 The project in Manege provides an opportunity to get acquainted with the national Mexican art, deeply rooted in pre-Columbian times. The organizers have compiled a diverse parallel program. Here you are invited to watch films, take part in performances or listen to one of the lectures, such as “Mexico. Traditions of ancient civilizations ". You will learn the amazing history and original culture of Mexico and uncover the secrets of its traditional cuisine. The visitors can take part in master classes on creating masks or painting plates in the Mexican style.