From an interview with His Holiness, Serbian Patriarch Porfiry, to the magazine "International Life" 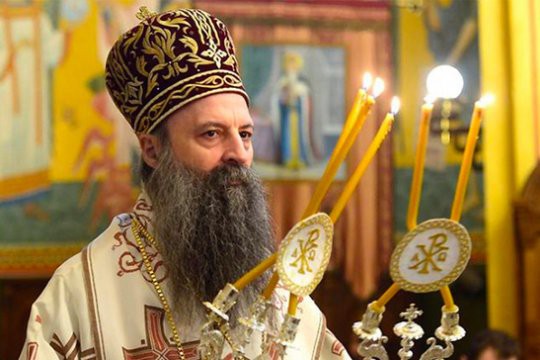 Your attitude to the creation of the non-canonical Orthodox Ukraine Church by the Constantinople Patriarchate is known. Now the Serbian Orthodox Church has a similar problem on its canonical territory in Montenegro. What could you say regarding these processes taking place in the Orthodox world?

Our position on the church issue in Ukraine is well known…I can only say that despite the amazing ease which the Constantinople Patriarchate has left without attention with the holy canons, ecclesiology, the age-old order of the Orthodox Church, the Sacred Tradition, we, in essence – like the sister Russian Orthodox Church, I am convinced - do not renounce our love for Mother Church and hope and pray that the day will come, and as soon as possible, when the non-Orthodox anti-Church influence and non-church projects, which, as I can see, have not brought anything good to anyone in Ukraine, will be rejected, and when we all return to brotherly love and pan-Orthodox solution of all problems in the spirit of the Church conciliarity.

We will not change our position. We provide and will continue to provide significant support to Metropolitan Onufriy and his Church. The analogy you have drawn a little earlier between Ukraine and Montenegro is not accurate enough, but it is clear. And we, like you, have survived the collapse of the federal state. In that event, the foes of Orthodoxy – and I would say the foes of Christianity - saw an opportunity to split the autocephalous or autonomous Churches. Therefore, we understand well what is happening in Ukraine. Therefore, we highly appreciate how His blessed Memory Patriarch Alexy guided the Russian Church Ship in those stormy and hard times, as well as how Patriarch Kirill - I boldly declare - leads it triumphantly in the third millennium. The widest freedom, complete autonomy in governance, which the Russian Orthodox Church has granted to the Ukrainian Orthodox Church, is an example of the manifestation of the highest iconomy and church consciousness.

Many in the Orthodox world today are discussing the consequences of the COVID-19 epidemic. Your predecessor, His Holiness Patriarch Irenaeus, took a strictly canonical position regarding the Worship order and the Sacrament giving. Attempts to desacralize the temple space, liturgy spoons, icons and crosses have caused an ambiguous reaction among the Orthodox. There have also been found such representatives of the Church who are in solidarity with such actions and allow the possibility to get infected from sacred objects. Does the Serbian Orthodox Church maintain continuity in these matters?

Beyond any doubt. In our Church in Belgrade and elsewhere, I know personally several priests who, for example, during the wave of the HIV epidemic, were confessors in hospitals where infected people were treating. They served the Liturgy every day, took communion together with the sick – and to this day they are alive and healthy. Imagine how many priests would have survived the current COVID-19 epidemic if the virus had been transmitted during communion? Very few. Therefore, this is not a question for us. We pray to God that the disease will pass as soon as possible, and that we, Orthodox Christians, like all other people, will not become victims of the deliberate spread of fears until then, and not only the fear of the virus, but also the fear of our near, whom we are advised to keep a social distance with. Being Orthodox, we follow the saying of the saintly fathers: I saw my brother's face, I saw my God, and not the idea that Sartre wrote about: my near is my hell. For the Church, for priests – I am sure, as well as for psychologists - the main question should be how people in these conditions could maintain spiritual health, God-given freedom.