From COVID-19 to «political virus»? 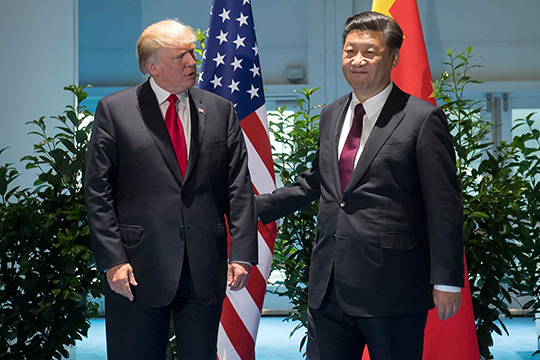 One of the recent trends in the United States of late is the spread, along with the coronavirus infection, of the “political virus”, which manifested itself in groundless and mendacious attacks on China. A statement to this effect was made by China’s Foreign Minister Wang Yi as he addressed a news conference in the aftermath of a session of the National People’s Congress (NPC).[1]

The metaphor cannot be more precise as anti-Chinese sentiments in the American political establishment spread as fast as an infection affecting all areas of US-China relations. The current coronavirus pandemic, being a common threat, could iron out the conflict (if for the time being) and could encourage the two parties to promote bilateral cooperation. Instead, it is triggering a split and distrust.

Even when what the United States says sounds reasonable, it means little in practice. In a document titled «United States Strategic Approach to the People’s Republic of China», published on the White House website, the Trump administration presents its logical arguments stating that the so-called “clear-eyed” analysis confirms that China is a strategic competitor in economy, ideology and national security. The United States, the document says, does not «seek to contain China’s development» and «welcomes cooperation with China where our interests align». However, the document makes a reservation to the effect that the US cooperation with China will be competitive and  will aim to achieve strategic objectives.[2] Judging by the logic, these objectives must suit Washington.

In an article published by American exerts under the suggestive title «Cooperate with China or Suffer» the authors say that there is no need to fall into self-deception: to counteract a threat that knows no national borders and protect an economy that is deeply integrated with the rest of the world is not something which can be handled single-handedly. But it’s far from certain that the United States will put these vital issues above geopolitical competition.[3]

The United States has been trying to impart its anti-Chinese phobias to European allies. As a result, Europe has started to signal the need to change the pattern of  relations with China after the pandemic to become less dependent on Chinese production chains.

But Europe hardly needs this at present. China and the EU have been maintaining dialogue for more than 20 years. After the first visit of the chairman of the People’s Republic of China to the EU headquarters in 2014 the two sides announced a joint construction of Chinese-European partnership in a number of prime areas, including peace and security, sustainable development, humanitarian exchanges and technological innovations.

As a result, China and the EU have built up trade and investment and have fostered finance cooperation. The European Union has been China’s major trade partner for 15 years. Speaking at the above mentioned conference, Chinese Foreign Minister Wang Yi pointed out: «China and the EU ought to promote comprehensive strategic partnership, rather than enter into a political and ideological rivalry. As we are faced with an unprecedented crisis, it is vital for us to shake off ideological differences, and instead of measuring others by our own yardsticks, express solidarity and join efforts in combating the pandemic».[4]

Donald Trump chose an unheard-of aggravation of relations with China, having broken ties with the WHO, which, in his opinion, has become a “Chinese puppet”, and imposed sanctions on Hong Kong over China’s activity on its territory.  Although the situation in Hong Kong is causing concern in Brussels, the European Union is not planning to introduce any restrictions against China yet.

The EU is interested in Hong Kong’s stability and prosperity on the basis of the principle “one country – two systems”, High Representative of the EU for Foreign Policy and Security Policy Josep Borrel said. German Chancellor Angela Merkel expressed her opinion: «The fact that there are fundamental differences between us cannot serve as an argument against exchanges, dialogue and cooperation, particularly at a time when we are witnessing a rapidly aggravating conflict between the United States and China». During its six-month presidency in the EU in the second half of the year Germany is planning to exert efforts to secure a settlement of the conflict between the United States and China, German Foreign Minister Heiko Maas said.

Such efforts have a pragmatic explanation as at stake is the signing of an important investment agreement with Beijing in 2020. Germany has been speaking in favor of the deal, due to be signed during an EU-China summit in September. However, the dialogue has been in a deadlock over disputes about access to either party’s market. Brussels may well back off from the deal if European investments in Hong Kong come to be viewed as “unwelcome”. This may trigger the loss of Hong Kong’s special status, though for now, Beijing assures all parties concerned that the principle “one country – two systems” will be retained.[5]

The coronavirus has created a new reality and brought to light a host of differences. The aggressive policy of the US threatens to throw the world into a new round of the Cold War. But unlike before, Washington cannot rely on such a staunch ally as united Europe, as this previously strong alliance is experiencing serious hardships. Brussels’ and Washington’s economic interests in a variety of areas no longer converge. Given the situation, Washington’s “war” against all promises to be fairly devastating in all senses of the word. Mutual distrust and disregard for international treaties may alter the present architecture of international relations irreversibly. The world structure, which has in many respects become global and interdependent, will have to be restored all the same in the near future. And considering that this goal is unachievable single-handed, the key players in this process will comprise, along with the United States, China, Russia, and the EU.