From Mladic to Gadhafi: Geopolitics Overrides Legitimacy of National Leaders 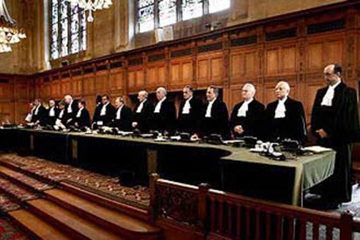 The arrest in Serbia of former Bosnian Serb army commander, legendary Gen. R. Mladic and the statement on the illegitimacy of Gadhafi’s rule in Libya issued collectively at the G8 summit in Deauville combine neatly within the same paradigm: in a unipolar world, as long as it continues to exist, leaders of the countries outside of the top league are not entitled to independent policies.

It was clear from the outset that the Serbian pro-Western ruling coalition with president B. Tadic at the helm would not dish out Mladic to the ICTY, thus sacrificing national interests and pride to the West. The arrest and extradition of R. Karadzic, formerly the president of the Serbian republic in Bosnia, and Belgrade’s thinly disguised drift towards a de facto reconciliation over Kosovo killed any illusions that the Serbian administration might defy the West’s pressure on any serious issue. As an eloquent gesture, Tadic’s team largely trained by Western PR gurus back in the late 1990ies synchronized the arrest of Mladic with the opening of the G8 summit and the tours of Serbia by EU delegations led by two Brussels dignitaries - one by President of the European Commission José Manuel Barroso, another - by High Representative of the EU for Foreign Affairs and Security Policy Catherine Ashton. If the plan was to impress, the attempt must be credited with success: almost simultaneously, French President N. Sarkozy happily broke the news in Deauville and Barroso, just back from Belgrade, acknowledged the receipt by the EU of a “positive message” from Serbia.

Still, the hype around Mladic’s arrest and extradition to the Hague do not mean that Serbia’s invitation to the EU is on the way. Sarkozy, Barroso, and Ashton alike praised the move as the country’s another step - one of quite a few left- towards reaching the goal. Estimates of the time it will take Serbia to earn a EU membership converge on 6-7 years during which the country will have to respond to a whole array of demands. The West’s wish list includes the arrest and extradition of former leader of Croatia’s Serbs Goran Hadzic, the recognition of the independence of Kosovo, and the tailoring of Serbia’s own statehood aimed at boosting regional autonomies to the point of converting the country into a conglomerate of loosely linked territories. The pressure on Serbia over the Kosovo theme will likely top the EU Balkan agenda in the nearest future, but generally the spectrum of EU requirements Belgrade must face will be widening non-stop.

Given its current condition, the EU obviously has more pressing issues to deal with than accommodating Serbia. The West needs Serbia only as a perpetually rogue state whose very existence helps justify the NATO intervention in the Yugoslavian crisis in the early 1990ies, the 1999 ruthless bombings of the country, the staunch support for the cause of the Kosovo separatism, and the military presence of NATO, the US, and the EU in the strategic Balkans. Serbia’s pro-Western political forces make playing the game easier for the West but - no matter what concessions they lead the country to make - do not help it gain a status comparable to those of other EU hopefuls. As a result, Serbia’s chances to be admitted to the EU - with Mladic at large or with Mladic sold, even with or without Tadic - are nonexistent.

Instead, what the extradition to the Hague of key Serb figures wanted by the tribunal affects is the situation around embattled countries like Libya and Syria. For example, the arrest of Mladic whom the West accepted as a legitimate negotiation partner when the 1995 Dayton deal was in the making, further makes the legitimacy of the status of any sovereign country leader dependent on geopolitical dynamics rather than on the corresponding nation’s political choice.

A day after the arrest of Mladic, the G8 summit upheld in a chorus the view that Gadhafi was illegitimate as the leader of Libya. The summit’s declaration additionally called into question the legitimacy of Libya’s entire administration. At the same time, Russia’s summit partners secured the consent of Moscow to mediate in the Libyan settlement. Mediation in talks with a country leader a priori declared illegitimate is a mission unheard of in the history of diplomacy. Even the stories of the negotiations on Bosnia and Kosovo did not have to unfold in such an absurd framework.

Mladic and Karadzic , both immensely popular in the Serbian Republic in Bosnia, were instrumental in bringing the Dayton accords to the signing phase. In 1999, S. Milosevic was given guarantees - sealed by Russia, importantly - that the peacekeeping mission in Kosovo would materialize under the UN flag and that, contrary to NATO’s wishes, the international forces deployed in Kosovo would not be authorized to move around the rest of Yugoslavia. Neither the world’s key powers nor NATO officially put the regime change in Belgrade on the agenda at the time of the penning of the June 9, 1999 Yugoslavia-NATO military-technical deal, the passing of the UN Security Council Resolution 1244, or the deployment of KFOR. Nevertheless, the charges over Kosovo pressed against Milosevic - strikingly similar to those currently leveled against Gadhafi - became the basis of the indictment eventually produced in the Hague. No official document carried the idea that the allegations could somehow erode Milosevic’s legitimacy, it should be noted.

In other words, at the moment Gadhafi cannot expect to be given by NATO or Russia even the guarantees like those Milosevic received as part of the package ending the air strikes on Belgrade. Unlike Karadzic and Mladic in Bosnia and Herzegovina, he will not get a role in the settlement in Libya.

In 1999,The  Boston Globe wrote that, somewhat surprisingly, prevalence in crises like the Kosovo one relying solely on air raids was possible. These days, the view is commonplace in NATO, and the list of country leaders - those ranging from Syria and Iran to Pakistan and North Korea - whose legitimacy can be annulled in a single move counts quite a few candidates. In fact, it is long enough to handle one country per G8 summit...