From WWI to www 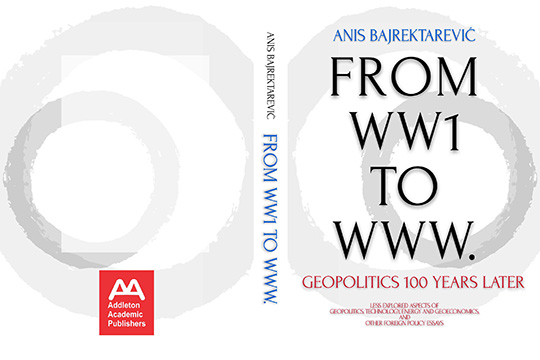 It is an honor to present to our readers our esteemed alumni colleague and friend Professor Anis Bajrektarević and his newly released bookFrom WWI to www. 1919-2019 – Less Explored aspects of Geopolitics, Technology, Energy and Geoeconomics. This is his 7th authored book (4th for the US publishers and the second for the New York-based Addleton Academic Publishers). He is both teaching and research professor on subjects such as the Geopolitics, International and EU Law, Sustainable Development (institutions and instruments), and Political systems.

On the subject Geopolitical Affairs alone, professor has over 1,200 teaching hours at his university as well as in many countries on all meridians. His writings are frequently published, so far in over 50 countries of all five continents, and translated in some 20 languages worldwide. He lives in Vienna, Austria.

For his previous book by the Addleton, Geopolitics of Technology – Is There Life after Facebook, former Austrian Foreign Minister Peter Jankowitsch has said: “Insightful, compelling and original, this book is an exciting journey through the rocky field of geopolitics. It is also a big-thinking exploration of the least researched aspects of the discipline, which will leave no one indifferent. This book, written by an experienced lawyer and a former career diplomat, cleverly questions how we see the world, and acts as an eye opener.”

And, the World Security Network’s Senior Vice President, rt. Brig general of the German Army, close aid to the former NATO Gen-Secretary Manfred Wörner and author of 5 books on security, Dieter Farwick has noted: "The presence and future of our globalised, interwoven world has become so difficult to comprehend that many people refrain from even trying to understand it. It is the merit of Professor Anis Bajrektarevic to fill this gap with excellent analyses brought together in his brilliant book. It is a must read for those who want to get a better understanding of the complex world and who want to contribute to a better and safer world."

Commenting the previous book of professor, Dr. Franz Fischler, EU Commissioner (1995–04), President of the European Forum Apbach, have stated: ”The book of prof. Anis …  will help to understand better the security structures … and can form a base for improvements in the interrelations between … diverse continents.”  On the same title Dr. Cheng Yu Chin, Director, EU-China Economics and Politics Institute noted: “Excellent news – with this book – for those who argue that European multilateralism is a right solution … out of a lasting crisis. This fascinating comparative read further navigates those of academia and practitioners who want to steer us towards stabile Europe and prosperous Euro-MED.”

We, briefly, introduce some of the views of experts in international relations and history about the newly released book of professor Bajrektarevic From WWI to www. 1919-2019:

Endorsing his newest book, Yale university doctor, philosophy of history professor Emanuel Paparella notes: “A year or so ago I began reading and pondering the political writings of Prof. Anis Bajrektarevic. Plenty of food for thought, I am still reading them. What attracted me to them was their invariable lucidity and coherence of thought buttressed by well reasoned and well balanced logical arguments culminating in insightful conclusions. This is quite rare nowadays and when encountered it comes across like a breath of fresh air. What prevails nowadays are political tracts that often espouse and promote an ideology, often fanatically defended tooth and nail and in- variably leading not to dialogue or symposiums but to diatribes generating much heat and little light… To be convinced of all this, all that the reader has to do is pick up Bajrektarevic book and begin reading. One will not be disappointed.”

History never ended during the last century.  Anis Bajrektarevic offers a vivid, captivating take on the wrenching, convulsive swirl of isms, campaigns, and cultural forces that have punctuated global affairs over the last 100 years. It's useful to be reminded of the regular episodes of tragic hubris that define our historic record.

Based on critical analysis and pungent observations Professor Bajrektarevic provides an eye-opening contribution to the question what has gone wrong in Europe in the last 100 years.

His book is an overdue and uncomfortable counter-opinion to the prevailing view and conventional wisdom in the West.

A complex study on geopolitical affairs, this book gives us a key for understanding the origins of pan-European ideas, and far beyond.

Comprehensive, focused and immediately useful, From WWI to www. Geopolitics 100 Years Later is an articulate and highly readable synthesis of current thinking on geopolitics in a modern framework. This should be recommended reading for all global leaders and academic professionals.

Incisively provocative, "WW1 to www: Geopolitics 100 Years Later" is the definitive analysis of the last century of Europe's  transition to democratic liberalism. As an international affairs specialist, I highly recommend it as a must-read for those seeking an understanding of the complex of contradictions that is the enigma of today's unified Europe.

By looking back at history and at different topics and issues, author proposes a very deep and rich reflection on what rendered possible European integration and what kind of limitations it faces today. Every scholar, student or motivated citizen interested in the future of international relations, concerned by the current evolutions of politics in Europe and elsewhere, should pick up Anis Bajrektarević’s book.

Prof. Bajrektarevic challenges us to revisit history in a new light and take another look at current global policies and structures. Insightful and thought provoking writings on global issues, past and present.

Brilliant, riveting, challenging!  Professor prompts us to think deeper about history and today’s global issues in this wonderful book.

Finally, let us close with the authors word:

Throughout the most of human evolution both progress as well as its horizontal transmission was extremely slow, occasional and tedious a process. Well into the classic period of Alexander the Macedonian and his glorious Alexandrian library, the speed of our knowledge transfers – however moderate, analogue and conservative – was still always surpassing snaillike cycles of our breakthroughs. When our sporadic breakthroughs finally turned to be faster than the velocity of their infrequent transmissions – that very event marked a point of our departure.

Simply, our civilizations started to significantly differentiate from each other in their respective techno-agrarian, politico-military, ethno-religious and ideological, and economic setups. In the eve of grand discoveries, that very event transformed wars and famine from the low-impact and local, into the bigger and cross-continental. Faster cycles of technological breakthroughs, patents and discoveries than their own transfers, primarily occurred on the Old continent.

That occurancy, with all its reorganizational effects, radically reconfigured societies – to the point of polarizing world onto the two: (anthropo-geographically inverted) centar and periphery. This was a birth of Europe as we know it today.

For the past few centuries, peripheries lived fear but dreamt a hope of Europeans – all for the sake of modern times. From WWI to www. Is this modernity of internet age, with all the suddenly reviled breakthroughs and their instant transmission, now harboring us in a bay of fairness, harmony and overall reconciliation?

Shall we stop short at the Kantian dream, or continue to the Hobbesian realities and grasp for an objective, geopolitical definition of our currents.

This book is my modest contribution to the most pressing of all debates: Our common futures. I am happy if You see it that way too.